Brewing above the Bridge 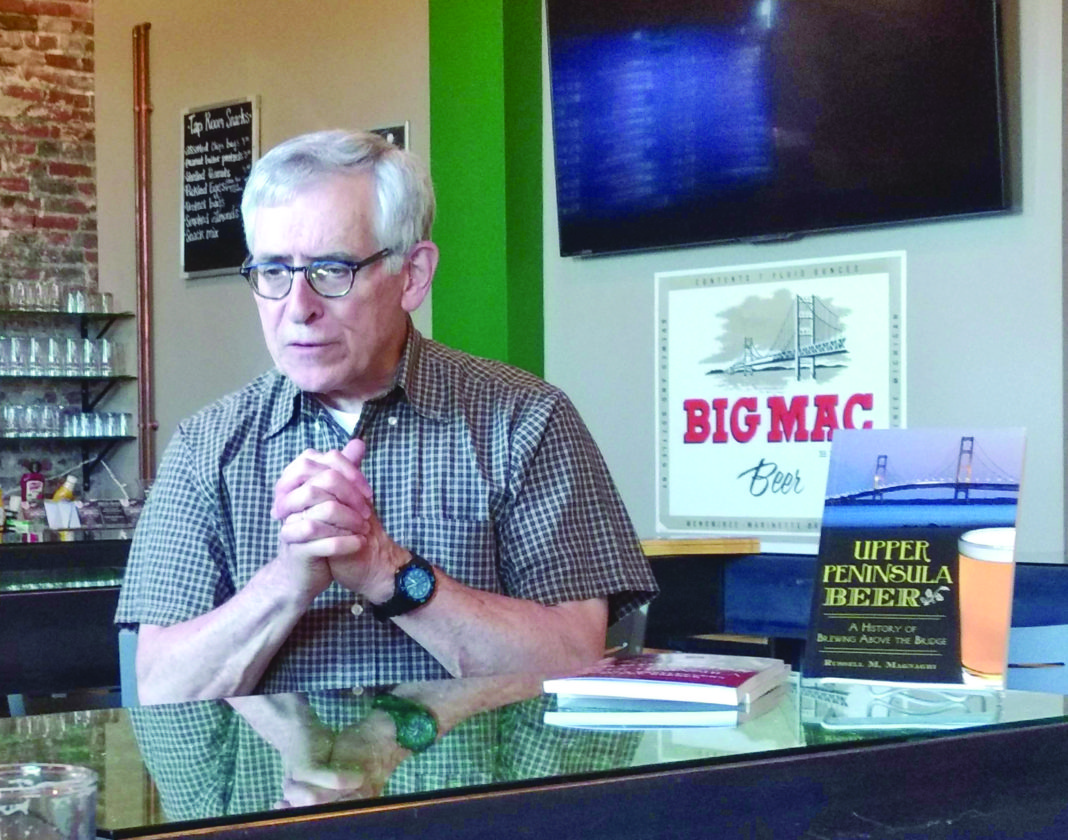 Dr. Russell Magnaghi, a former regional history professor at Northern Michigan University and author of several books, including “Upper Peninsula Beer,” which is located to his right, discusses the prohibition and history of brewing beer in the Upper Peninsula at Iron Bay Tuesday afternoon. (Journal photos by Jaymie Depew)

From Thursday’s Peace Pie Company and Cognition beer pairing event, to a Tuesday showing of the Upper Peninsula-based film “Anatomy of a Murder,” all of the events seemed to correlate regional modernity with history.

Iron Bay, a former 1800s foundry site that turned into a dance hall a century later, kicked off its History on Draft series Tuesday afternoon with a presentation by Dr. Russell Magnaghi, a former regional history professor at Northern Michigan University, as part of its anniversary celebration.

In great detail, Magnaghi, who has spent hours interviewing brewers and their families for books he authored, highlighted the history of brewing in the U.P. and how prohibition affected the area. Both topics are separate points of focus in his two books: “Prohibition in the Upper Peninsula: Booze & Bootleggers on the Border” and “Upper Peninsula Beer: A History of Brewing Above the Bridge.” The books are currently displayed at the Iron Bay Tap Room, located at 105 E. Washington St., Marquette, and are available for purchase.

Beer brewing came to the U.P. in the 1600s when French fur traders substituted pine needles for hops in batches of spruce beer, Magnaghi said, adding that it was considered “liquid bread” for entire families, including children.

In the 1800s German immigrants opened several breweries throughout the U.P. after being drawn by the mining boom. One of the first commercial breweries opened in Sault Ste. Marie in 1850. It didn’t take long until every major town in the U.P. had a brewery or saloon, Magnaghi said, adding that even the grandfather of John Voelker, a local author who wrote “Anatomy of a Murder,” owned a brewery and saloon in Negaunee.

“They thought the Sault was the gateway to the Lake Superior basin,” Magnaghi said. “As the mines opened up and more people came into the area, the population shifted to the Copper Country so the Germans that were at the Sault moved westward.

“Two breweries were in Menominee, two in Escanaba, Iron Mountain, Bessemer … All the major towns had breweries and some of them were large enough to ship their beer by train across the Upper Peninsula. It turned into a major operation,” he said. “Everything was going fine until rumblings of the prohibition, which came to Michigan 18 months before the national prohibition.”

Since Michigan’s prohibition started early, Magnaghi said a popular joke was: “If you want to know how to violate the prohibition law, check with a Michiganian because they’ll know all about it.”

Most of the breweries closed down during Prohibition, Magnaghi said, including the Upper Peninsula Brewing Company, which was located in the historic building that looks like an old castle along Meeske Avenue in Marquette. The building now houses the Numinen, DeForge & Toutant, P.C. law firm.

“The Upper Peninsula brewery had a big beer garden, band stand … it was a destination for people — the only brewery that was that elaborate at that time,” Magnaghi said.

Listed on the National Register of Historic Places in 1980, the 1894 structure served as the home and office of brewer Charles Meeske, secretary-treasurer and later president of the company.

The original 42-acre complex included warehouses, residences, a tower and a bottling plant. Only two buildings remain to this day.

“Meeske never reopened the peninsula brewery because he was so upset,” Magnaghi said. “Local breweries started to make soda water and sometimes near-beer … but sometimes they forgot to take the alcohol out of the near-beer and would be greeted by officials.”

Although most of the breweries closed down, Bosch Brewery in the Copper Country, which is now the home of Red Jacket Brewing Co., continued until the1960s.

“At one point, to get people interested, Bosch had sauna beer,” Magnaghi said. “They worked with a brewery in Finland to come up with this sauna beer, but it didn’t work out and they ended up selling the whole thing with its recipes to Leinenkugel (Jacob Leinenkugel Brewing Company, of Chippewa Falls, Wisconsin).”

“Hereford and Hops was the first opened in the U.P., followed by the Vierling and the brewery in Grand Marais,” he said. “People continue to drink beer and it’s been a very successful enterprise over the decades. People will go on beer-vacations even, where they map out a trip to visit the breweries, rather than waterfalls and the lake.”

While researching for his books, Magnaghi said one of the most humorous stories he encountered pertained to a former brewery in Manistique.

“They would throw the batch of beer out and the deer would come in and they found out that the deer were getting drunk on the stuff. So they put a big 12-foot fence around the area where they stashed it,” he said.

Currently, Michigan has over 200 craft breweries in the state and growing, Magnaghi said.

Last year, Michigan’s craft beer industry contributed more than $144 million in wages and around $600 million in economic contributions, according to a press release issued by the Michigan Brewers Guild.

The guild, which was established to promote and protect the Michigan craft beer industry, recently celebrated 20 years of being the industry’s official voice in Lansing.

Scott Graham, executive director of the guild, previously told The Mining Journal that craft breweries are still highly regulated and that the breweries pay both federal and state taxes.