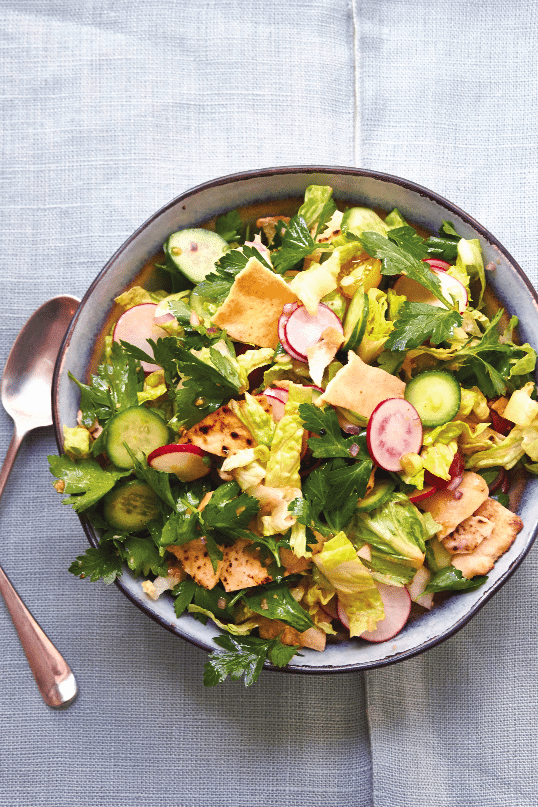 This 2018 photo shows a fattoush in New York. This dish is from a recipe by Katie Workman. (Mia via AP)

During the month of Ramadan, observant Muslims perform daily fasts from dawn to dusk, only breaking the fast with a meal (usually a light one) after the sun sets.

Fasting is intended to cleanse the soul, allowing Muslims to turn their attention inward, toward charity work and prayer, and away from material things.

One of the dishes on many tables in Levantine countries during Ramadan is fattoush. It may be served during the evening break fasts, and is often part of the celebratory spread that marks the end of the month of abstinence.

Many countries have a version of fattoush. As with many cross-cultural dishes, researching the different varieties is both fun and slightly exhausting. There’s always some type of flatbread, such as pita, and tomatoes and cucumbers. But then … lettuce or no lettuce? Vegetables sliced or diced? Radishes? Peppers? Lemon or lime juice? A bit of sweetener? Sumac? Choices to be made.

Mince your garlic as much as you can so that it really blends into the dressing. A way to get it super-fine is to chop it quite a bit, then sprinkle on a bit of salt and drag the flat side of the knife blade across the garlic several times, pressing down as you go to create a paste. Chop some more, drag the knife over it once again, repeat, and soon you will have a fine garlic paste.

I used a little pomegranate syrup in my dressing because I had a bottle lying around (which I realize is not normal for most American cooks). Use honey if you are not as ingredient-nerdy as I am (or you can find the syrup online or in a specialty foods store).

Sumac is a spice made from berries that grow wild on bushes in Lebanon and other countries in the region; it’s a classic fattoush seasoning. The flavor is tart and tangy. You could use that instead of the za’atar, which is a lovely, tangy and earthy combination of sumac, thyme, sesame and marjoram (sometimes cumin), and is often easier to find in supermarkets.

Preheat the oven to 375 degrees F. Make the Pita Crisps. Brush the tops of the pitas with the tablespoon of olive oil, sprinkle with salt and za’atar. Place on a baking sheet and bake for 4 to 5 minutes, until toasted and crisp. Remove and let cool.

Make the Vinaigrette: In a small bowl, combine the 1/4 cup olive oil, lime juice, pomegranate syrup or honey, garlic, mint, za’atar, and salt and pepper. Pour the dressing over the salad and toss well.

Break the cooled pita into pieces about 1-inch large (they will be uneven) and add them to the salad just before serving. Give a final toss, let sit for 5 minutes so the pita starts to soften just slightly in the dressing, and serve.