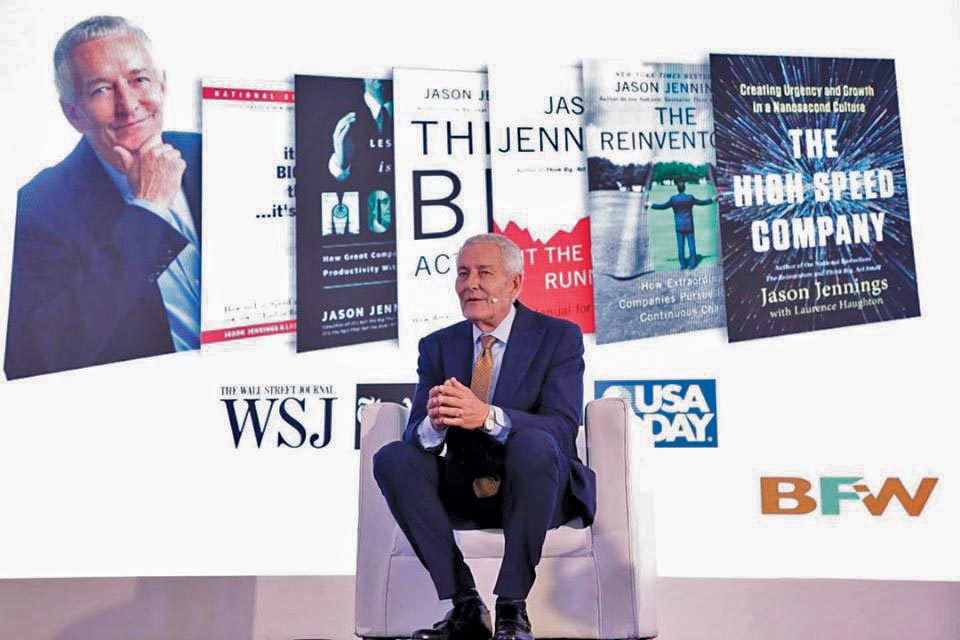 Negaunee High School graduate Jason Jennings, who was a world-renowned author and motivational speaker, passed away on May 19. He was 67 years old. Jennings traveled to over 100 countries in his storied career. His one true passion, his family said,, was connecting with people. (Courtesy photo)

NEGAUNEE — World-renowned author and motivational speaker and Negaunee High School graduate Jason Jennings was inspired by people, so it’s no wonder he served as an inspiration to others throughout his life.

“Jason loved people, probably more than anything, and that crossed over obviously from his work profession to his personal life,” his sister Tanya Jennings said. “I would say he had this insatiable appetite to know people. He wanted to know who they were, what their story was, what made them tick, what their culture was. He spent a tremendous amount of time knowing who, what, where so that he fully understood who he was speaking to and he was really able to make them his captive audience.”

Jason Jennings, who passed away on May 19 — about a week before his 67th birthday — had authored eight books and was working on his ninth. He had delivered hundreds of motivational speeches to companies and organizations all over the world.

USA Today once ranked Jason Jennings “one of the three most in-demand business speakers on the planet.”

While Jason Jennings would end up living in California full-time for much of his adult life, he spent the early part of his childhood in Newberry before his family moved to Negaunee in the mid-1960s.

Tanya Jennings describes their upbringing, along with fellow siblings John and Jeff, as typical.

“Then, we moved to Negaunee, where both sets of grandparents lived and we lived about a block away from them. And, again we lived in these small neighborhoods. You generally played with kids that lived around where you lived,” Tanya Jennings said. “So we played outside mid-morning until early evening. You know, you always had to be home for dinner, and you had to be home when it started getting dark.”

By the time he entered junior high school in Negaunee, Jason Jennings had already developed a gift for public speaking and an interest in radio.

“Jason and a friend built a transmitter, and connected to a frequency and were actually spinning records,” she said. “I remember because he made me sit at the kitchen table and take requests.”

True to form, in high school, Jason Jennings worked for a radio station in west Ishpeming where he stayed until the early 1970s when he moved to downstate Southfield.

He had attended Northern Michigan University for a year in 1970 before transferring to the University of Detroit Mercy, earning a bachelor’s degree in political science, according to a 2017 Mining Journal article.

He worked in talk radio there for a while, she said, before transitioning into marketing, eventually moving to California to become the youngest radio station group owner in the nation.

He later founded a media consulting firm where his programming and sales strategies are credited with revolutionizing parts of the broadcasting industry.

Tanya Jennings said Jason Jennings and his long time partner George Staubli had spent summers at the log home they built on Petticoat Lake for over a decade.

“They spent a lot of time there. It was nice. And I think they really just were pretty much laid back,” Tanya Jennings said. “They would do a lot of hiking, walking, they would do a lot of little car day trips when Jason would show George some of the parts to the Upper Peninsula, some of the … places that he remembered visiting as a child. It was a time, I think to just appreciate nature and enjoy the slower pace. And for Jason, I think it was an opportunity to reconnect and recharge.”

Jason Jennings was passionate about learning new things and delving into new cultures. He could speak several languages and visited over 100 countries in his storied career.

But he also took time for simpler things. He learned how to play the viola at the age of 50, and always made time for his family, bringing first his grandparents, and then, his mother for extended stays in California over the winter.

She said Jason Jennings continued to be family-minded and people-focused later in his life, a pattern she credits, in part, to his U.P. upbringing.

“You know, I do remember my dad being involved in (the) community,” she said. “He thought that Negaunee was the greatest place to live and the only place to live. And my dad loved people, Jason loved people, I work in HR, working with people. My other brother teaches, so obviously he is involved with kids. My other brother works for Lakeshore, he is in quality management type (of) things. He works with people. That would be the one thing…you can always be involved in people and you can always be kind to people.”

She said her brother never forgot his family or his U.P. roots.

“As much as he was — as my mom would say, ‘hobnobbing with the best of them,’ he never forgot where he came from and what family was, he was always very, very connected to family.”

Perhaps the best description of Jason Jennings comes from the night when he was the keynote speaker at NMU spring commencement in 2017.

In introducing Jennings at a reception the night before the ceremony NMU President Fritz Erickson said: “I’ve told you about Jason’s accomplishments, but I want to add one more thing,” concluding, “I’ve spoken to many people about Jason and the one word that’s always used to describe him is that he’s a nice man.”