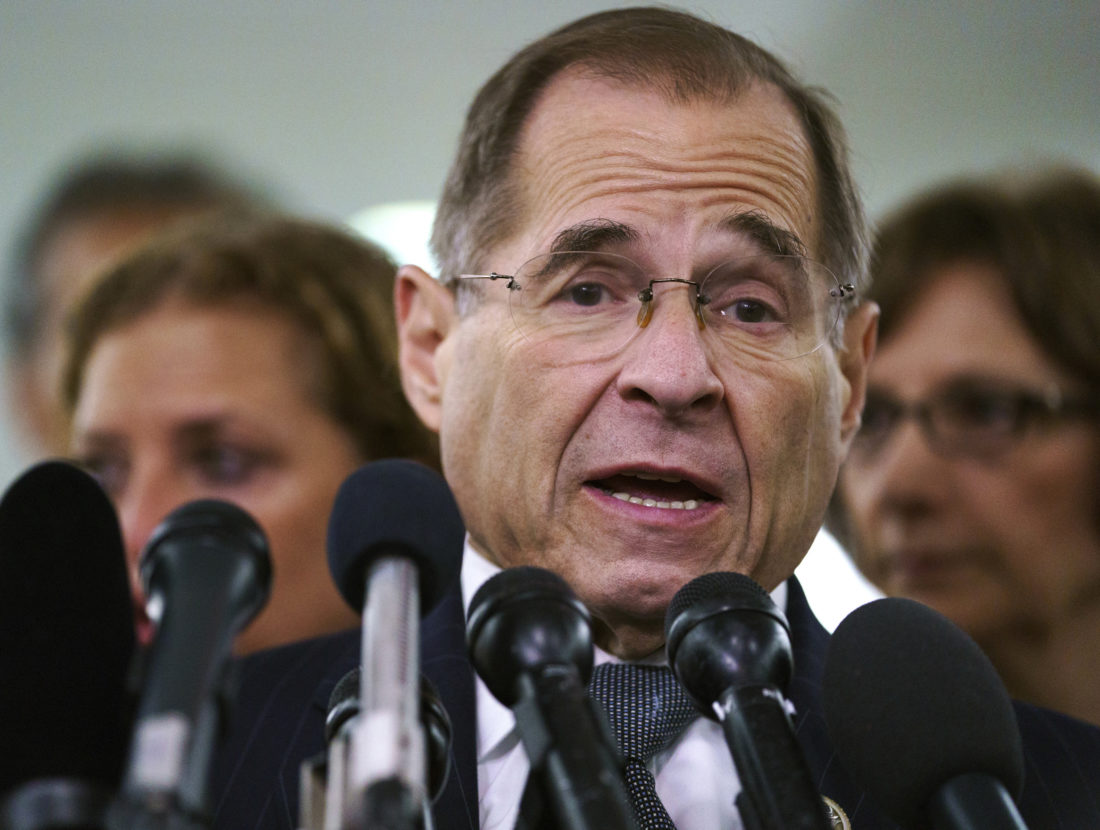 FILE - In this Sept. 28, 2018, file photo, House Judiciary Committee ranking member Jerry Nadler, D-N.Y., talks to media during a Senate Judiciary Committee hearing on Capitol Hill in Washington. Nadler, the top Democrat on the House Judiciary Committee says he believes it would be an "impeachable offense" if it's proven that President Donald Trump directed illegal hush-money payments to women during the 2016 campaign. But Nadler, who’s expected to chair the panel in January, says it remains to be seen whether that crime alone would justify Congress launching impeachment proceedings. (AP Photo/Carolyn Kaster, File)

WASHINGTON (AP) — Top House Democrats have raised the prospect of impeachment or the real possibility of prison time for President Donald Trump if it’s proved that he directed illegal hush-money payments to women, adding to the legal pressure on the president over the Russia investigation and other scandals.

“There’s a very real prospect that on the day Donald Trump leaves office, the Justice Department may indict him, that he may be the first president in quite some time to face the real prospect of jail time,” said Rep. Adam Schiff, the incoming chairman of the House intelligence committee.

“The bigger pardon question may come down the road as the next president has to determine whether to pardon Donald Trump.”

Rep. Jerry Nadler, the incoming chairman of the House Judiciary Committee, described the details in prosecutors’ filings Friday in the case of Trump’s former personal lawyer, Michael Cohen, as evidence that Trump was “at the center of a massive fraud.”

“They would be impeachable offenses,” Nadler said.

In the filings, prosecutors in New York for the first time link Trump to a federal crime of illegal payments to buy the silence of two women during the 2016 campaign. Special counsel Robert Mueller’s office also laid out previously undisclosed contacts between Trump associates and Russian intermediaries and suggested the Kremlin aimed early on to influence Trump and his Republican campaign by playing to both his political and personal business interests.

Trump has denied wrongdoing and has compared the investigations to a “witch hunt.”

Nadler, D-N.Y., said it was too early to say whether Congress would pursue impeachment proceedings based on the illegal payments alone because lawmakers would need to weigh the gravity of the offense to justify “overturning” the 2016 election. Nadler and other lawmakers said Sunday they would await additional details from Mueller’s investigation into Russian election interference and possible coordination with the Trump campaign to determine the extent of Trump’s misconduct.

Regarding the illegal payments, “whether they are important enough to justify an impeachment is a different question, but certainly they’d be impeachable offenses because even though they were committed before the president became president, they were committed in the service of fraudulently obtaining the office,” Nadler said.

Mueller has not said when he will complete a report of any findings, and it isn’t clear that any such report would be made available to Congress. That would be up to the attorney general. Trump on Friday said he would nominate former Attorney General William Barr to the post to succeed Jeff Sessions.

Nadler indicated that Democrats, who will control the House in January, will step up their own investigations. He said Congress, the Justice Department and the special counsel need to dig deeper into the allegations, which include questions about whether Trump lied about his business arrangements with Russians and about possible obstruction of justice.

Schiff, D-Calif., also stressed a need to wait “until we see the full picture.” He has previously indicated his panel would seek to look into the Trump family’s business ties with Russia.

“I think we also need to see this as a part of a broader pattern of potential misconduct by the president, and it’s that broad pattern, I think, that will lead us to a conclusion about whether it rises to the level to warrant removal from office,” Schiff said.