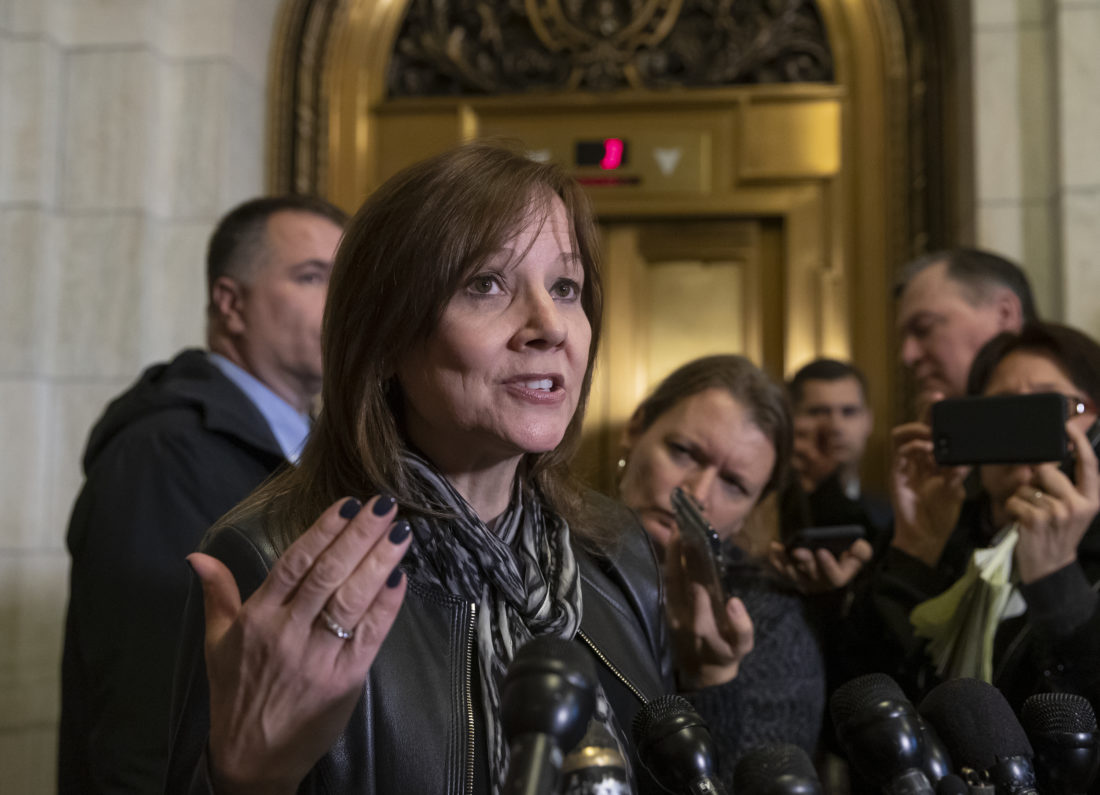 General Motors CEO Mary Barra speaks to reporters after a meeting with Sen. Sherrod Brown, D-Ohio, and Sen. Rob Portman, R-Ohio, to discuss GM's announcement it would stop making the Chevy Cruze at its Lordstown, Ohio, plant, part of a massive restructuring for the Detroit-based automaker, on Capitol Hill in Washington, Wednesday, Dec. 5, 2018. General Motors is fighting to retain a valuable tax credit for electric vehicles as the nation's largest automaker grapples with the political fallout triggered by its plans to shutter several U.S. factories and shed thousands of workers. (AP Photo/J. Scott Applewhite)

WASHINGTON (AP) — General Motors is fighting to retain a valuable tax credit for electric vehicles as the nation’s largest automaker tries to deal with the political fallout triggered by its plans to shutter several U.S. factories and shed thousands of workers.

Preserving the $7,500 tax incentive for buyers is crucial for GM as the company pivots from internal combustion engines in favor of building cars powered by batteries or hydrogen fuel cells. Yet the layoffs and plant closings could imperil GM’s push to keep the incentive. It helps make plug-ins such as the $36,000 Chevy Bolt more affordable at a time when competition from other electric vehicle makers is heating up.

GM faces opposition from President Donald Trump and other Republicans who consider the credit a waste of taxpayer money and want it eliminated. Trump, who has pledged a manufacturing rebirth in the Midwest, reacted angrily to GM’s “transformation “ announcement late last month, declaring that his administration was “looking at cutting all GM subsidies, including for electric cars.”

The company already is on the verge of being phased out of the tax credit program unless Congress changes a law that caps the break at 200,000 vehicles per manufacturer. Without the incentive, GM may be forced to cut the price of its electric cars to keep prospective customers from taking their business elsewhere, according to automotive industry experts.

As evidence of the credit’s importance to GM’s future, the automaker has expanded its lobbying footprint in Washington and even joined forces with two rivals, Tesla and Nissan, to call for 200,000-vehicle limit to be scrapped.

Standing in the way of that goal is Sen. John Barrasso, R-Wyo., the chairman of the Senate Environment and Public Works Committee. Barrasso introduced legislation in October to abolish the tax credit, a move he said would save about $20 billion over the next 10 years. He has argued the market for electric vehicles is already established and “no longer needs the crutch of government assistance.”

“The idea of the subsidies had to do with trying to make sure that electric vehicles would be a viable technology,” Barrasso said. “Well, that’s clearly there.”

The tax credit came up briefly during a private meeting on Wednesday between Ohio’s senators, Republican Rob Portman and Democrat Sherrod Brown, and GM chief executive Mary Barra, according to a congressional aide familiar with the conversation.