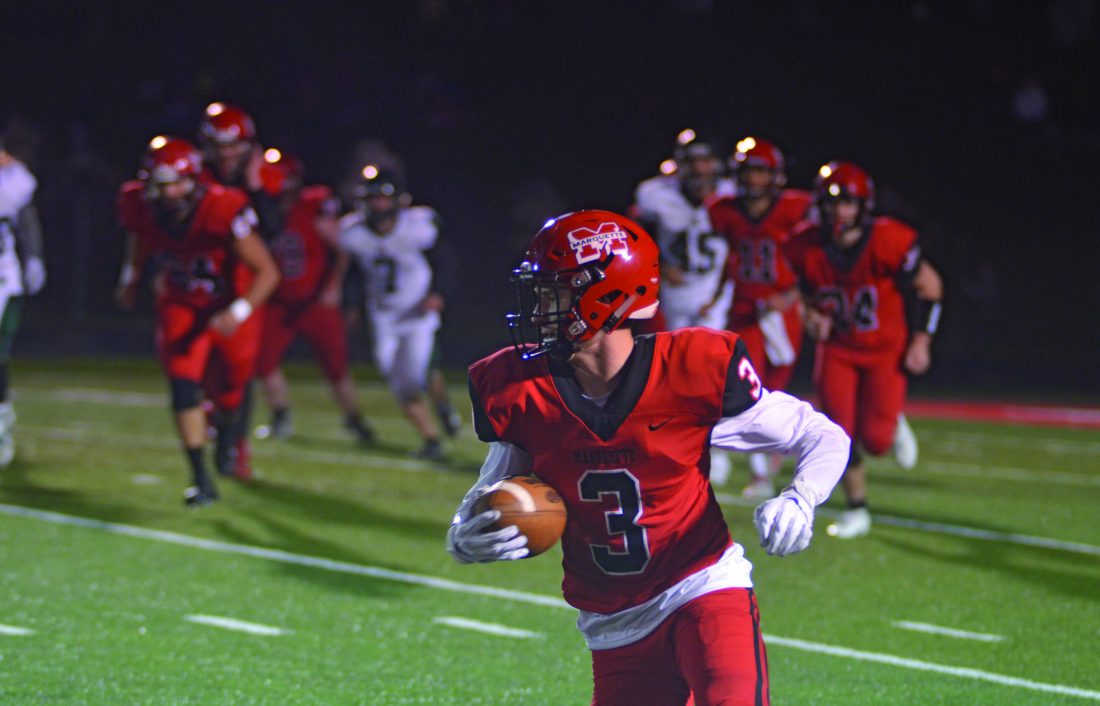 Marquette Redmen Collin Hicks takes the ball down the field during the Redmen's game against Alpena Friday. (Journal photo by Trinity Carey)

MARQUETTE — Heartbreak is something all teams, players and fans will deal with every now and again.

After the Wildcats (3-3) took the lead on an 8-yard touchdown run from senior running back Eli Winter with 2:08 remaining, MSHS (2-4) looked to stage a comeback with its two-minute offense.

The ensuing Marquette drive, which started at its own 20, was led downfield by sophomore quarterback Austin Ridl and receivers Collin Hicks and Justin Jurmu.

After a series of passes to Hicks and Jurmu that steered the Redmen to the Alpena 27, Ridl was sacked for an 8-yard loss on second down to make it 3rd-and-18.

Ridl’s third-down pass was incomplete, leaving one more shot for the Redmen with less than 50 seconds remaining.

Ridl took his shot deep over the middle and had junior receiver Kameron Karp open in the end zone, but the ball was just out of the reach of Karp, who was in disbelief as the Wildcats took over on downs and entered victory formation with 40 seconds remaining.

In the teams’ first meeting since the turn of the century in 2000, a 34-28 Redmen win, the two squads kept things just as entertaining on Friday as they were 19 years ago, a back-and-forth affair that saw MSHS hold a 10-7 lead at halftime.

Marquette head coach Eric Mason said the opposition simply made a play when it mattered, and it’s back to the drawing board next week.

“They made one more play than we did,” he said. “It was a hard-fought game, our kids played hard and sometimes that’s just the way it goes. The other team is trying to win, too.

“We’ve just got to see the resilience of these kids, come back on Monday and get ready to go. As the old saying goes, if you get knocked down, you’re going to get back up. We just need to get back up, get to work and things will happen.”

A potential game-changer came earlier in the fourth after Jurmu’s first and only TD of the night, a 13-yard pass from Ridl with 7:32 remaining.

Instead of kicking the extra point to make it a seven-point contest, Marquette opted for a funky-looking two-point play, with the Redmen offensive line shifted way to the left end of the field.

“It’s just something we decided to do and it didn’t work out,” Mason said. “We’ll live with it and we’ll come back next week and learn from our mistakes as coaches. We owe these kids the best job that we can do, and just like we expect effort out of them, they’ve got to expect the same effort out of us. Those are things we’ve got to correct for next week.”

After the 2-point miss, Marquette elected for a short sky kick in hopes of a mishandle, which was downed in Redmen territory at the 49-yard line.

The Wildcats made MSHS pay, with Winter running for a 34-yard score three plays into the drive. The extra point from senior kicker Hunter Canute was good, making it 20-19 Alpena with 7:06 remaining.

Marquette’s next touchdown was to Brady Wright for a 2-yard TD run on 1st-and-goal, but a more normal-looking conversion attempt failed again, keeping the Wildcats within striking distance with 4:36 remaining.

That’s when Alpena capitalized and took the lead for good on Winter’s second TD run of the game.

Ridl and Wright were bright spots for the Redmen, with Ridl going 21 of 36 through the air for 259 yards and two TD passes, while Wright led the ground game with 20 carries for 131 yards and two TDs.

“Those are two very good players,” Mason said. “Austin continues to do well, it’s a difficult situation and we’re putting him in a lot of pressure situations and he’s responding. What more can you ask of him?

“Brady just comes out here and plays his guts out. He runs the ball hard, he never quits on a play and he’s just a hell of a player.

“With kids like that, we just need to keep working and get to that level.”

Hicks led the Redmen receiving corps with nine receptions for 119 yards. Senior Drew Wyble added five catches for 67 yards while Jurmu had three catches for 26. Wyble also added two field goals, the first from 21 yards out to put Marquette up 3-0 early in the second while the second was a 30-yarder in the third quarter.

Alpena sophomore quarterback Ryan Voltz was 7 of 14 with 100 yards passing, while all four Wildcats TDs came on the ground, with two from Winter and another two from senior back Jordan Schultz.

Schultz led Alpena in rushing with 105 yards on nine carries, while Winter had 92 yards on 16 carries. Senior back Charles Williams also added 81 yards on seven attempts.

Marquette racked up 456 yards of total offense to Alpena’s 371.

The Redmen host Menominee (4-2) on Friday.

“It’s going to be the same stuff we saw (today),” Mason said. “We’ve got to fix up our run defense, our own running game got a little better but we’re still missing assignments. That’s part of the whole deal when you put in a new system and have everybody doing something they’re not used to doing, it takes awhile to learn and we’re showing it.

“We’ve got a lot of growing pains, but the kids will come out and work hard and the coaches will, too. We’ve just got to keep pushing forward.”