Redmen fade in 2nd half in loss to TC Central 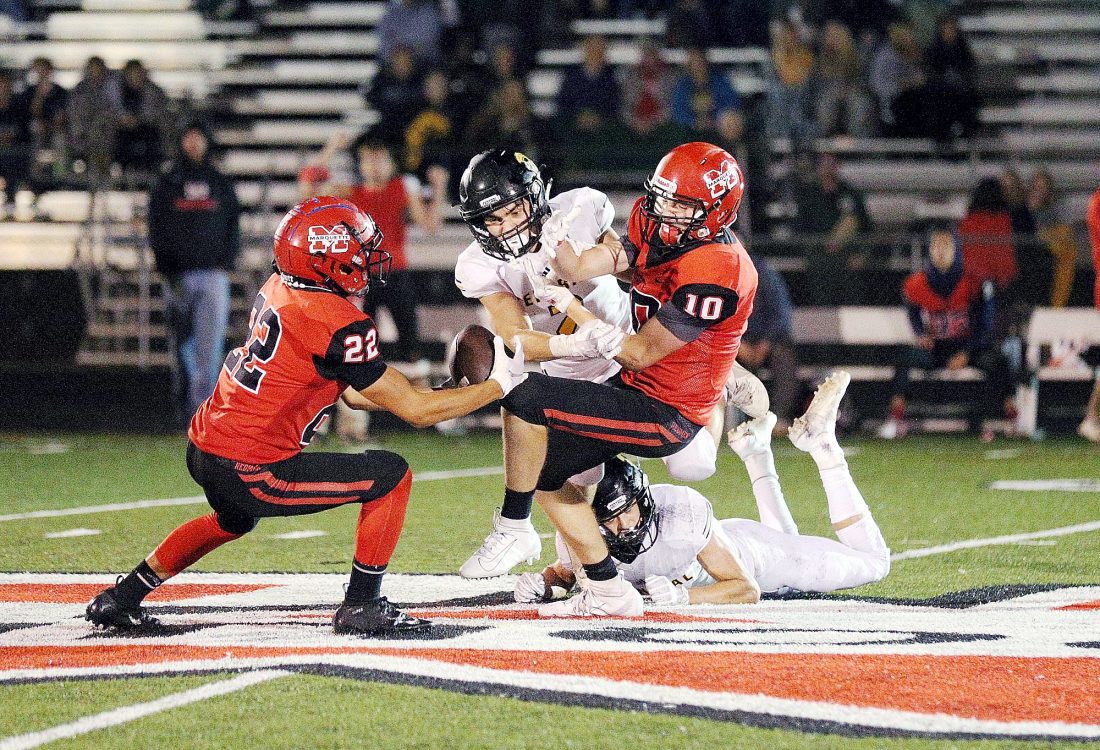 It was a strong first half for the Redmen (0-2), who managed to gain the lead three times before settling for a 20-20 tie at halftime.

Unfortunately for MSHS, the Trojans (1-1) came alive and wore the home team down in the second half, holding the Redmen to just seven points for the rest of the night.

“We got tired,” Marquette head coach Eric Mason said. “They came out, made adjustments, and we just can’t come out like we did (in the second half). But the kids battled hard through the entire game and that’s all I ask of them.”

A particular bright spot for Mason was sophomore quarterback Austin Ridl, leading the offensive attack for MSHS with four touchdown passes, going 15 of 38 through the air for 270 yards and three interceptions.

“He just continues to grow,” he said. “He’s a smart kid, he picks things up quickly, and he battles as you can see. He’s not a very big kid, but he’s tough as nails and you can’t ask anymore out of him.”

“Coming into the game, that was an emphasis,” he said. “They throw the ball well. Their quarterback was very accurate and Marquette has a great team of receivers. They can throw the ball up top and I’m really impressed with (Ridl), he puts the ball in the right spot for them.

“We worried about that and they made us pay early. We can’t give up big plays. You let teams in the game by giving up big plays and I thought we did that early. We didn’t execute on offense early.”

A late score from the Trojans made it a 20-20 game at halftime after senior quarterback Peyton Smith found senior receiver Trey Searles for a 15-yard TD with 6 seconds on the clock.

“I was very happy with the way our offense executed right before halftime,” Schugars said. “For us to score right before the half was huge for our football team.

“I think that kind of set the tone for the second half. It kind of gave us a ‘Woof, here we go,’ because it wasn’t a great first half for us.”

The Trojans defense held Marquette scoreless in the second half until Ridl connected with senior receiver Collin Hicks for a 12-yard TD pass with 1:12 remaining.

TC Central managed 17 points in the second half, the first a 22-yard field goal from senior kicker Alex Parks with 3:55 remaining in the third.

Smith then rushed for a 63-yard TD as time expired in the third frame, putting the Trojans up 30-20 entering the final 12 minutes.

With 2:58 remaining in the fourth, sophomore back Josh Burnham took a 7-yard run to the end zone on a 3rd and goal, all but taking away any chance for a Redmen comeback.

MSHS managed the first points of the night on a 25-yard TD pass from Ridl to sophomore receiver Justin Jurmu with 2:21 remaining in the first. The score was 7-0 after one.

It was a back-and-forth affair in the second, with Central getting all 20 of its first-half points on rushing TDs from juniors Ryan Royston and Austin Bills, plus the Smith to Searles connection with six seconds remaining.

Each team finished with 19 first downs. Marquette finished with 54 yards rushing to complement Ridl’s air attack, with junior running back Brady Wright leading the ground game with 13 yards on 11 carries. Ridl was 15 of 38 through the air.

The Trojans were more successful on the ground, rushing for 348 yards.