IM breaks game open in 3rd quarter to get past Westwood

The Mountaineers (2-0, 2-0) went into halftime ahead 14-0 before Westwood quarterback Taylor Dellangelo sliced through the middle of the field on the second play of the third quarter for a 61-yard touchdown that cut the Mountaineer lead to eight points.

But just two plays into the next Mountaineer possession, Colin Visintainer heaved a perfect pass in stride to Jake Dumais streaking down the sideline for a 76-yard answer.

“We really didn’t want to give up the big play, and we knew he was capable of that,” Mountaineers head coach Robin Marttila said. “(Dellangelo) is a quality football player. But Jake Dumais made a great play catching that 76-yard touchdown, and it sort of switched the momentum back to us.

“We got a couple of more big pass plays and were able to make it three- to four-score game there after that.”

With Iron Mountain’s defense doing its part to keep Westwood on its half of the field the rest of the third quarter, the Mountaineer offense wasted no time piling up the points.

Caleb Evosevich-Hynes slipped behind the Westwood defense and Visintainer pegged him for a 48-yard score that pushed the score to 28-6 midway through the frame on a two-play drive.

Later Visintainer hit Evosevich-Hynes for 33 yards on a screen pass to the 13-yard line. Evosevich-Hynes went in the end zone on the next play, taking a pitch back from Visintainer and rumbling in to cap a four-play drive and make it 35-6 near the end of the quarter.

Westwood punted on the first play of the fourth quarter, and on the Mountaineers next play from scrimmage, Caleb Burklund busted loose for a 61-yard TD. Evosevich-Hynes’ kick made it 42-6 for the Mountaineers’ largest lead of the game, which brought in most of Iron Mountain’s second string for the remainder of the contest.

The game was scoreless in the first quarter, Iron Mountain breaking through on its third possession when Visintainer darted to the left side, made one would-be tackler miss and zipped into the endzone for a 25-yard score.

“I think we were kind of feeling each other out there early on, seeing what we could do,” Marttila said. “We were able to get the job done. It’s a great win and we’re happy to get to 2-0 and 2-0 in the conference.”

Burklund paced Iron Mountain’s rush with 102 yards on five carries. Visintainer was 4-of-9 passing for 152 yards.

“We’ve talked about how we have more than few playmakers on this team, and Burklund made a couple of nice runs tonight,” Marttila said.

Pietrantonio led the defense with nine tackles. Jon Carrion added seven stops, a sack and he forced a fumble when he drilled tailback Erik Anderson in the backfield to end Westwood’s first possession of the game. Pietrantonio scooped up that loose ball. Evosevich-Hynes also had seven tackles, and he was a perfect 6 for 6 kicking PATs.

The Patriots final two scores included a nice 53-yard rush by Chad Pohlman and a late 14-yard run by Stephen Kangas to cap 13-play drive that gobbled up most of the final eight minutes.

“We made assignment mistakes tonight and then we compounded with mental mistakes,” said Westwood head coach Scott Syrjala, whose team collected seven penalties for 75 yards. “The penalties, it was unbelievable. I’ll be honest.

“I question it because it was 13 to 1 going into the half. That’s kind of ridiculous, but you know what? That’s part of the game. It’s frustrating, but we have to learn from it.”

Dellangelo carried 25 times for 150 yards for the Patriots. Pohlman wound up with 106 yards on eight trips.

“I’m not going to fault our kids tonight,” Syrjala said. “We hung our heads a bit in that third quarter, but we have a really good group of kids and I thought they battled.

“Iron Mountain is a good team, and they answer the bell. I’m really proud of my kids tonight.” 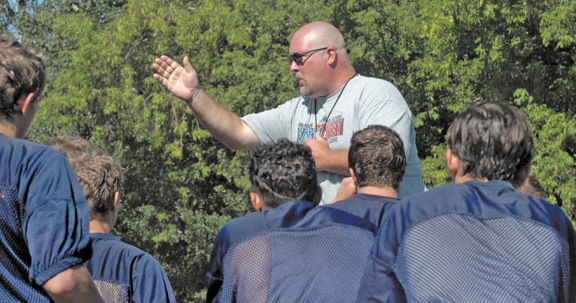