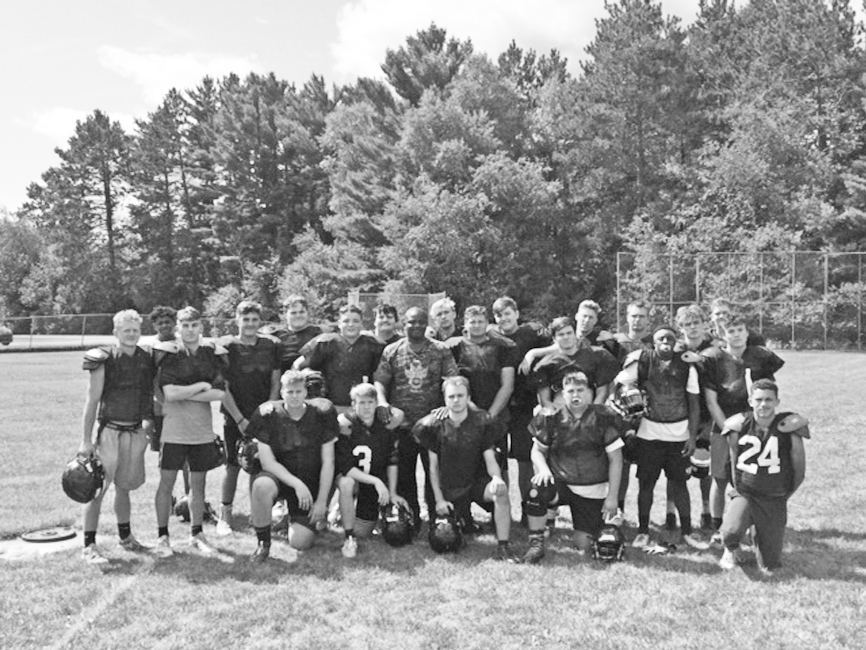 GWINN — Over the last few years, the Gwinn High School football program’s fortunes have turned all the way around.

After missing the MHSAA playoffs for almost two full decades, the Modeltowners have now made the postseason two of the last four seasons, including last year.

Head coach Dion Brown likes the progress his team has made, but wants it to continue.

“Last year, we had another successful season, coming from a program that was down and out four or five years ago,” he said. “We want to continue to build off that.

“That’s the biggest thing for me. To continue to build and build, especially with the young group of kids that we’ve got. I started, like, six sophomores last year. I just want to continue to build with those guys, so that every single year we’re a playoff team.

“And then we just have to grind it out and get playoff wins and try to win the conference. This kind of success, in a hard West PAC conference where we played some very good football teams, we were able to stand out and make the playoffs and that’s what every coach wants to do.

“Don’t let them fool you … they all want to make the playoffs.”

With the roster Brown has coming back, making the playoffs is definitely a possibility. Caleb Anderson returns at quarterback after getting injured midway through last season and getting replaced by tailback Austin Forbes (who ended up playing on an injured knee the rest of the way).

Brown feels especially positive about Anderson’s abilities as a signal caller and just hopes he can avoid the injured list.

“Caleb (Anderson) is back from last year,” Brown said. “He broke his wrist the week before we played Houghton, but he’s back. He’s bigger, faster, stronger and looks really good. He brings everything to the table.

“I love Austin to death, but Anderson is the best quarterback I’ve coached at Gwinn because he’s able to run everything. He runs those RPOs (run-pass option) and he’s a true leader.

“He’s that one kid that when he talks, everybody listens. He brings leadership and he brings just overall toughness to the team. So I’m happy that he’s back, and hopefully, he can stay healthy this year.”

If Anderson stays healthy, he’s got a variety of weapons to deliver the ball to, including himself. Brown is blessed to have several talented skill players, so the Modeltowners could be putting up lots of points, starting with running back Blaine Bridges.

“We’ve got a lot of skill guys. It’s going to be a rotation of backs and wide receivers. The No. 1 receiver will be David DuVall. He’s pretty good and he’s a great route runner. He’s fast and quick off the ball. He’s the No. 1 this year.”

For those skill players to be effective, though, Gwinn’s offensive line will need to be at their best. Brown likes what he sees from that group.

“The line is pretty good,” the coach said. “I return four offensive linemen with Reid Hill, Tristan Jancsi, Cameron Ghiringhelli and Kaden Watt. We’re looking pretty good up front. Our biggest thing is getting our calls and signals and combination blocks and all the little things right.”

If the Modeltowners have a weakness, it’s probably on the defensive line, as there’s not a lot of experience there.

“They’ll be the same guys on the line (as the offensive line), but the crazy thing is that’s where we’re inexperienced,” Brown said. “That’s going to be huge for us. We replaced (Eddie) Chapman and Chris (Sirois) and (Roy) Hamilton and (Mason) Bockert. We replaced five defensive linemen. That’s the tricky one. I’m very interested to work with my defensive line and I told my D-line coach that he’s got to get paid this year. He’s got to get his money’s worth.”

The linebackers and the secondary, on the other hand, are a little more stable than the line and just like at the skill spots, Brown is going to have a lot of rotating.

“I’ve got a deep outside linebacker corps, so we’ll be doing a little rotation with Caleb Styler. So those guys are going to be in the rotation. We’re just trying to keep everybody fresh and we’ve got some depth there.

“We got a good secondary coming back, too. I think I’m gonna throw some things in there, some rotations, because I trust all these guys.

“They’re phenomenal athletes, sophomores and juniors and I think maybe one senior. I love the roster. With the overall talent, it’s probably the best roster I’ve had since I’ve been in Gwinn.”

Unlike a majority of Upper Peninsula teams, Brown has the luxury of having a kicker this year in DuVall, so the Modeltowners might be kicking some extra points instead of always going for two following touchdowns.

Looking at the schedule, Gwinn has a bit of a luxury there, too, as it’ll get five home games this year unlike last season. That’s a positive, but Brown expects the entire slate to be tough.

“I was just talking about that with our coaches,” he said. “Lake Linden(-Hubbell) played us hard. That first game of the season, I know Bark River(-Harris) had a losing record, but they played us tough till the fourth quarter. We went back and forth with Norway. West Iron County came down to pretty much the last play of the game.

“It’s very tough. Like I told our guys this year, you’ve got to go out there and you never know. It might come down to a Hail Mary or what team is better prepared and things like that. We were able to do that (last year) and hopefully, we can do that again this year.”

Brown feels good after the first few days of practice and thinks that he’s got the type of team that can take that next step. Not just make the playoffs, but get a victory as well.

“It’s the best (team) we’ve had because we’ve got depth, we’ve got big linemen, which I love, and we’ve got a really good quarterback,” he said. “We’ve also got overall team speed and a lot of athletes, so at the skill positions, we’re very skilled.

“At the line, I think I still need one (more) D-lineman to go through the D-line rotation. I like those guys. I’ve got them there.

“We’re solid across the board. I can’t wait to see going into that first game. I’m really interested to see what we can do and it should be fun.”