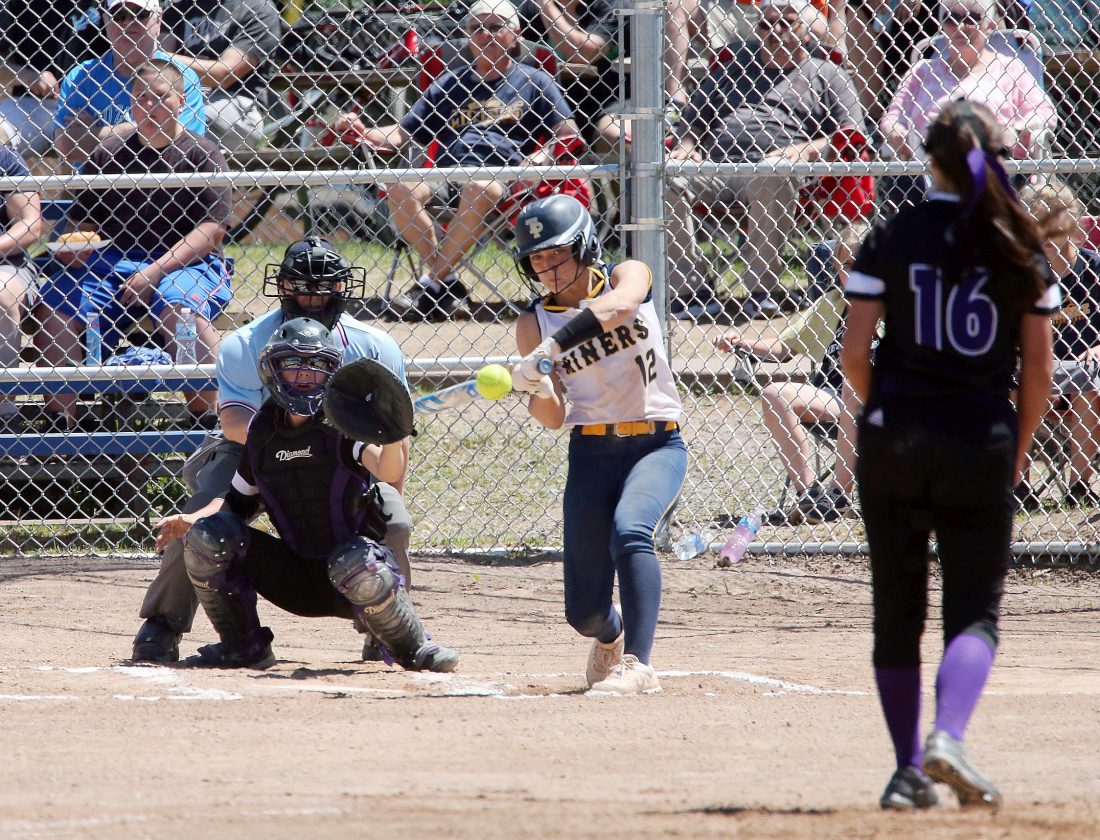 NEGAUNEE — It took a while for the Negaunee softball team to find its groove Saturday afternoon, but once it did, the Miners wouldn’t let up.

After pounding Kingsley 14-1 in their MHSAA Division 3 regional semifinal match a game earlier, the Miners faced a Gladstone team that put up 13 runs on Boyne City in the day’s first semifinal game.

On paper, it looked like this game was going to be a tight one and could go a full seven innings. Instead, Negaunee scored five runs in the second inning and kept rolling from there as the Miners won 15-0 in four innings for its second straight regional title.

“We started out a bit slow, but with this group, you never know when they’re going to explode,” NHS head coach Randy Carlson said. “I tell you what, once they got going, it was like a steam engine coming down the track. There was no stopping them.

“Hitting is contagious and sometimes, when you’re not hitting, it’s contagious. Once you get that confidence, where you see someone go up there and get a rip, then the next person is like ‘I can do it’ and it just keeps rolling.”

For the Braves, they seemed to be in shock. Gladstone dominated Boyne City from start to finish, but struggled at the plate against Negaunee pitcher Skylar Hall, who tossed the shutout.

“I think we dug ourselves into a hole,” Gladstone head coach John Nevala said. “We were down 5-0 after the second and then it was 7-0. We just couldn’t get anything going. We hit the ball really well the first game and we hit some hard shots, but I give them credit. They made the plays when they needed to.

“We had an excellent season. We won 30 games and that’s a good season, 30-6. And we lost to some really good teams, Escanaba four times, so some good teams.

“I’m really shocked by the score, so I really give them credit. I never dreamed that we’d get 15-run ruled. I thought it’d be a close, close game. They hit the ball really well and played defense and pitched well.”

When asked about her impressive day, Hall was modest and was just pleased with how her team performed in both games.

“I’m really happy,” she said. “I hope we go far this year, like farther than last year and I think we will. Our defense has gotten better and our batting and stuff. I’m super happy and proud of everyone.”

In the championship game, Negaunee started to drive the ball off Gladstone pitcher Andie Balenger. The Miners scored five runs in the top of the second, starting with an RBI single by Mykenna Kontio. After Morgan Carlson hit a triple, she came around to score on a base hit by Josie Thompson. The Miners plated two more runs on a Gladstone error and then got one more on an RBI single by Abby Nelson.

The Miners remained hot at the plate in the third. Payton Drew scored on a Braves error and Kenzie Karki reached home on a double steal as Negaunee took a 7-0 advantage. With Hall continuing to shut down the Braves, the Miners put the game away in the top of the fourth with eight final runs.

Drew knocked in two runs with a double to the centerfield wall, and after Negaunee scored a run on a passed ball, Carlson drove in another with a double of her own. With Morgan Letteriello now pitching for the Braves, Kaleigh Duncan plated two more on a base hit and Nelson completed the scoring with a two-run single.

“Our whole team impressed me,” Coach Carlson said. “Last year was the first time we’d beaten Gladstone and never in my wildest dreams would I have said we could beat them 15-0. We were looking at this being a 2-1 or a 3-2 game. Just unbelievable. This is a special group and I love them. I’m so happy and I’m glad that we get to spend more time together.”

Earlier in the day, things went much better for the Braves as they scored four runs in the top of the first against Boyne City. After the Ramblers got one run back on a bases-loaded walk, Gladstone got its bats going again in the second. The Braves used their speed on the basepaths to get two runs on the scoreboard and then Letteriello knocked in another with an RBI single.

With Gladstone leading 7-1 in the fifth, Taelor Zeise smashed a two-run homer and the Braves piled on from there. Balenger then shut down the Ramblers in the fifth to complete the 13-1 win.

In the second semifinal, it took until the third inning for Negaunee to get on the board as it picked up two runs on back-to-back wild pitches, but the Miners didn’t get their first hit until the fourth.

After Kingsley cut its deficit to 2-1 in bottom of the fourth, Negaunee’s bats started to connect off Stags starter Karly Roelofs in the fifth. Hannah Voskuhl started things off with a double and she came around to score on a throwing error. Payton Drew then followed that with an RBI single and the Miners took a 4-1 advantage into the top of the seventh, when they broke the game open with 10 runs.

Nelson smashed a long hit to the wall and it turned it into an inside-the-park, two-run homer, while Josie Thompson and Drew also drove in two runs each with base hits to wrap up the game. Nelson earned the win in the circle for the Miners with Hall pitching three innings in relief.

“The great thing was that Abby started that first game and did exactly what we wanted,” Coach Carlson said. “We got four innings out of her and she stepped up and did great. Then Sky, basically in that first game, got a few innings to warm up and then got in a groove. She’s been awesome all year.”

The Miners play Standish-Sterling Central at 5 p.m. Tuesday in Gaylord in the Division 3 quarterfinals. The Panthers of Arenac County, located between West Branch and Bay City, defeated McBain 9-7 and then Clare 6-1 in their Saturday regional.

From there is a date at Michigan State University for the semifinals and finals, beginning with a game on Friday at a time to be determined.