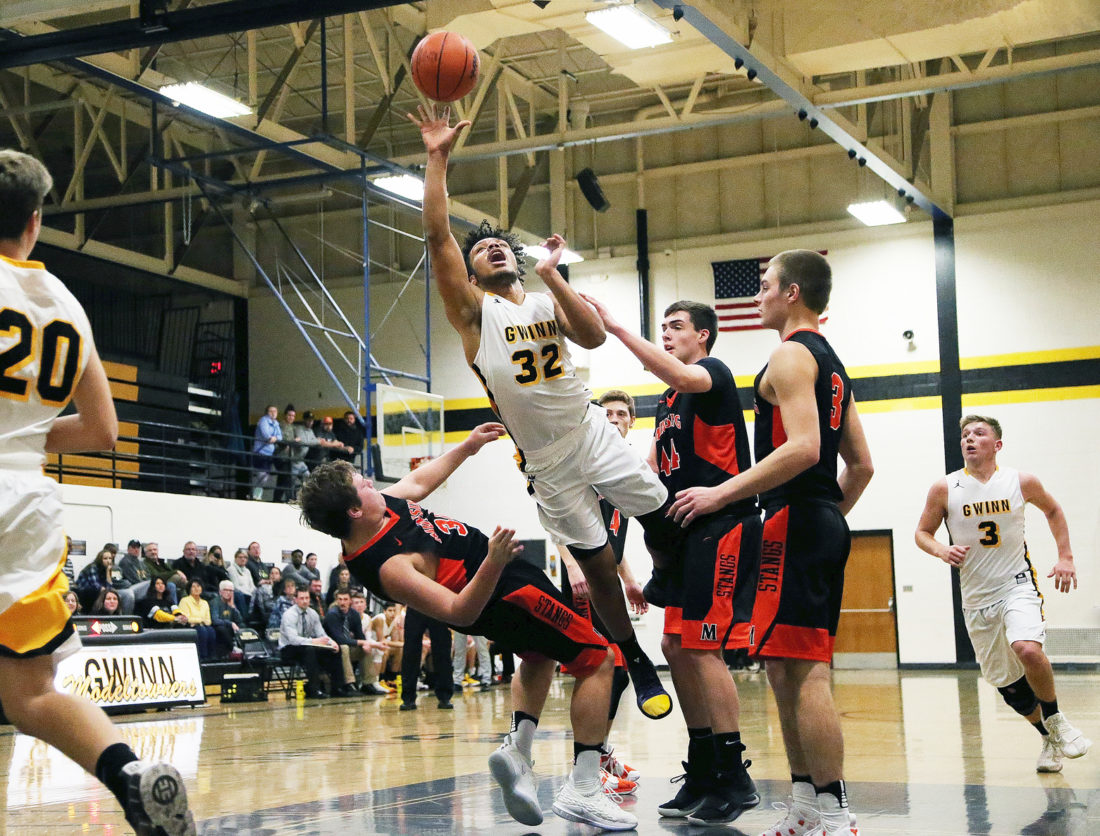 The Modeltowners, with the help of four double-digit scorers including Harnick, earned their first win of the season 67-58 over visiting Munising.

Both teams are now 1-1 on the season after Tuesday night’s contest.

Gwinn head coach Jim Finkbeiner said he was happy with the way his team responded after a 63-38 loss to West Iron County in its season-opener last Friday.

“We didn’t play very tough or respond well in the first game,” he said. “Between now and then, the kids are still getting in here and getting after it and I applaud them for that fact. (Tonight) wasn’t perfect, but it was a heck of a lot better than what we had on Friday.”

Finkbeiner also credited Harnick for getting those triples when needed.

“The one nice thing about (tonight) is that we had different guys at different times in the game step up and score when we needed it,” he said. “James hit those three 3’s in a row after going about a minute and a half without scoring. From that we go from up three of four points to up double-digits and it gave us that breathing room again.

“Same with (sophomore center) Reid Hill. We go about two minutes without scoring and he gets a couple of quick buckets on the inside all of a sudden. It’s a different guy each time and that’s what we needed, to play that team ball.”

“Eight for 26 at the free throw line was probably the No. 1 killer,” he said. “They (Gwinn) played hard defensively, we scratched our way back, tied it up and then they started knocking down some big shots while ours weren’t falling.

“Give it to Gwinn. They knocked down shots when they had to. I thought our effort was great but unfortunately our shooting percentage from the free throw line really hurt. Even our offense in the first half, we weren’t playing team basketball or moving the ball, and that slow start just hurt us.”

After falling into an early 6-2 hole, the Modeltowners climbed back and took its first lead of the night on a layup from senior center Jacob Smith which came off of a strong pass from senior forward Tucker Taylor to put Gwinn up 7-6. Gwinn held onto that lead for the rest of the quarter and was up 16-12 after eight minutes.

Up 25-22 later in the second, that’s when Harnick came to life, sinking two straight triples from the same spot on the floor to make it 31-22.

A Modeltowners foul on Smith followed, allowing Munising junior Jason Cornish to make one of his two free throw attempts.

After the charity bucket, Harnick hit another 3-ball at the other end of the floor to put his team up 34-23. The Modeltowners held a 34-27 lead at the break.

Harnick said he was happy to give his team some momentum before halftime.

“It just felt really good because I hadn’t hit one yet,” he said. “So to hit three in a row was nice.”

The Mustangs kept things close however, and eventually tied things up at 36-36 in the third on a layup from junior Austin Killips.

After a pair of Gwinn free throws and only one made, Munising took its first lead since the first quarter 38-37 on a layup from senior Anthony Mattson.

More 3-pointers followed for the Modeltowners however. A right corner triple from senior guard Austin Forbes put Gwinn back up 40-38 before a 2-point jumper at the other end from senior Jesse Matson tied things up again at 40.

Right after that, Harnick drained another three followed by one from Forbes as well to put the Modeltowners up 46-40.

Forbes added one more bucket before the end of the quarter to put Gwinn up 48-40 after three.

The Mustangs pulled within three points in the fourth, but were never able to re-gain control of the lead.

Forbes led Gwinn scorers with 18 points while Taylor had 14 and Harnick and Hill 12. The Modeltowners shot 22 of 44 from the field and collected 29 rebounds with Taylor getting 14.

Munising was led by Mattson with 22 points while Matson added 18. Shooting and rebounding stats weren’t available.

Munising travels to Stephenson on Thursday while Gwinn travels to Ishpeming next Wednesday.