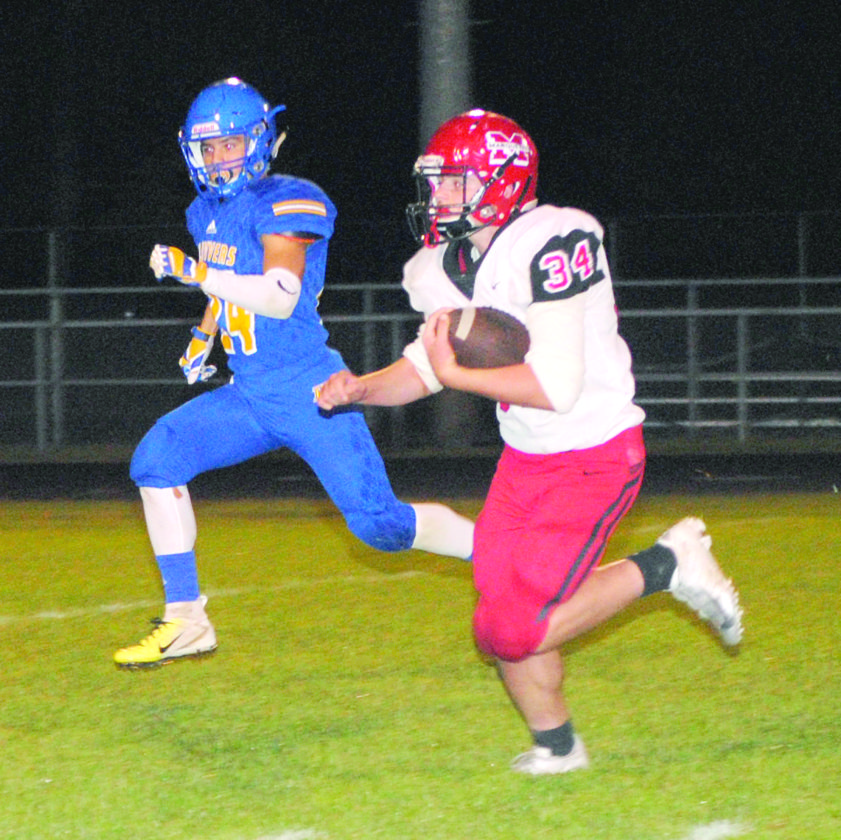 KINGSFORD — Marquette stuffed in a two-point conversion during the final seconds of the first half and held on to edge Kingsford 21-20 in Great Northern Conference football Friday at Flivver Field.

Kingsford then played for the win, calling consecutive timeouts prior to the 2-point conversion attempt. Terrian rolled right on a run-pass option and came up a foot short.

“That was a huge play by these young men, something they will remember for a long, long time,” said Marquette head coach David L’Huillier. “That’s the difference in wins and losses sometimes. Today, it comes down to one foot. Just great play by our young men.”

“I just thought we could get it and they wanted it, too,” Hofer said. “We had the momentum at the time.”

L’Huillier, who pulled off a 2-point conversion in overtime to beat Escanaba two weeks ago, wasn’t surprised by the Flivvers’ bold move.

“They had the momentum,” L’Huillier said. “They were driving in the second half and had just ran in from 5 yards away to score.”

The first half of the homecoming game certainly didn’t look like it was coming down to a single point. Marquette moved to a 21-7 advantage behind two touchdown runs of 2 and 36 yards by Brady Wright and a 67-yard pitch from quarterback Brendan Kaski to wide receiver Ethan Martysz.

Terrian raced 69 yards for a second-quarter touchdown. The senior quarterback added a pair of five-yard scoring runs in the second half.

“The second half is how the first half should have been,” Hofer said. “It started that way and then just poor execution with so many things.”

Kingsford held Marquette to 63 yards total offense in the second half. Martysz was held to one catch for two yards before leaving with a shoulder injury midway through the fourth quarter. Wright’s second-half rushing was three carries for 16 yards.

L’Huillier cited Kingsford adjustments and mistakes by his club in the second half.

“They changed their coverage a little bit defensively,” L’Huillier said. “They did a few things differently. They tried to slow Ethan Martysz down a little bit. We made a few miscues that we didn’t take care of.”

Marquette tallied three turnovers with Wright and Austin Tabbert intercepting passes and Ethan Hayes recovering one of the several high snaps by the Flivvers.

Kingsford had one last gasp with an onside kick, but Marquette’s Robert Bell recovered it.

“I’m just so impressed with our kids and how they dug deep,” L’Huillier said. “We didn’t do the things we needed to do offensively in the second half but our defense showed up big time at the end in stopping the two-point conversion.”

Both teams play non-league games with Wisconsin foes next Friday with the Flivvers hosting Lomira and the Redmen meeting Lakeland of Minocqua.

Marquette is the only unbeaten team in the Great Northern Conference and hasn’t won the GNC since 2011.