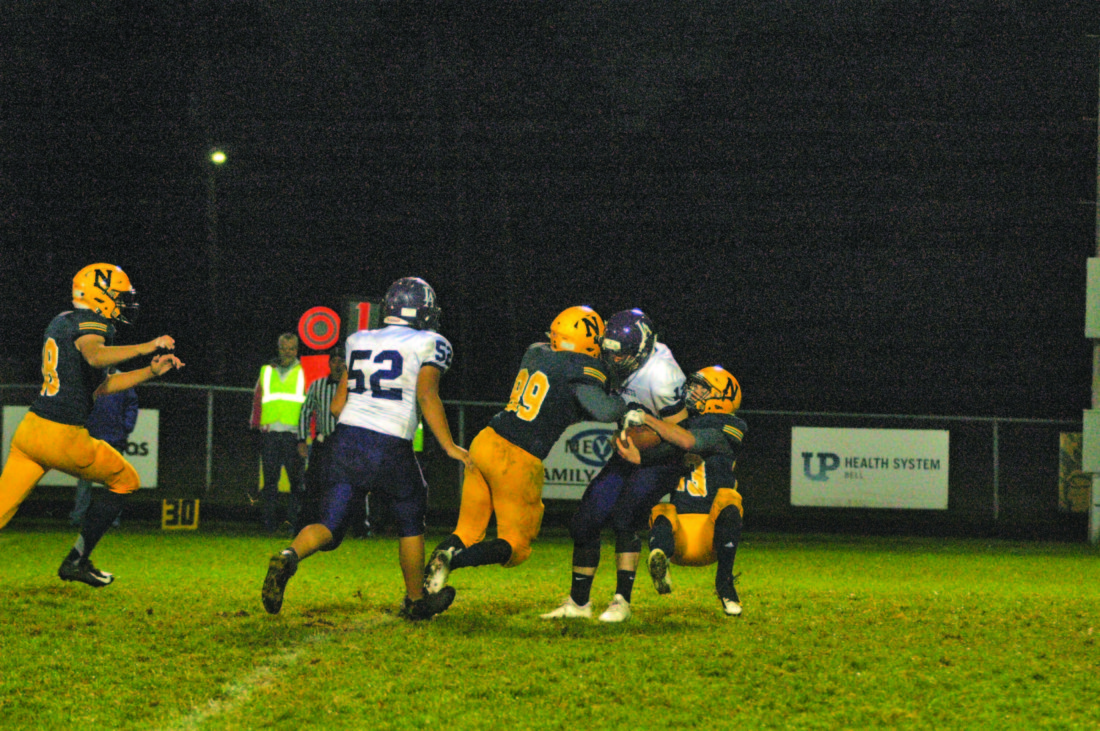 NEGAUNEE — Early mistakes from the Purple Hornets, combined with a strong offensive performance from junior quarterback Jason Waterman and the Miners offense, propelled Negaunee to a 40-6 high school football victory over L’Anse at Miners Stadium on Friday night.

Both teams are now 3-3 as the Miners kept their playoff hopes alive with a Homecoming win on a chilly night with temperatures in the 30s.

“I thought we played well and executed on both sides of the ball,” he said. “We came out with a nice victory.”

Jacobson credited his defense as well as two main players from the Miners’ offensive line that helped the run game be productive.

“We were able to get some turnovers. That’s the No. 1 goal for our defense is to get the ball back,” Jacobson said. “As for the offense, we played well up front. Collin Remilong really came to the forefront tonight as a leader and a blocker, Brayden Velmer was another guy who had a great night.

“Our backs ran well, too. We ran well, ran our blocks and (running back) Peyton Anderson had a good night. We executed for a good team win.

“We’ve got to keep getting better. We have to look at ourselves and say ‘We’re not done yet,’ we’ve got a lot of football left this season and we have to continue to get better and work on the little things.”

Waterman said he was happy to contribute to the victory and knows every game is important from here on out.

“We just want to make the playoffs and right now we’re scrambling for our lives,” he said. “We’ll take any win we can get at this point.

“At times we moved the ball, especially in the first half I thought we moved the ball well,” he said. “We just killed ourselves with mistakes. We shot ourselves over and over. Mistakes, turnovers, untimely penalties and it’s just disappointing in that fact.

“Negaunee played well, they’re a very good football team and they’re better than their record indicates. They’re a good football team but we didn’t help ourselves at all with the mistakes we made, which is disappointing at this point in the season. Some of that stuff needs to be cleaned up.”

Leaf added one bright spot for his team was its running game, led by the senior duo of Devan Funke and Alec Rajala.

“I thought we ran the ball pretty good, especially in the first half,” Leaf said. “Devan ran hard and he had a nice game, Alec also ran the ball well. Like I said, we just hurt ourselves more than anything.”

Negaunee opened with the ball, and faced fourth down four plays in. That’s when Waterman pitched the ball to wide receiver Eric Etelamaki, who fumbled the toss and was recovered by the Hornets.

The Miners defense did its job, forcing L’Anse to punt. Negaunee wide receiver Drew DuShane took the Purple Hornets punt for a huge return back to the L’Anse 31-yard line.

On the ensuing play, Waterman ran the option left for a 31-yard touchdown. The extra point by Erik Salminen put the Miners up 7-0.

On its next possession, Purple Hornets senior QB Reese Waara handed off to junior Tanner Lane, who fumbled the ball and was recovered by the Miners’ Johnathon Hill.

Now set up at the L’Anse 24, Negaunee eventually found the end zone again on a 3-yard rush from Etelamaki, putting the Miners up 14-0 after one quarter.

The Hornets got on the board on the first play of the second quarter when Waara handed off to Funke for a 12-yard TD run. The extra point was blocked, however, making it an eight-point game, 14-6.

L’Anse fumbled the ball on a later kickoff, which was recovered by the Miners again. Waterman then got his third TD rushing, this time for 1 yard out. The extra point was no good for a 27-6 halftime score.

The Miners’ defense remained strong in the second half while the offense added two more touchdowns.

Waara went 5 of 6 passing with 57 yards for L’Anse while Funke led the way on the ground for 114 yards.