Hematites pull out wild and woolly win over Patriots 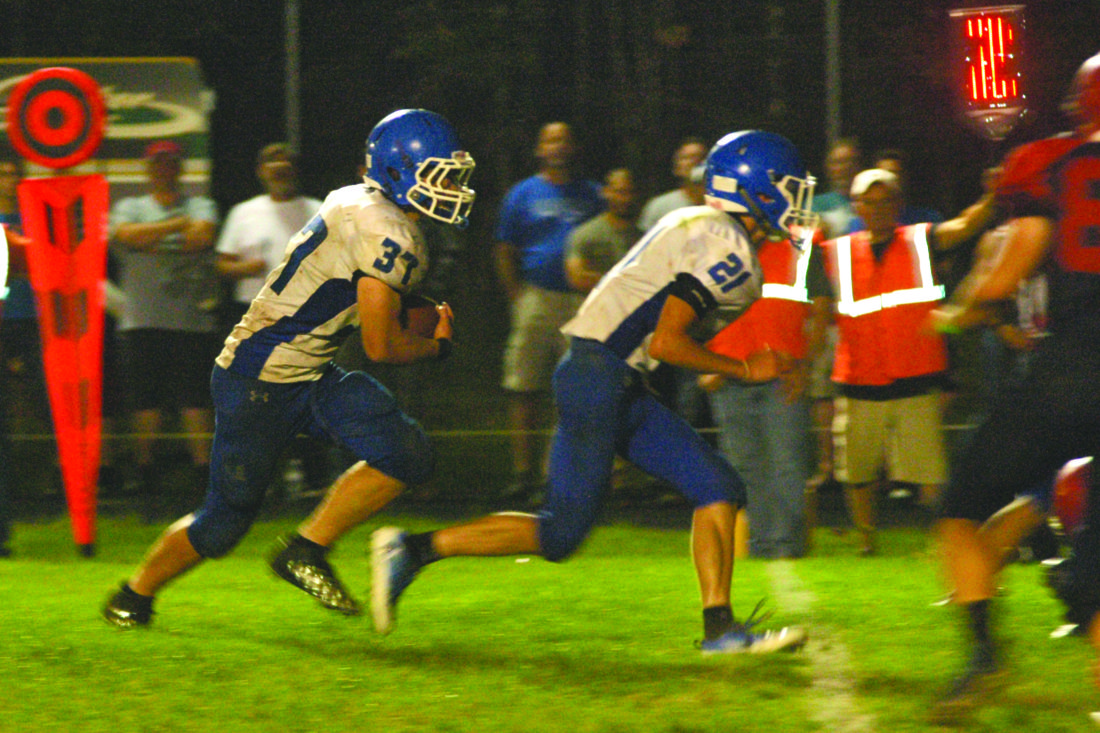 From right to left, Ishpeming Hematites Drake Sundberg and Gavin Sundberg rush the field during their their game against Westwood at Westwood High School on Friday, Sept. 14, 2018. (Journal photo by Trinity Carey)

MARQUETTE — Despite a slow start out of the gates and finding themselves down two scores early, the Ishpeming High School football team didn’t give in.

Instead, the Hematites found their legs and topped Westwood High School 44-36 in a battle of next-door rivals at Westwood on Friday night.

Ishpeming is now 4-0 on the season, while the Patriots fell to 2-2 after this nonconference, cross-division game in the West PAC.

Ishpeming head coach Jeff Olson credited his players for not throwing in the towel early after a shaky start.

“That’s a great football team we played but I’ll tell you what, the resiliency our kids showed throughout the whole game — we’re down 14-0, making every mistake in the book — it would be very easy to put your head down and that’s what a lot of people do these days,” he said.

Olson also credited his defense for coming up big in key moments.

“We stopped them just when we needed to,” he said. “We bent a lot and that’s because they run the ball well and have a great offensive football team.

“We bent but we didn’t break. We gave up some big plays, but now we can learn from that, watch some film and get better that way.”

“We can’t hang our heads and I thought our kids battled hard,” he said. “It was a good game but we still lost. That’s kind of how I look at it, that’s how our kids look at it. They wanted a win (tonight) and we made some pretty big mistakes in the second quarter.

“We have two weeks in a row now where we’ve made some pretty big mistakes and it cost us the game. At some point we’ve got to start learning our lesson. I hope this is it, I hope this is the game and we can start a new week Monday and go from there.”

Ishpeming started the game by kicking off out of bounds, setting up Westwood at its own 37-yard line.

On the first play from scrimmage, Westwood junior Taylor Dellangelo, primarily a wide receiver, took a direct snap and dropped back for a pass, finding fellow junior receiver Erik Anderson wide open downfield for a 63-yard touchdown 10 seconds into the game.

On Ishpeming’s first possession, the Hematites had just one play before turning the ball over on a fumble.

Westwood capitalized on the turnover and Anderson eventually found the end zone with a 1-yard rush on 2nd-and-goal and a 14-0 lead.

The ensuing squib-kick kickoff bounced off a Hematites player and the Patriots recovered the ball at midfield.

The Ishpeming defense held Westwood to a three-and-out this time. IHS senior Hunter Smith found some open space and returned the Westwood punt for an 85-yard TD to put the Hematites on the board.

After another defensive stop, Sundburg found the end zone on a fake handoff and kept it himself for a 59-yard score for a 14-14 tie.

A 13-play possession by the Patriots after that ended with an interception. On 4th-and-3 from the Ishpeming 33, Patriots’ senior running back Ashton Bergman took a direct snap and threw a pass that was picked off by Hematites’ senior Zack Jandreau and returned 67 yards for a 22-14 lead just a few seconds before halftime.

Ishpeming found the scoreboard again with a 5-yard run from senior running back Drake Sundberg, making it 30-14 Hematites.

Westwood answered as senior quarterback Nathan Beckman took a QB keeper 77 yards for a score to pull the Pats within 30-22.

The teams traded touchdowns again in the fourth making the game 36-30 with 5:45 left.

At that point, Ishpeming drove nine plays and ran the clock down to a minute before Gavin Sundburg took a QB sneak from the 1 to all but end the game.

Ishpeming finished with 300 yards rushing as the Sundburgs led the way, Gavin gaining 147 and Drake 142.

On Friday, Ishpeming hosts Negaunee (2-2) while Westwood is scheduled to play at Manistique (0-4).