Back to the playoffs 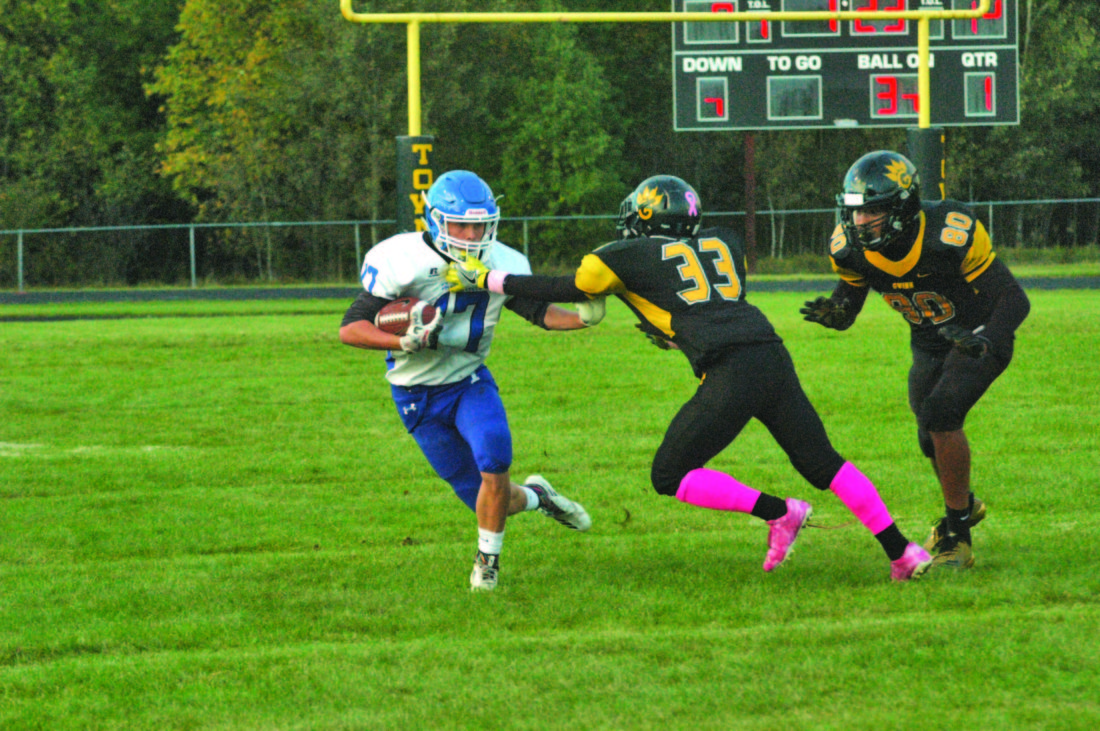 Quote lift: “It’s nice to get it done this early and focus on some other things.” — JEFF OLSON, Ishpeming head coach, on clinching an MHSAA playoff spot

GWINN — The last time the Ishpeming High School football team made the MHSAA playoffs, they brought a state championship back to the Upper Peninsula.

On Friday night, the Hematites took their first step toward reaching that ultimate goal as they clinched their first postseason bid since 2015 with a 44-8 victory at Gwinn.

Ishpeming (6-0) took advantage of four first-quarter interceptions, three of them coming from defensive back Hunter Smith, to build a commanding 28-0 lead and then cruised from there.

“It was a great team effort,” Olson said. “It starts with the offensive line controlling the line of scrimmage, which opened up some holes for our guys again. We were able to run the ball the way we wanted to.

“We (also) wanted to throw the ball because people don’t realize that Gavin (Sundberg) is a great all-around quarterback and can throw. We haven’t thrown much this year, but we want to have that in our arsenal and we had some big throws by him and some big catches, so that was good.

“We were able to establish the pass and then defensively, we had four picks in the first quarter. So it was a total team effort, offensively and defensively. That was good to see.”

For the Modeltowners (4-2), it was another tough night after falling to Houghton last week. Gwinn has already been bitten hard by the injury bug and quarterback Austin Forbes was limping around through the whole game.

Modeltowners head coach Dion Brown credited Forbes to trying to fight through the pain, but also didn’t want to use injuries as an excuse for the loss.

“So once you get down 21, 28 points, that throws away the whole game plan. Then we’ve got guys banged up, but those aren’t excuses.

“Guys just didn’t come out ready to play for the past two weeks. So I’ve got to find that spark or something to get us back on track. So we’ll be fine. It’s one game.”

After picking off Forbes on Gwinn’s first possession, Ishpeming got its first touchdown on a short run by Gavin Sundberg. Sundberg also picked up the 2-point conversion to put Ishpeming up 8-0. The Hematites got another interception on the Modeltowners next possession and two plays later, Sundberg found the end zone again with a 39-yard run to give his team a 16-0 advantage.

Ishpeming padded its lead with 6:41 left in the quarter with a 38-yard touchdown from Matt Trawick and after another interception, the Hematites got rolling again. After Ishpeming got up to the Gwinn goal line thanks to a long fourth-down conversion, Zack Jandreau plowed into the end zone to give the Hematites a 28-0 lead.

The Hematites got their next touchdown on a 34-yard pass from Sundberg to Chase Jensen and then capped off their scoring with a 15-yard run from Trawick. Ishpeming also got both of the 2-point conversions.

Gwinn got its lone touchdown with 2:14 remaining on a 36-yard run by ToQuan Starnes. He also ran in the 2-point conversion.

The Modeltowners will try to get back on track when they head to Norway Friday, while Ishpeming plays at West Iron County next Saturday.