Kent expected to take over as Wildcats’ main goaltender 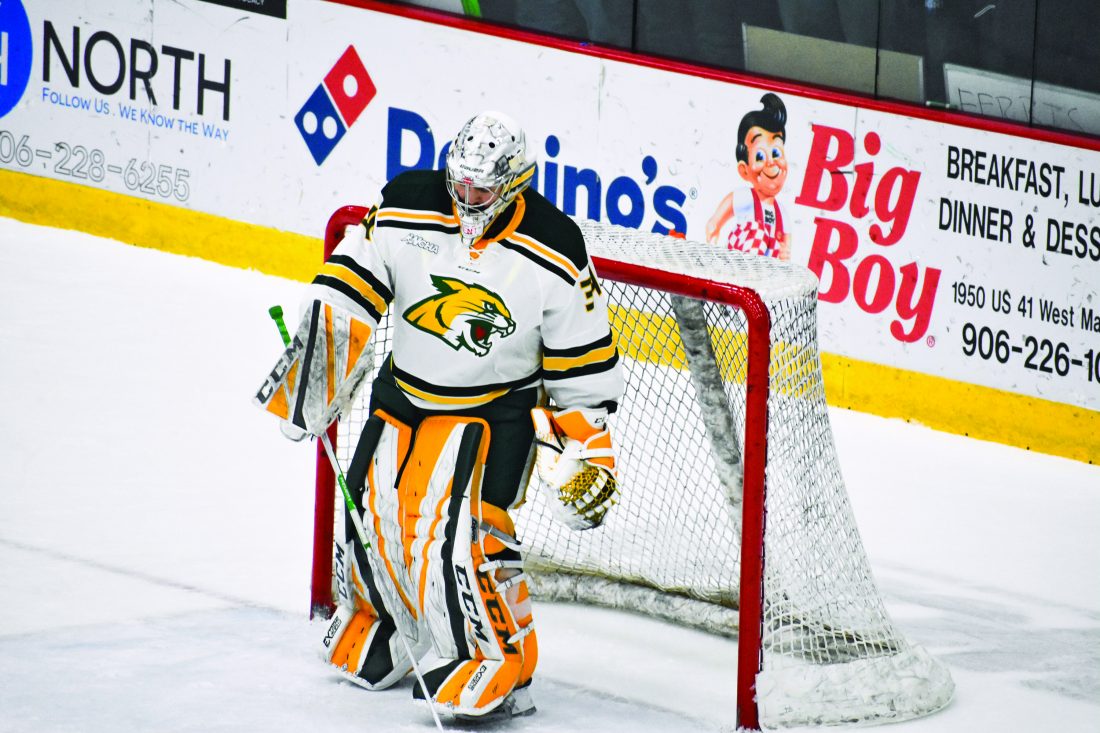 Above, Northern Michigan University goaltender Nolan Kent clears his crease during a game against Ferris State Dec. 14, 2018 at the Berry Events Center in Marquette. (Photo courtesy of Shannon Stieg)

MARQUETTE — It’s not easy to replace one of the all-time greats at your school, but that’s what Nolan Kent has the chance to do this fall for the Northern Michigan University hockey team.

After playing backup to two-time WCHA Goaltender of the Year Atte Tolvanen, Kent is now the No. 1 guy in net for the Wildcats.

It may be a surprise for NMU fans to look to the net during games and not see No. 41 guarding it as he has for the last four seasons. But Kent said that he learned quite a bit from watching a guy who tied an NCAA record with four straight shutouts, and that he’s bringing what he’s learned to the rink.

“Yeah, I actually learned a lot from him,” Kent said. “He’s a consummate professional. The way he comes to the rink every day, prepares every day, just the routines that he has.

“The little things like that and the parts of his game, too. How well he skates and how he tracks the puck. When you watch a guy like that every day, you learn a lot. He was a really big help last year.”

Kent saw very limited playing time last season as Tolvanen started every game. The only action Kent saw was when Tolvanen left the ice due to injury one game against Ferris State (Tolvanen later returned) and when Tolvanen was pulled during a blowout loss to Minnesota State.

That left Kent with a grand total of just under 14 minutes on the ice, which isn’t exactly common for a goalie who will be the presumptive starter for his team.

However, he said that it was a good experience for him because now he knows what he’ll see this season.

“It was exciting and nerve-racking going in (when Tolvanen was injured against Ferris State) because I’d never played a college game before,” he said.

“I think I got my emotions out of it and hopefully, going into next year, I’ll know what to expect more. I’ve seen what a college hockey game looks like, not just from the bench, but from the crease. It’s a little different, but I think I’ll know what more to expect this year.”

With a young defensive corps and losing some veteran scorers, the Wildcats are going to need a steady netminder to create some security. Kent thinks he can be that guy.

“I get set early and I’m not chasing pucks all around the ice. I think I keep my emotions in check well during the game and I think I just want to be a steady influence back there for the guys.

“I’m heading into camp that I want to be the No. 1 guy. I’m going to have to prove to everyone that it’s my job. That’s all I can do is to work hard every day and instill confidence in my team.”

Northern head coach Grant Potulny is confident in Kent and said he has the ability to not only be the No. 1 goalie, but to stay that way.

“There’s nothing in his history that tells me he can’t be,” Potulny said. “He’s won a(n Alberta Junior Hockey League) championship, his numbers in junior hockey were out of this world.

“I think college hockey was a shock to him last year. There still is a small difference between maybe some western Canadians and the American player in terms of off-ice development of your body. It’s not right, wrong or different.

“I think the American player is more exposed to training sooner. and honestly the reason I believe that is I think they’re exposed to football, basketball, baseball at a young age where training is an essential part of that sport.

“Nolan has completely changed his body over the course of the year. Going into the year, he’s got the leg up.

“He’s been here, he knows how we operate and he knows what’s expected out of our goaltenders.

“So going into camp, I’d say he has the leg up, but it’s going to be a competition just like every other spot on our team.”

When asked if he has any major goals for himself this year, Kent said his were simple and that he’s looking forward to showcasing what he can do as the new starting goalie.

“It’s a cliche, but I feel like every guy, every goalie, that’s what you should strive for. The individual accolades are great, but if you can win something, that’ll leave something for everybody to remember you and the team by.