Looking to build on good spring 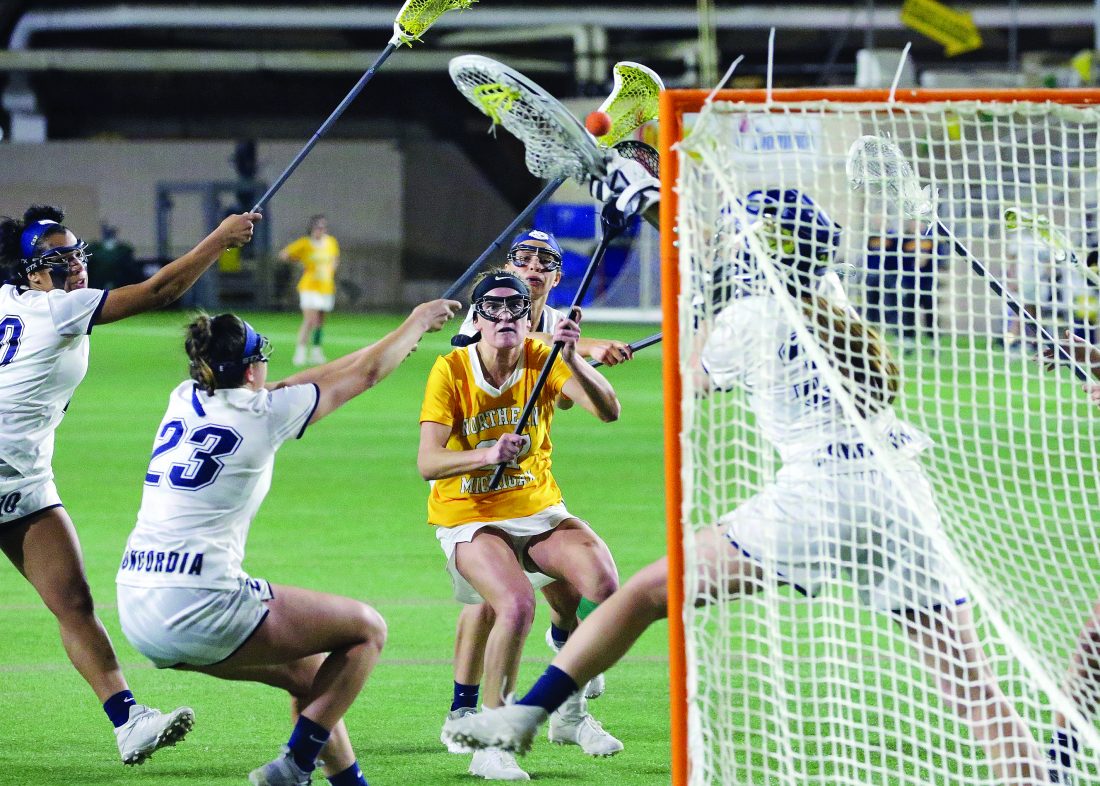 Northern Michigan University's Graison Ringlever, center, scores her sixth goal of the game against Concordia on this drive up the middle in the second half of their GLIAC women's lacrosse game played at the Superior Dome in Marquette on Wednesday, April 10, 2019. (Photo courtesy Daryl T. Jarvinen)

MARQUETTE — After earning its first GLIAC Tournament appearance ever this past spring, the Northern Michigan University lacrosse team will look to build on that next year as the Wildcats recently released their 2020 schedule.

The season opens with three straight home games starting with a game against McKendree February 15 in the Superior Dome. That will be followed by a contest against Lewis on Feb. 21 and a battle with Quincy Feb. 23.

NMU then heads out on the road for a long three-game stretch in Colorado. The Wildcats open with Colorado-Colorado-Springs March 2 and then a game at Colorado Mesa on Mar. 4. The trip concludes with a contest against Regis on Mar. 7.

Northern begins GLIAC action on Mar. 13 at Upper Iowa and it’ll follow that battle with a game at Concordia St. Paul Mar. 15.

The Wildcats finally come back to Marquette on Mar. 22 to face Ashland, who they beat in the Dome to earn their GLIAC Tournament bid last year. NMU scored 24 goals in the game, which were the most in school history.

Northern goes on another road trip later in the month as it travels below the Mackinac Bridge for games against Grand Valley State Mar. 27 and Davenport on Mar. 29.

April begins with two home games as the Wildcats host Concordia on the 9th and Upper Iowa on the 11th. NMU travels one more time in the regular season to take on Ashland Apr. 19 before playing GVSU at home on the 24th and closing out the regular season against Davenport on the 26th.

After completing a huge season goal with a GLIAC Tourney appearance in just its third year as a program, Northern has a good opportunity to have an even better season next spring. Senior star Graison Ringlever returns after becoming the first Wildcat to notch 100 career points and 100 career goals. She also picked up her second All-GLIAC Honorable Mention award. Junior Tess Kostelec will also be back after setting a new school record with nine assists and sophomore goalie Cam Stilson return in net for the Wildcats.