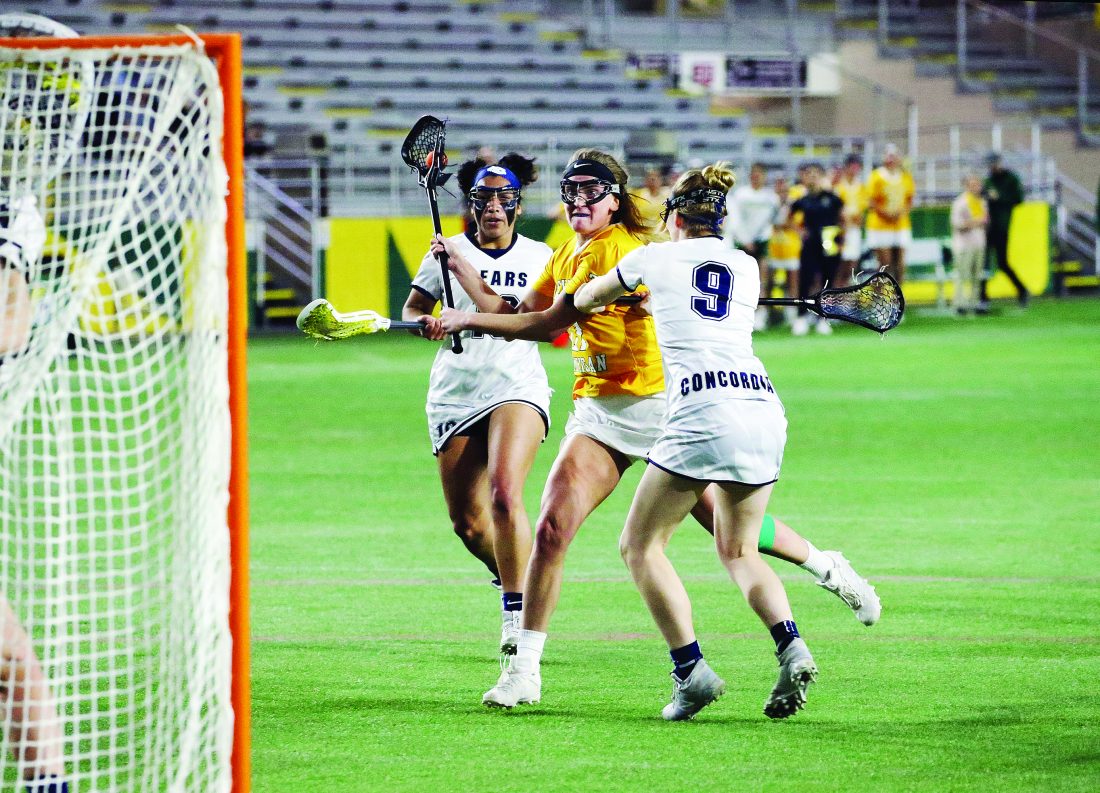 Northern Michigan University's Graison Ringlever, center, finds a seam in the Concordia defense as she prepares to fire this shot past Concordia goalie Katie Lottsfeldt in the second half of their GLIAC women's lacrosse game played at the Superior Dome in Marquette on Wednesday, April 10, 2019. Defending are the Golden Bears' Lexi Stanley, left, and Margot Coomes. (Photo courtesy Daryl T. Jarvinen)

That what the Golden Eagles website reported on July 9, though NMU hasn’t posted anything about her departure on its athletics website, www.nmuwildcats.com.

The Golden Eagles play in the Big East Conference with teams that include Georgetown, DePaul, Villanova and Butler. MU finished second in the regular season and reached the semifinals of the conference tournament this spring.

“I’m honored to join Coach Black’s staff at MU,” Ward said on the Marquette University athletics website, gomarquette.com. “From the second I stepped on campus, I felt right at home. The enthusiasm for the program from the athletic department is something that really excites me.”

The Marquette University head coach said she believes that Ward’s experiences as a head coach and recruiter will be beneficial to her new program.

“She brings a ton of coaching experience from various different schools and levels of the game,” Black said on the MU website. “She will be able to help our team to new heights with some fresh ideas and unique ways of doing things.

“She’s extremely passionate about the game and can jump right into this program with a wealth of knowledge.”

Ward was the only head coach in NMU’s three years of varsity women’s lacrosse, taking the job in December 2015 and coaching the team from 2017-19.

She started from scratch, taking what had been a club program and brought in some quality young players to make it competitive in the GLIAC.

Her teams improved each year, beginning at 2-13 overall and 0-7 in the GLIAC in 2017, when the team lost every league match by at least a dozen goals.

The Wildcats also went 2-13 in 2018, but won their first GLIAC match, a 17-16 nailbiter over Davenport at the Superior Dome in Marquette, and lost other conference matches by just three and six goals.

This past spring, Northern went 4-12, including 3-8 in the GLIAC with their first league road win, and qualified for the GLIAC Tournament for the first time.

Her top player was probably 2019 junior Graison Ringlever, who became the program’s first player to reach 100 career goals and 100 points. She was named All-GLIAC Honorable Mention in both 2018 and 2019, leading the Wildcats with program records of 42 goals and 49 points last season.