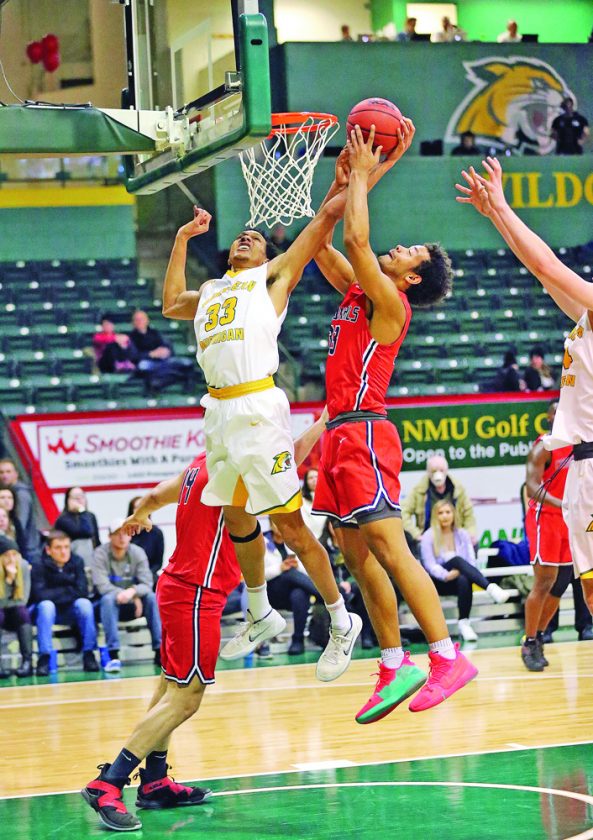 NMU's Myles Howard battles with SVSU's Avery Lewis for a rebound in the second quarter of their GLIAC basketball game played at the Berry Events Center in Marquette on Thursday, Feb. 7, 2019. (Photo courtesy Daryl T. Jarvinen)

MARQUETTE — The upcoming Northern Michigan University men’s basketball season will be a different one in more ways than one.

First off, the Wildcats will have a new head coach after former coach Bill Sall moved downstate to be the bench boss at his alma mater, Calvin College. There will also be two new assistant coaches as Charles Belt and Terry Nash have headed to Missouri to lead the program at William Woods University.

Secondly, unlike last year, NMU won’t open the year an exhibition game against a Division I program like it did with Michigan State. Instead, the Wildcats will start off this year’s campaign with the GLIAC/GLVC Challenge November 9-10 at McKendree University and then will go to Minnesota to face Minnesota Duluth Nov. 15 and Southwest Minnesota State Nov. 16.

The third thing that is different is that the basketball program will get to experience the type of trip the hockey team has to make on a regular basis as the Wildcats will participate in the Alaska-Anchorage Classic Nov. 29-30.

NMU’s first home game doesn’t happen until December 5 when it takes on Northwood followed by a contest against Saginaw Valley State Dec. 7. After a trip to Houghton to face Michigan Tech Dec. 15, the Wildcats will close out the first half of the season with two home games. They host Hillsdale Dec. 19 and Ripon Dec. 30.

The second half of the year starts off with a home weekend against NCAA Tournament participant Ashland January 2 and Wayne State Jan. 4. Northern then heads to Purdue Northwest Jan. 9 and Wisconsin-Parkside Jan. 11 before returning to Marquette for home games against Ferris State Jan. 16 and Lake Superior State Jan. 18.

The game against Ferris will be a rematch of the GLIAC Tournament game last season, which was won by the Wildcats.

NMU embarks on a four-game road trip after that, starting with a game at Davenport Jan. 23, followed by contests at GLIAC Tournament champion Grand Valley State Jan. 25, Saginaw Valley State Jan. 30 and Northwood February 1. The Wildcats come back to the Berry Events Center for a two-game weekend against Parkside Feb. 6 and Purdue Northwest Feb. 8.

NMU lost the GLIAC’s top two scores in Naba Echols and Isaiah Johnson to graduation, but returns 12 veteran players including All-GLIAC Defensive Team honorees Sam Taylor and Myles Howard as the Wildcats will try to make the GLIAC Tournament for the third straight season.