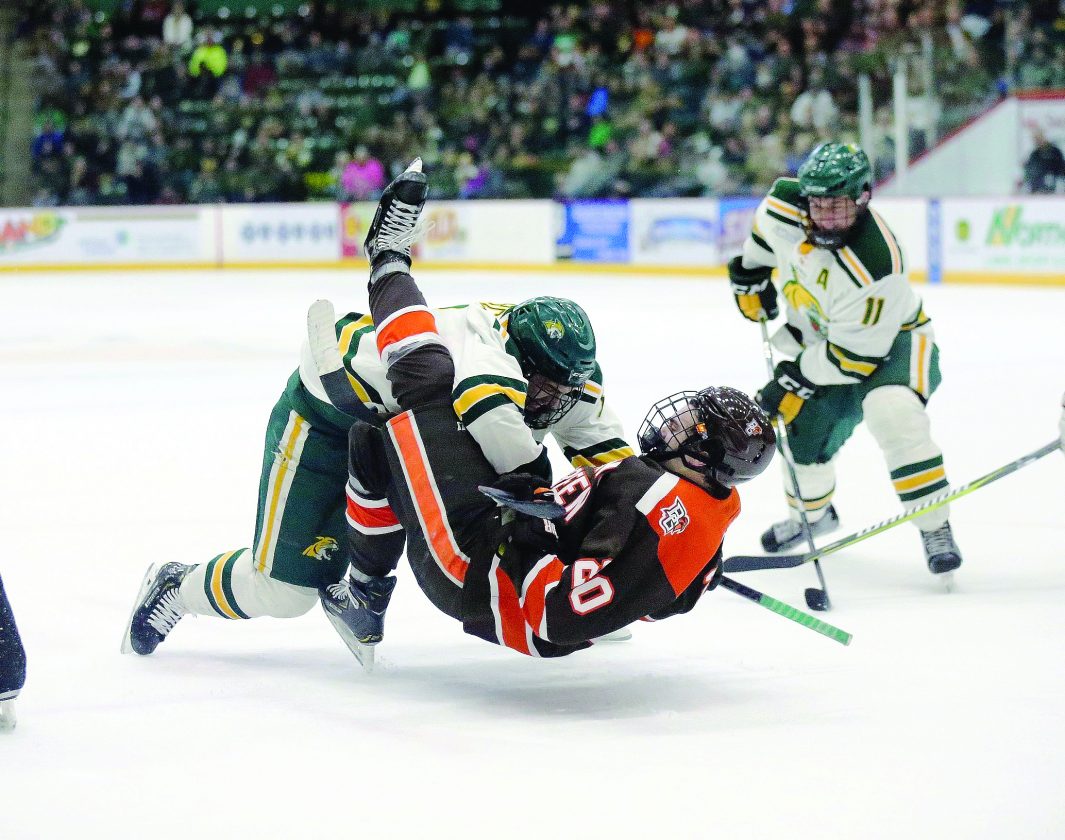 Northern Michigan University's Denver Pierce, top left, slams Bowling Green State's Connor Ford to the ice following a faceoff in the second overtime of the second game in their WCHA playoff series at the Berry Events Center in Marquette on Saturday, March 16, 2019. Moving toward the puck is the Wildcats' Adam Rockwood. (Photo courtesy Daryl T. Jarvinen)

MARQUETTE — School officials at Northern Michigan University and six other WCHA institutions intend to be tight-lipped about their exploration into leaving the league in the next two years.

A news release was posted Friday on the NMU athletics website, www.nmuwildcats.com, with a copy of it posted the same day by Morris Kurtz, listed as a long-time athletics administrator and hockey consultant. He was identified by the Minneapolis Star-Tribune as a former St. Cloud State (Minnesota) athletic director.

The release said Kurtz has been “engaged … to serve as spokesperson and to assist them as the group sets out to transform the college hockey landscape.”

Not part of this statement are the three WCHA members located outside the Midwest states of Michigan, Minnesota and Ohio — Alabama-Huntsville, Alaska-Anchorage and Alaska-Fairbanks.

Friday’s release from Kurtz and NMU said the seven schools are looking at “the exploration of a new Division I men’s hockey conference that would begin play with the 2021-2022 season.”

“During these initial stages of developing the potential new conference there will be no further comment from these institutions, including Presidents, Athletic Directors, and Coaches.”

Instead, the media have been instructed to contact Kurtz at a phone number with a Delaware area code.

“Late (Friday) afternoon, the WCHA office received communication from several of our Men’s League institutions that they intend to explore the creation of a new Division I men’s hockey conference that would begin play in 2021-22.

“The institutions have indicated they intend to compete in the WCHA during the 2019-20 and 2020-21 seasons.

“While this news is disappointing, the WCHA will work to assure that any members that do withdraw do so in accordance with WCHA Bylaws.”

The statement from Kurtz and NMU also addressed a possible withdrawal:

“As current members of the Western Collegiate Hockey Association men’s league, the schools have independently submitted formal Letters of Notice to the conference office, initiating the withdrawal process in accordance with WCHA Articles of Incorporation and Bylaws. The institutions will continue to play in the WCHA during the 2019-2020 and 2020-2021 seasons.”

The submission of the letter may have more to do with keeping the schools’ options open for 2021 than as a decision already made to leave.

The WCHA was part of a major NCAA Division I hockey shakeup in 2013, when the Big Ten began a hockey conference for the first time, pulling members away from the WCHA and CCHA. Just a year ago, Notre Dame joined the Big Ten to make it a seven-school league.

Some other institutions, mostly other schools that also play in NCAA Division I in other sports, formed the National Collegiate Hockey Conference in 2013. They were Western Michigan, North Dakota, Miami (Ohio), Minnesota-Duluth, Denver, Colorado College, Nebraska-Omaha and St. Cloud State.

The CCHA was left to disband with the remaining Division I schools, mostly smaller schools that play mainly in NCAA Division II in other sports, were joined by Bowling Green to make a revamped WCHA in 2013.

Friday’s news release also gives reasons for the seven schools’ possible break from the league, citing their common aspirations that include a tighter league in terms of geography:

“The group is comprised of institutions rich in history and tradition with a strong commitment to academic and athletic excellence. They are like-minded in their goals and aspirations for the potential new league with a focus on improving regional alignment and the overall student-athlete experience while building natural rivalries within a more compact geographic footprint.”

The release and some subsequent statements from Kurtz seem to make the formation of a new conference almost a foregone conclusion:

“The potential new conference is also committed to providing the best possible collegiate hockey experience for its student-athletes, fans, and all stakeholders,” the news release states. “Finally, the group would plan to establish itself as an elite hockey conference that would have the highest standards for overall competitiveness and rigorous non-conference scheduling, along with a level of institutional investment that demonstrates significant commitment to their hockey programs and facilities, while also establishing relationships with corporate partners and others that create a high degree of visibility and positive media exposure for the league.”

Reached by the Star-Tribune later Friday, Kurtz said in a phone interview that “you want to associate with what you feel are like-minded institutions in terms of commitment to facilities, to funding, to coaching salaries. This exciting endeavor is something these seven institutions feel very strongly about.”

Kurtz said the new conference doesn’t have a name yet.

“We hope to have that announced very soon,” he said.