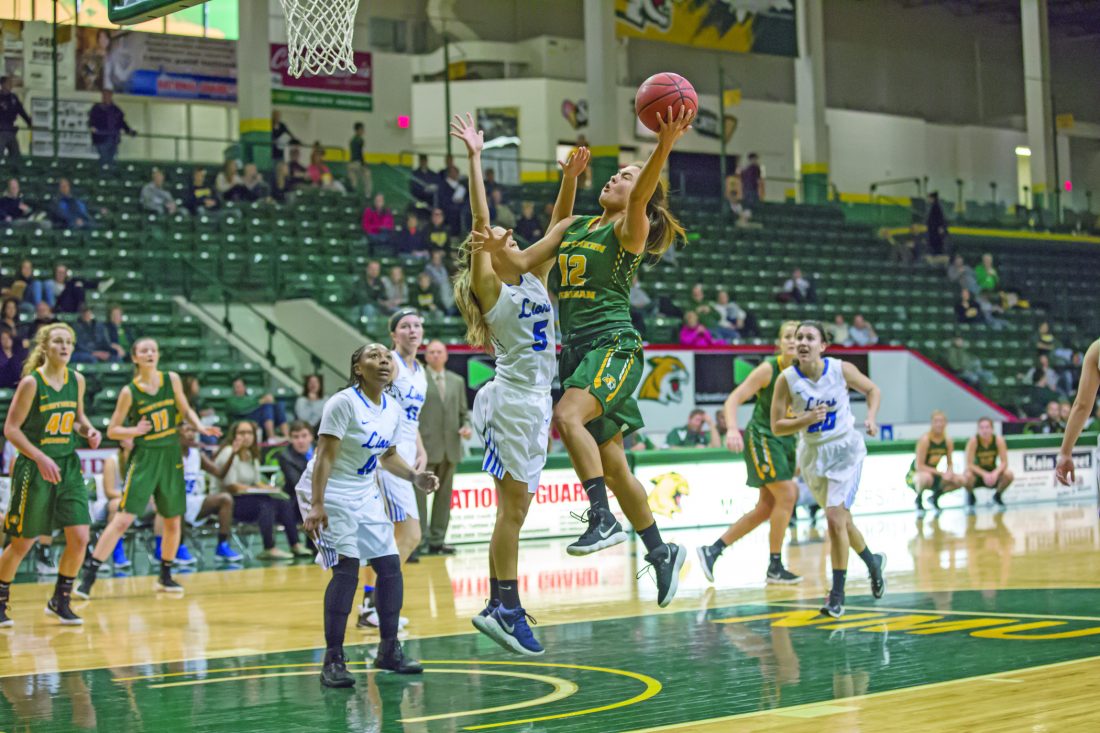 MARQUETTE — There’s a lot of siblings in the Upper Peninsula that have gone on to play sports at the next level, but it’s uncommon for them to play different sports.

Typically, if they both played football or softball or hockey, they’ll continue to do so in college, but that’s not the case for the Huebner sisters.

Former Marquette Redettes Amber and Shayla have gone on different paths at Northern Michigan University with the former choosing to deke her way past defenders on the basketball court, while the latter shifted her focus to blazing past the competition on the track.

“I started playing sports at a really young age, like soccer and basketball,” Shayla Huebner said. “And then track was just something all the kids kind of did in middle school and then I continued in high school. I played every sport every season that I could. I remember the first day of track practice, they were like ‘You see that record up there? That 400 (meter) record. You’re going to get that.’ It took me four years. I liked running and I thought I had more potential there and I wanted to see what I could do in college.”

Amber, on the other hand, stuck with basketball and continued to improve her game while playing for the Redettes, eventually making the Upper Peninsula Sportswriters and Sportscasters Association (UPSSA) All-U.P. Dream Team as a senior.

“My mindset was that I can run for the rest of my life,” she said. “Running is more of a lifelong thing as opposed to basketball. That kind of played a factor and I knew that with my basketball game, it didn’t reach its full potential in high school. I knew that I could get better and I wanted to get better. I knew I could keep working at my shooting skills and I guess I wanted to maximize my potential in college and see if I could become a better ball player.”

“I really loved when I went to nationals,” Shayla said. “I think it’s a really cool experience. It’s kind of a shame that not everyone gets to go, but it’s really cool to be there and to be amongst the best and watch the tops in the nation. That’s probably the coolest thing I’ve gotten to be a part of.”

She’s also come a long way from her first meet as a Wildcat where she was a little anxious, but now competing against the best in the nation is almost routine.

“I was definitely nervous,” Shayla said with a laugh. “I got in the box and I remember my arms shaking. That’s how nervous I was. I think maybe my younger years I’d get nervous. Now as a senior, I don’t really get that nervous because I’ve ran so many races. I guess after all the practices, I’m a little more confident and I know what I’m capable of. The first meet was a whole new thing for me.”

The first game on the court at NMU was definitely a new thing for Amber. She ended up getting some playing time as a freshman, suiting up for 16 games, but she said she didn’t even remember her first career basket.

“I remember being so nervous,” she laughed. “It’s hard to describe how nervous because I was just coming off an injury and I didn’t really work out the summer before. I knew I wasn’t as skilled as I should be for the Division II level because the GLIAC is a hard league. I was really nervous, but I was excited. It was really cool to put on a jersey that I’ve been watching girls play in for years growing up. It was a really humbling and cool experience honestly, even though I was nervous.”

Amber got over her nerves though this season with the help of some extra work in the offseason. Thanks to some injuries to the Wildcats roster, she earned a spot in the starting lineup late in the year and had a huge coming out party against rival Michigan Tech in Houghton, leading all scorers with 17 points off the bench.

“Last season, I didn’t play very much and I went in and asked my coach (Troy Mattson) on what I can do to get better,” she said. “He said to work on my shooting and pull-up jumpers. That’s kind of what I did, just trust the process, and not get frustrated with it.

“Then a couple girls had some injuries and coach told us that we’d have to step up and be tough. I just really took to heart some things he was saying. ‘We don’t have to be the most skilled, we just have to work the hardest.’ I feel like I have a lot of leadership qualities and people have told me that. I just want the best for our team and when a couple girls got injured, coach had me play more minutes.”

Both Huebner and the Wildcats’ hard work paid off as they upset Grand Valley State in the GLIAC Tournament and almost won the conference title, but fell in a close game to Ashland. Northern got its revenge though as it took down the Eagles in the first round of the NCAA Tournament, so now both Huebner sisters have gotten a chance to play on the national stage.

“It was such a great feeling,” Amber said. “The NCAA Tournament was one of the best experiences of my life. To be able to share it with the girls on my team and to do that for NMU was great. Now we want to keep going back, so hopefully, we’re back there.”

Shayla may be closing out her career and Amber is at the halfway point, but they’ve been on the same ride together for quite a while. While other siblings may be in constant competition together and have heated rivalries, the Huebners are different. They may differ in personalities as Amber describes her sister as more “reserved” and herself as “loud and obnoxious,” but they’re supportive of each other and just want the other to succeed.

“I think I started sports, probably around four (years old) and whatever I did, she (Amber) wanted to do,” Shayla said. “We’ve been playing together since we were little girls. There was a period of time where we were kind of separated like she was at Bothwell (Middle School) and I was in high school and then when I went to college, she was by herself. She had to play on her own, but I think we were really good teammates. We didn’t really fight. We weren’t against each other or wanting to beat each other. We’re kind of different athletes. We both have our strengths and we both have our weaknesses and I think we complement each other well.”

“We’re really close,” Amber agreed. “We played all the same sports my whole life and we have a bunch of things in common. It’s nice having a best friend right down the hallway. I’ve seen all her success being an all-American at Northern. She’s was the perfect person to look up to and she demonstrated how to be successful as a student athlete. She has a 4.0, so it was nice to have that sister or best friend or that role model pushing and motivating me. When I’m in the basketball season and I’m not feeling positive, she always picks me up. I couldn’t be more thankful to have her as a sister.”

Amber got a chance to compete with her sister again last season when she joined the track team after the basketball season was over, but she says that won’t happen again this year.

“I basically just did it because I didn’t get to run my senior year,” she said. “It was really fun because I loved being able to see Shayla compete. Being isolated in the U.P., all the meets are super far away. I got to travel with the team and go watch her run, that was another big part of why I did it was to see Shayla run. I got in really good shape and if anything, it put me at an advantage for basketball because I was better in running shape. I don’t think I could do that again though.”

Although she won’t have her sister as a teammate during the last part of her senior season, Shayla treasured that short time as well as all the time she gets with Amber.

“She’s not really like my sister, she’s kind of like a best friend,” Shayla said. “She’s younger than me, but she’s done so well in sports and in school. Now I kind of look up to her even though I’m the older one. She’s super busy with sports and school, but I know at the end of the day, she’d be there for me.”

They may be excelling in different sports in college, but the bond between the Huebner sisters remains strong and it looks like it will be for years to come.