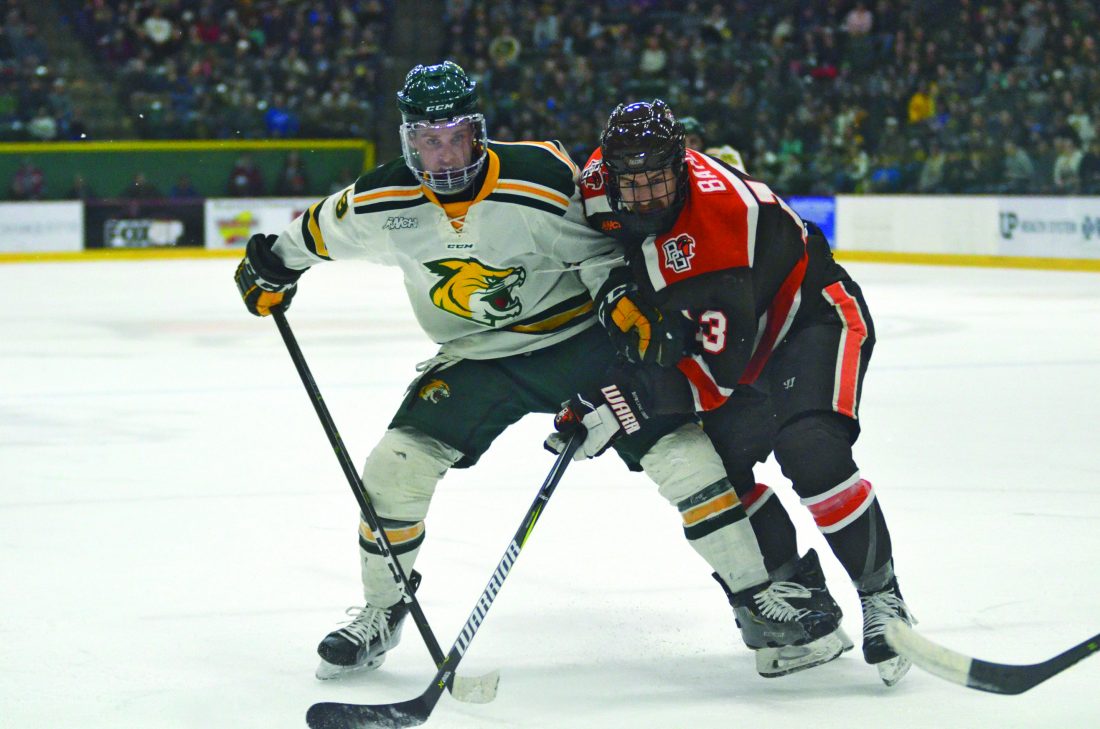 The NMU women’s basketball team earned Team of the Year after a very impressive season. The Wildcats finished with 23 wins, four of them over ranked opponents and two of them over top 10 programs in less than a week.

Not only that, but they handed No. 9 Grand Valley State its only GLIAC regular season loss in the regular season and then upset the Lakers again on their own court in the GLIAC Tournament to advance to the conference title game.

After losing to Ashland in the GLIAC Championship, Northern bounced back in the NCAA Division II Midwest Regional Quarterfinals by upsetting the No. 4-ranked Eagles in a rematch, which also earned the Biggest Upset award at the Wildcats ceremony.

The Wildcats finished third in the nation by allowing only 52.1 points per game and held Ashland to 30 points below its average in both the GLIAC title game and the NCAA Tournament game.

NMU head coach Troy Mattson picked up his 200th career victory during the season and both Darby Youngstrom and Lexi Smith made the All-GLIAC First Team.

Jessica Schultz made the All-GLIAC Second Team and Sydney Dillinger earned a spot on the All-Defensive Team.

Echols averaged 19.2 points per game, which was second in the GLIAC and led the team with 3.7 assists per game. He was named GLIAC Player of the Week several times and made the All-GLIAC First Team for the second straight season.

Loggins had a huge year for the Wildcats. He finished second in the country in goals with 23 and was tied for the national lead in power play goals (10) and shorthanded goals (three). He also was named to the All-WCHA First Team for the second year in a row, and earned WCHA Offensive Player of the Year and overall WCHA Player of the Year. To top that off, he earned a spot on the All-American Second Team. He is currently a member of the American Hockey League’s Grand Rapids Griffins, the Detroit Red Wings’ minor league affiliate.

Youngstrom was named Female Athlete of the Year after she came back from an injury her junior year to lead the Wildcats with 11.3 points per game.

She scored a career-high 26 points against Ashland in the GLIAC Championship and made the All-GLIAC First Team.

The Gildo Canale Outstanding Senior Athlete awards went to men’s Nordic skier Ian Torchia and female sprinter and former Marquette Redette Shayla Huebner. Torchia earned six All-American awards, was the NCAA Champion in the 20K freestyle in 2018 and the USCSCA Nordic Skier of the Year. With two All-American awards this year, he’s now tied for the most All-American honors in team history.

The other major awards that were handed out were the Humanitarian of the Year to football player Aaron Rochow; the Brian Franks Too Strong award to hockey forward Adam Rockwood and women’s basketball center Taylor Hodell; and Breakthrough Athlete of the Year to female Nordic Skier Abigail Jarzin.

That was the 11th time a goalie had scored in NCAA history and only the fourth that a netminder had scored off his own shot.

The Best Moment of the Year award was earned by Northern football player Anthony Ladd, who returned an interception 97 years for a touchdown with 10 seconds left to seal a road win against Wayne State.