MILWAUKEE — Yasmani Grandal led off for the first time in his career and homered in his opening at-bat to help the Milwaukee Brewers snap a season-high five-game losing streak with a 6-5 win over the Cincinnati Reds on Saturday.

Grandal, who had never batted first in 795 career games, put the Brewers ahead 5-4 with an RBI double in the fourth. Two outs later, he scored on Lorenzo Cain’s bloop single that chased Reds starter Luis Castillo (7-2).

NL MVP Christian Yelich scored a run, but went 0 for 3 to end his career-high hitting streak and the longest in the majors at 18 games.

Matt Albers (4-2) pitched 1 1/3 innings of scoreless relief. Adrian Houser handled the seventh. Josh Hader struck out four of the final six outs for his 18th save.

Castillo had won seven straight decisions since a 1-0 loss to Milwaukee on April 3rd, but couldn’t get out of the fourth. He allowed six runs, four earned, on five hits with five walks and six strikeouts. The loss snapped the Reds’ season-high six-game winning streak.

Eugenio Suarez hit his 16th home run of the season in the third and added a run-scoring groundout in the fifth off Brewers starter Jhoulys ChacÌn.

The Reds tallied three times in the first for the third consecutive game of the series. This time, though, the Brewers answered in their half with four runs, highlighted by Grandal’s 17th home run on the second pitch of the game.

Derek Dietrich had an RBI triple and Yasiel Puig hit his 16th home run of the season, a two-run shot, before a slick play and a successful challenge by the Brewers ended the Reds’ opening frame.

Second baseman Mike Moustakas snared Iglesias’ grounder up the middle and flipped the ball from his glove to shortstop Arcia who fired to first. After a 61-second review, the safe call was overturned.

(AP) — The Portuguese league will resume this week as European soccer continues to make its gradual return amid ...

(AP) — Former Auburn coach Pat Dye, who took over a downtrodden football program in 1981 and turned it into a ...

NEW YORK (AP) — The National Women’s Soccer League has set the schedule for the opening round of its tournament ...

WASHINGTON (AP) — The Nationals changed course and told their minor leaguers on Monday they will receive their ... 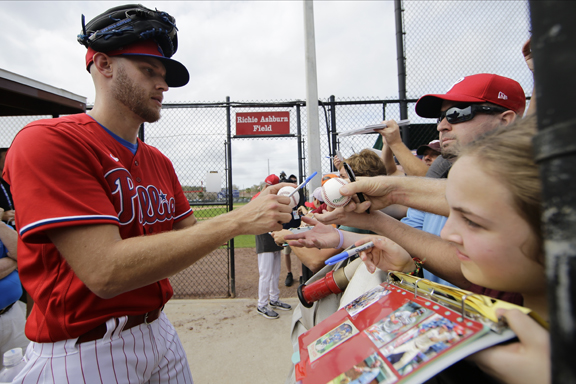