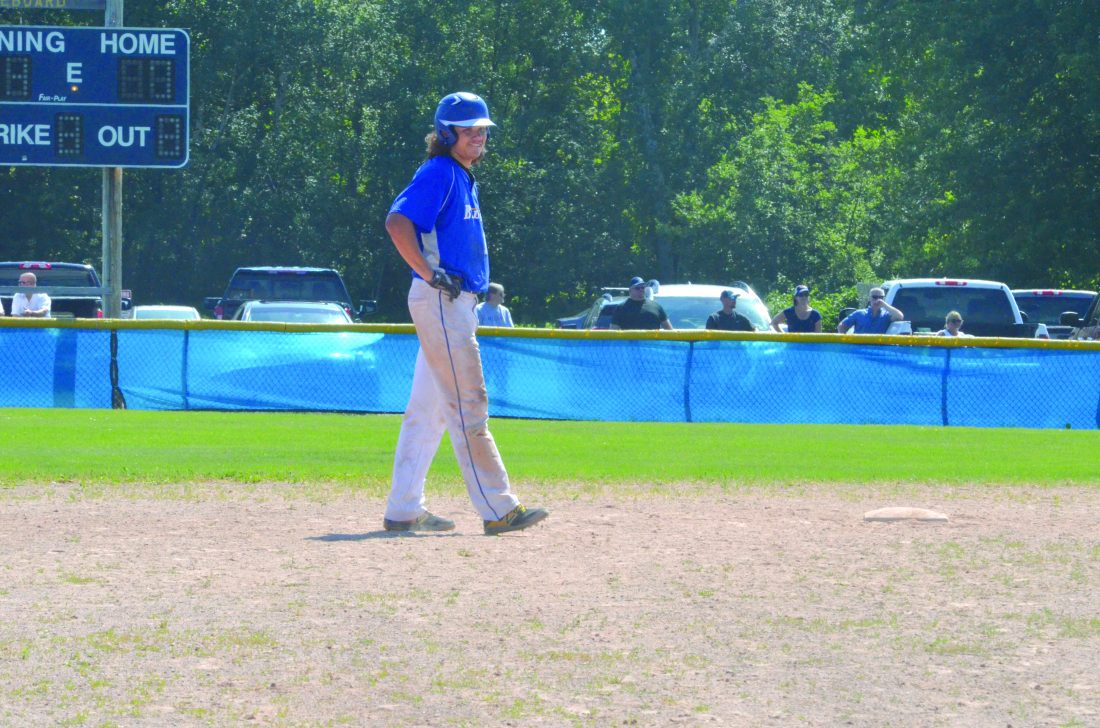 Marquette Blues runner Clayton Smith takes a lead off second base during an Upper Peninsula Under-19 Baseball League game played against the Negaunee Diamonds at Haley Memorial Field in Marquette on Saturday, July 4, 2020. (Journal photo by Ryan Spitza)

MARQUETTE — It was certainly a more somber Independence Day this year.

While many Upper Peninsula communities made the difficult but necessary decision to cancel their Fourth of July festivities amid the coronavirus pandemic, one long-standing holiday tradition continued in Marquette on Saturday morning.

That tradition is America’s traditional pastime, baseball, with the Marquette Blues hosting the Negaunee Diamonds in its annual game on the morning of the holiday.

The Blues topped the Diamonds 20-2 in four innings at Gerard Haley Memorial Field to improve to 11-1 in Upper Peninsula Under-19 Baseball League play.

On the rubber, Hogan Nemetz, Erik Johnson, Kyle Frusti and Clayton Smith each went an inning and combined to pitch a three-hitter with nine strikeouts and three walks.

The Diamonds suffered out of the gate due to a short roster, using “loaners” from the Blues and the Marquette Reds junior program to fill voids in its lineup. This made for a more laid-back, scrimmage-style contest with fun to be had by every player involved. While the primary goal is always to win, having fun is as important as it’s ever been this season.

“It’s kind of been one of those years,” Blues manager Derek Swajanen said. “From getting ready to host the (American Legion) state tournament, to playing an abbreviated season, it’s been a lot more relaxed. Everyone’s usually dressed up an hour and a half before the game, but you obviously have to take the games as they come.

“It’s a veteran team that we’ve had. A lot of these kids have played for four or five years, so they know the whole routine. It’s just great to be out on the baseball field.

“It’s great because the kids were cooped up for months and now they’re out here playing. I’ve watched kids this year have more fun. Instead of it being a stressed game and everything else, they’ve actually had fun this year. It’s good for the kids.”

The socially distanced season came together at the end of May, with area coaches forming the U-19 league comprised of American Legion teams from around the U.P.

Once granted approval from the state, the season kicked off in mid-June with strict safety protocols and guidelines in place to keep players, coaches, umpires and fans safe.

Protocols, specifically out of the Blues’ program with guidance from the city of Marquette, include no concession stands, fans bringing their own chairs, players in the dugout wearing masks and umpires standing six feet behind the catcher. Equipment is disinfected constantly and hand sanitizer is readily available for all involved with the game.

Between the lines, the Blues stormed out to a 5-0 lead in the first inning after Nemetz fanned two Diamonds hitters and allowed just one hit to begin the game.

With two runners on for Marquette in the bottom half of the inning thanks to a two-out walk and hit-by-pitch, Peterson cashed in his first two RBIs with a double to bring home Blake Henriksen and Jon Jason. Frusti followed with a double to bring Peterson home before Connor Steer and Eli Werner added RBI singles to score Frusti and Steer. The inning ended when Sam O’Neill popped out to the shortstop.

Negaunee scored its two runs in the third, but eight runs in the second inning and seven more in the fourth allowed the Blues to pull away.

Frusti, Werner and Brock Taylor each added two RBIs for Marquette. Frusti was 2 of 3 at the plate while Werner went 2-2 and Taylor 1-1. Peterson was 4-4 on the day.

Smith led the Blues on the mound with three strikeouts while Frusti, Nemetz and Johnson each had two for their combined nine.

The Blues are scheduled to host Ishpeming in a 6 p.m. Monday doubleheader.

In a normal year, the Blues and Reds would’ve hustled down to Washington Street after the 10 a.m. game to participate in the Marquette Fourth of July parade. Many would likely continue on to watch the fireworks display at Ellwood A. Mattson Lower Harbor Park in the evening.

Unfortunately for all, those things didn’t work out this year. And it’s why Swajanen and his team were delighted to offer some form of safe holiday entertainment for those who came out to watch.

“I was really surprised, there were a lot of people here,” he said. “This is a tradition that’s gone back decades. I’m glad we could continue it with the way everything is today. We kind of miss the parade and the guys over at the Legion hall. They do a great job supporting us.”

After all the holiday fun is over, however, things will start to get serious as the abbreviated season nears its conclusion.

“We’ve got six games next week, so we’ll begin the final stretch run to the U.P. championships,” Swajanen said.