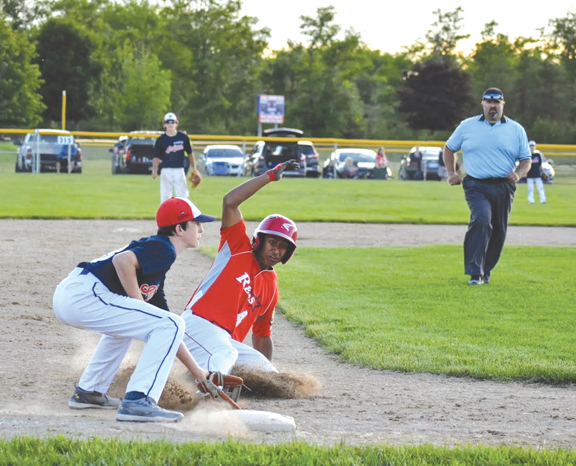 Up next: In Friday doubleheaders, the Reds host Iron Mountain at 5 p.m., and Blues go to Ishpeming at 6 p.m.

MARQUETTE — The Marquette Blues held on for a one-run win in their opener, then blew past Bark River in the nightcap for a doubleheader sweep at home in the Upper Peninsula Under-19 Baseball League on Wednesday night.

Meanwhile, the Marquette Reds traveled to Gladstone and split with the Junior Braves that same night.

Both teams are back in action with doubleheaders on Friday, with the Reds hosting Iron Mountain at 5 p.m. at Haley Memorial Field, while the Blues travel to Ishpeming for a date with the Blue Storm at 6 p.m. 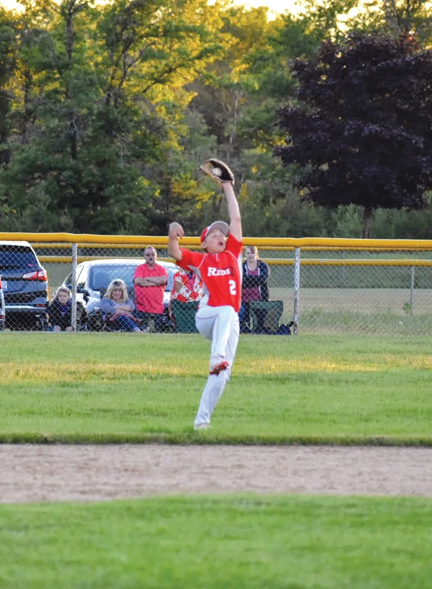 The Marquette Reds' Braiden Noskey falls back while making the catch that ended the nightcap of an Upper Peninsula U-19 Baseball League doubleheader played at Gladstone on Wednesday. (Photo courtesy Danielle Peterson)

In the opener, Marquette scored three times in the bottom of the fifth to break a 1-1 tie, then hung on in the top of the sixth and final inning after Bark River pulled back within one.

The Blues’ Blake Henriksen drew a walk in the fifth to score a run, while in the top of the fourth, the visitors scored their tying run when Adrian Mercier also drew a bases-loaded walk.

Marquette’s Hogan Nemetz and Clayton Smith each collected two singles, with Smith also getting an RBI. Peter VandenAvond had the game’s lone extra-base hit, a double, as he also scored a run and Eli Werner had the Blues’ other hit as Marquette was outhit 9-6. Jakob Peterson drew two walks, scoring twice despite just one official at-bat, and had the team’s most fielding chances with eight as Marquette didn’t commit an error.

Smith started for the Blues, going four innings as he allowed one earned run on five hits and three walks as he struck out four. Erik Johnson worked the final two innings and got the win, giving up two earned runs on four hits and two walks while fanning two.

In the nightcap at Haley Field, Marquette broke wide open a 2-2 game with nine runs in the bottom of the third to eventually invoke the mercy rule. Henriksen ripped an RBI triple in the big rally.

Henriksen finished with four RBIs, going 2 for 2 with his other hit a double, as he also scored three times, drew two hit-by-pitches and stole a base.

Smith also was 2 for 2 with a triple and three RBIs, a run and a walk. VandenAvond had a hit, RBI and run; Nemetz a hit, two walks and three runs; and Peterson a hit, RBI, run, walk and hit-by-pitch. Jon Jason had just one official at-bat, but had an RBI as he twice was hit by a pitch.

Smith’s first-inning single drove in two runs to give his team an early 2-0 lead.

Jason went all four innings on the mound to get the win, allowing two earned runs on five hits and three walks as he notched 3 K’s.

In the opener at Gladstone, the Junior Braves scored five runs in the bottom of the fifth to erase Marquette’s 7-4 lead of this six-inning game.

The teams traded leads throughout, with the Reds going ahead 1-0 in the top of the first, 2-1 in the second and 5-3 in the fourth.

Marquette’s Easton Miller hit a double as he, Zach Bukowski and Nick Pantti each had RBIs in the Reds’ 11-hit attack.

Gladstone stole 12 bases in the game.

The Marquette Reds’ Braiden Noskey falls back while making the catch that ended the nightcap of an Upper Peninsula U-19 Baseball League doubleheader played at Gladstone on Wednesday. (Photo courtesy Danielle Peterson)

In Game 2, Marquette kept on its hitting shoes, racking up another 11 hits to make up for six fielding errors.

The Reds broke a 3-3 tie with three runs in the fourth and four more in the top of the fifth to go up 10-3.

Bukowski’s fielder’s choice was good for an RBI in the fourth and a double for another two runs knocked in during the fifth. He drove in four runs, collecting two doubles, scoring twice, stealing three bases and getting hit by a pitch. In all, the Reds stole 11 bases in the game as Jake Toyras also had two swipes.

Pantti went 2 for 2 with an RBI in the fourth, while Paavo Mannisto was also 2 for 2 with a fourth-inning RBI and run. Sarles had a hit and scored twice, drawing a walk and stealing a base.

In the fifth, Bukowski doubled and Dallas Cobe walked.

Pantti was the second of three Reds’ pitchers and picked up the win, going 2 2/3 innings, allowing two earned runs on two hits and five walks as he fanned one. Mannisto started and went two innings, allowing three runs — though just one earned — on two hits and two walks as he K’d two. Bukowski went the final 1 1/3 innings, giving up an unearned run without a hit as he fanned two.