Scoring every time up: Marquette Reds score in every inning played of doubleheader sweep at Bark River 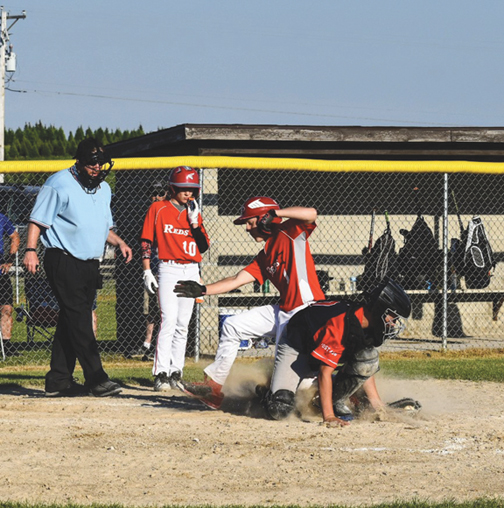 The Reds’ Logan Peterson, center, is safe at home plate in the Marquette team’s doubleheader sweep at Bark River on Thursday. Batting and waiting for the play to develop is teammate Wyatt Kulik, left. (Photo courtesy Danielle Peterson)

Up next: Marquette Reds scheduled to host doubleheader vs. Norway-Niagara, Wis., at 6 p.m. Tuesday (tentative)

BARK RIVER — There just wasn’t enough time for the Marquette Reds to fit in more than 31 runs in a doubleheader sweep at Bark River on Thursday evening in the Upper Peninsula U-19 Baseball League.

With the first game shortened to five innings due to the mercy rule, the Reds won 19-4 with a nine-run fifth inning. But that already pushed the boundaries of darkness in the nightcap, when Marquette again prevailed 12-8 in just two innings.

Tentatively, the Reds (3-1) are back in action on Tuesday evening when they host Norway-Niagara, Wis., in a 6 p.m. doubleheader. Earlier this week, the Marquette teams hadn’t yet received permission to play at Haley Memorial Field in Marquette.

After playing at the league tournament in the Escanaba area this afternoon through Sunday, the Marquette Blues also play Tuesday in a single game at Gladstone at 6 p.m.

Here is a roundup of Thursday’s games:

Marquette scored in every inning Thursday, building a 10-2 lead in the middle of the fourth inning of the opener. The big hits include Paavo Mannisto getting an RBI single as part of a three-run first inning.

Isaac Sarles started and earned the pitching win, going three innings as he surrendered only two unearned runs on five hits and two walks as he struck out five. Jennings and Nick Pantti each worked an inning, Jennings allowing an earned and an unearned run on two hits, while Pantti allowed no runs and no hits. Each of the relievers notched a strikeout.

In the Reds’ 17-hit barrage, Zach Bukowski went 3 for 3 with two RBIs and a run scored. Mannisto, Toyras and teammate Braiden Noskey each had two hits, including the game’s only extra-base hit, a double, by Mannisto.

Mannisto and Toyras each had two RBIs and two runs, while Noskey and Easton Miller each scored twice. And Mannisto had three and Toyras two of the Reds’ 11 stolen bases.

Ethan Ives was among a pair of Bark River batters with two of their team’s seven hits.

Cobe added two RBIs and two runs, while Miller also scored twice and Pantti had one RBI. Mannisto had just one hit, but collected two RBIs and scored.