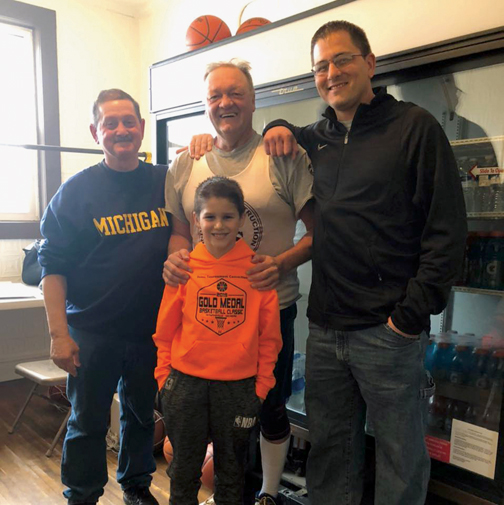 “Our focus is to keep the current atmosphere that the tournament has.” — Bryan Maule, co-director, Gold Medal Classic Independent Basketball Tournament

HERMANSVILLE — In Hermansville, Powers and areas around those northern Menominee County villages, an annual sign of spring for the better part of the last century has been the Gold Medal Classic Independent Basketball Tournament.

But not this year.

For the first time since World War II, the tourney was canceled, another event lost to the coronavirus pandemic. It last was called off from 1943-45 during World War II.

The tournament committee posted April 11 on its official Facebook page: “We had more teams enter this year in each division, along with a high number of teams and talent in the top divisions. Huge thank you to all teams and sponsors. We will post dates for 2021 in a few months, likely time frame of 2021 tourney will be end of March, beginning of April.”

This would have been the 82nd year of the Gold Medal Classic. The tournament’s inaugural year was 1936, drawing 12 teams. Tournament director Joe Rodman saw that number increase to 16 in 1937, then 26 in 1938, when he decided to split the teams into a Class A and Class B.

The two-division format was used until after WWII. After the event was put on hold, Glenn Fleetwood becoming tournament director until 1952.

Rodman’s younger brother, Frank, then took over as tournament director for about a dozen years before stepping aside for Doug LaCoursier, though at age 93, Frank Rodman remains involved with the tournament to this day, a source of historical information and local media assistance.

George Maule, a committee member during LaCoursier’s term, became tournament director in the early 1970s after LaCoursier stepped down.

For the next 20 years, Maule directed the tournament with the help of his 12 sons, with Frank Rodman handling media relations.

When Maule died unexpectedly in 1990, his son Bob, along with close friend Raymond Bray, took over managing the tournament.

The event expanded beyond classes A and B over the years to offer A, B, C, D, E, EE, a junior high division and a women’s division.

Bray and Bob Maule ran the tournament together for nearly 30 years, with Bob’s youngest son, Bryan, getting involved more and more each year.

On March 18, 2019, Bray died of cancer, less than a month before the tournament. Having to jump in, Bob and Bryan Maule took on the task and the 81st edition of the Gold Classic went off without a hitch.

“We had help, but we pulled it off,” Bob Maule said.

“It was quite the ordeal but without people like my sister Elena, Raymond (Bray)’s grandson Zach (Seat), Joey Pontbriand and others, we couldn’t have done it — but not only last year, there’s always people willing to help.”

Bob Maule began hanging around the historic Meyer Township Community Club, where the tournament takes place each year, while still in elementary school.

“I can’t even remember what age I was when I began working the scorer’s table,” he said. “I think I may have been 16 or maybe even 15 when I was forced into refereeing my first game by my dad.”

Bob Maule eventually became a registered Michigan High School Athletic Association official, and has been one for about 40 years.

He recalled as a youth enjoying being at the tournament every day. So when his father died, he knew he wanted to keep it going.

Bryan Maule was born during the tournament in March 1981.

“I was at the hospital with a referee’s shirt on and a whistle around my neck,” Bob Maule said. “I was there for his delivery and after awhile, I left and drove back to Hermansville to get back to the gym for the tournament.”

Bryan remembers at age 9 he and his 13-year-old brother, Robby, helping their father assemble the bleachers, starting about a month before the tournament.

“Sometimes at 5:30 in the morning on a Saturday he’d wake up Robby and I to go set up those horrid bleachers. Then, we’d have approximately two weeks or so after the tournament to take them down and put them away,” Bryan Maule said.

Back then, the Community Club stored the bleachers and all the parts up in the balcony.

“It was awful,” Bryan said. “Take them from upstairs and assemble them, then try putting them back; that was worse yet.”

Now Bryan has an 11-year-old son, Beau, hooked on the atmosphere and everything about the tournament, and is on the tournament committee himself.

Many other people over the years have been constant figures at the tournament, Bryan noted. From the elderly gentlemen who used to attend religiously and all sit together — such as “Wheels” Whitens and Chuck Kelly in their wheelchairs — to Julius Halterman, “Tata” Bal and “Doc” Daniels. All of them except Daniels and Kelly are gone, and those two are no longer are able to attend.

A Hermansville resident in his youth and a permanent resident since 1967, John Bellefeuil lists several great memories from attending more games at the storied tournament than he can count. He and his wife Donna and their family, who own the Wildwood Restaurant and Truck Stop, have sponsored many teams over the years in all classes.

“Some of the teams that came were so good,” Bellefeuil recalls.

Bellefeuil also recalls decades back that local chainsaw and snowmobile salesman Dage Murray of Powers sponsored many of the top teams, as did Leo’s Mobile of Wilson.

Bellefeuil recounted how a Daggett team some time ago kept the crowd amused.

“Their name was Charlie’s Chargers. They had six players … and five pairs of basketball shoes. When the guy on the bench would check in, the guy who was coming out of the game would have to take off his shoes for the sub to be able to come in the game once he put shoes on his feet. It was hilarious.”

Bellefeuil and wife Donna became such a fixture at the tournament each year that in 2019, the Class E Most Valuable Player Award was named for John Bellefeuil.

Long-time participants the Stephenson Strollers — whose founder, Mike Strohl, the namesake for the Class EE MVP award, has since passed away — have entered all 82 years. Longtime Stroller Roger Grinsteiner is the team manager now, making sure the team is entered each year.

Bellefeuil recalls the Strollers’ roster in the 1970s mainly had Michigan State Police officers and other law enforcement. Another long-time tournament participant anyone familiar with the Gold Medal would recall is the McNeil Oilers from Crystal Falls.

The Oilers’ namesake, Malcolm McNeil, at one time was among the top sports promoters in the Midwest.

The Gold Medal Classic is very much about tradition — so much so that the other MVP awards that haven’t been previously mentioned and the special awards all are named after someone who had some type of involvement in the tournament over the years in various ways.

“Our focus is to keep the current atmosphere that the tournament has — of course, there’s always a goal of making the tournament better each year, and that may at times require some tweaking of things,” Bryan Maule said. “We want to bring back former players that still compete at a high level — bringing back that old talent was a goal for this year, but obviously we couldn’t have the tournament.

“So going forward, even though we had to take this year off, I think our turnout next year won’t be affected all that much by it. In fact, it may help us, with people looking forward with that much more excitement to being able to play in the tournament again.”

The second attempt at the 82nd annual Gold Medal Classic will be in the spring of 2021.