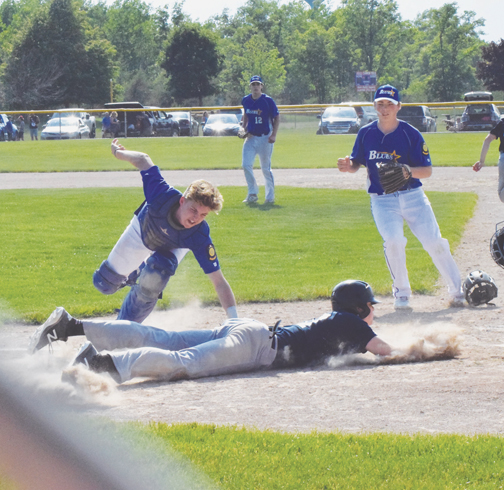 Marquette’s Jakob Peterson, left, tags out a sliding Dayton Bernson of Gladstone before he can reach home plate safely in their Upper Peninsula U-19 Baseball League tournament game played Friday in Gladstone. Looking on for Marquette is Jon Jason. (Escanaba Daily Press photo by Justin St. Ours)

GLADSTONE — The Marquette Blues’ weekend got off to a real bang even without any Fourth of July fireworks on Friday evening at the Upper Peninsula U-19 Baseball League tournament.

With one out in the bottom of the seventh inning and the bases loaded, Superior Central High School senior-to-be Kyle Frusti swung at a 2-1 pitch, hitting a sharp hopper that hit or nearly hit second base for a single to score a pair of runs, erasing a 6-5 deficit and lifting the Marquette squad to a 7-6 walk-off victory and perfect 3-0 record.

In this back-and-forth game, it was the fourth lead change as the Blues had already scored two previous runs in the bottom of the seventh after entering their final times up trailing 6-3.

So the season opener didn’t go quite the way Gladstone hoped, however.

“Kyle did the same thing against Gladstone in a game at Antigo (Wisconsin) last year,” Blues manager Derek Swajanen said. “He told me ‘Remember what happened last year, Coach (about the game-winner at Antigo).’

“The kids are doing a nice job, especially for this being an unusual year (due to the coronavirus). I thought having two games under our belt would help us a little more than it did, although we’re still rusty and young.”

Clayton Smith brought Marquette within 6-4 on single to right and teammate Eli Werner scored another run on a throwing error.

“I think the biggest thing for us is getting on the field and playing a game,” Indians manager Justin Jurek said. “We had a lot of good at-bats overall. Offensively, I think we’re in a good position. I think our pitching will be strong and defensively we’re pretty versatile.

Gladstone trailed 3-2 after four frames, then took advantage of six walks while scoring four times for a 6-3 cushion in the fifth.

Frusti opened the scoring on a throwing error in the third.

The Indians, taking advantage of three walks, gained a 2-1 lead in the fourth.

“We put ourselves in some hard situations early,” Swajanen said. “This is going to be a good bunch once it learns how to play. There’s a lot of talent on this team.”

The teams combined for 20 walks, including 11 issued by Marquette pitchers with five taking place in bases-loaded situations.

Both teams used three pitchers with Eric Johnson getting the win and Ian Schwalbach absorbing the loss.

Frusti and Smith had two hits apiece for the Blues, who finished with five hits altogether.

The Indians were limited to two hits, including a leadoff double to left by Dayton Berson in the fourth. Gladstone’s Zach Hanson opened the contest with a single to right.

The Indians left the bases loaded in the first and fourth and stranded 10 baserunners. The Blues left nine on the basepaths.

Gladstone hosts Menominee and Negaunee today at 1 and 4 p.m., respectively, and Copper Country Sunday at 2 p.m.

Marquette sets up shop today in Wells where it will face Ishpeming at 1 p.m. and Iron Mountain at 4 p.m., then returns to Gladstone to meet Copper Country at 11 a.m. Sunday.

Ishpeming and Negaunee were scheduled to play doubleheaders Friday night, including against each other before Negaunee was to take on Menominee and Ishpeming squaring off against IM.