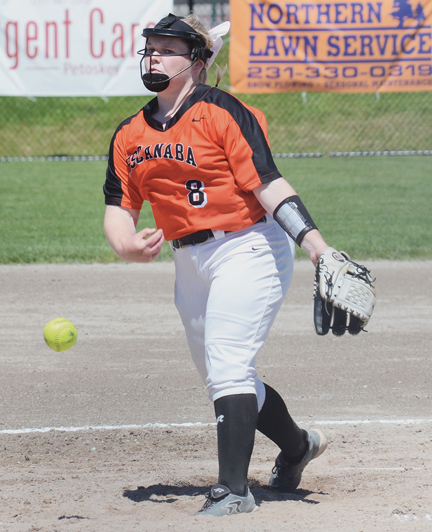 ESCANABA — Gabi Salo will have another award to put up on the shelf alongside the Escanaba High School senior athlete award, the Pfotenhauer-Gessner, she received recently despite the cancellation of spring sports.

Last week, Salo was selected as the 2019-20 Gatorade Michigan Softball Player of the Year — and became the only Eskymos athlete to earn this award. The award recognizes outstanding athletic excellence, high standards of academic achievement and exemplary character demonstrated on and off the field.

That combination is similar to the Pfotenhauer-Gessner award criteria.

The three-time MHSAA Division 2 all-state first teamer helped lead the Eskymos to back-to-back state titles, finishing her 2019 season with a 0.23 earned-run average, 351 strikeouts and nine no-hitters as the team compiled a sterling 26-2 record.

Salo emphasized that the award wasn’t just for her, but for the whole team.

“This definitely is not an individual award,” she said. “You need a team behind you to play. (I want to say) a huge thank you to my parents, my brother, my family and my teammates. I also wanted to thank all my coaches for really pushing me throughout the years.”

The award is a bright spot in an otherwise sour spring and summer season.

“The seniors, you feel for them,” said Gary Salo, Gabi’s father and Esky’s head softball coach. “When they walked off the field for the last time (last season), none of them thought that they wouldn’t be playing again. For Gatorade to step up and just look at the cumulative stats, it just shows that all the hard work that kids put in is still rewarded. It’s nice to see Gatorade recognize someone from the (Upper Peninsula).”

“I think all athletes still deserve to be recognized, and I think — as an athlete — it’s nice to know all your hard work paid off,” she said. “It felt really good (to be selected). It’s the most prestigious award in high school athletics, and it’s really humbling to get such an honor.”

What’s next for Gabi? Well, she’s already got some tournaments lined up in the southern U.S. to keep sharp and practice for her freshman year this fall at the University of Wisconsin in the Big Ten.

“I have a couple tournaments over the summer,” she said. “They’re kind of more in the Kentucky and Tennessee area. This next weekend I get to go out to Louisville, so that’ll be exciting to just get back out on the field.

“I’m ready to get back out on the field and playing again.”