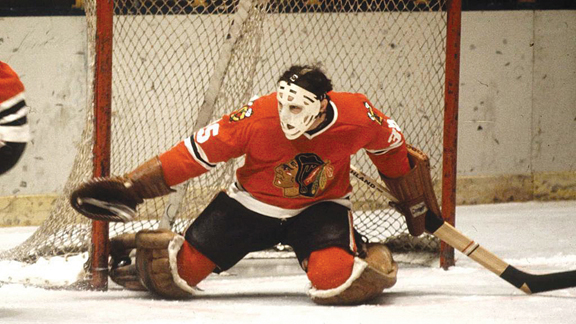 Former Michigan Tech goalie Tony Esposito looks to stop a shot while playing for the Chicago Blackhawks in a 16-year NHL career that ended in 1984. (Photo courtesy NHL.com)

HOUGHTON — Former Michigan Tech goaltender Tony Esposito is on the 2020 Michigan Sports Hall of Fame ballot as one of 10 finalists in the amateur category.

The ballot was unveiled Monday and allows for online fan voting through April 30. The 2020 induction is scheduled for Oct. 2 at MotorCity Casino Hotel in Detroit.

It is believed to be the oldest state sports hall of fame in the United States, having elected its inaugural class in 1955.

The hall induction classes are made up of memorable contributors from multiple sports who have achieved prominence and represented their teams, schools and the state.

The other categories in this year’s voting are professional, coach and media.

Esposito played 51 games for Michigan Tech from 1964-67 and had a 38-10-3 record with a 2.55 goals-against average and .912 saves percentage. He was a three-time first-team All-America selection and helped lead the Huskies to the 1965 NCAA championship, being named a first-team NCAA All-Tournament Team choice.

Esposito was also a three-time All-WCHA first-team selection and inducted as an individual into the Michigan Tech Sports Hall of Fame in 1991 and again with the 1965 national championship team in 2014.

After MTU, Esposito played 15 seasons for the Chicago Blackhawks and holds the NHL team’s record for wins with 418 and shutouts with 74. He was named one of the NHL’s 100 Greatest Players in 2017 and was inducted into the Hockey Hall of Fame in 1988 with his No. 35 jersey retired by the Blackhawks, also in 1988.

He was a three-time Vezina Trophy winner as the league’s top goaltender.

To find the ballot and to vote in the Michigan Sports Hall of Fame, visit online at http://mshof.org/ballot/.