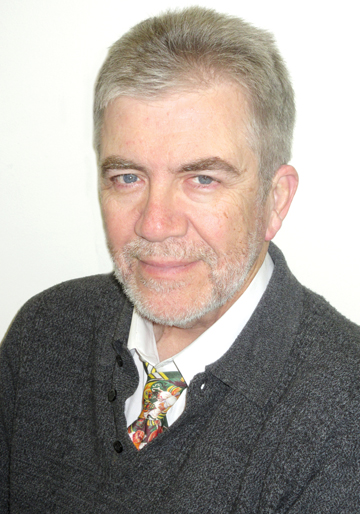 IRON MOUNTAIN — Burt Angeli, a Daily News fixture who covered area athletics for more than four decades, including 35 of those years as sports editor, died Thursday at age 65.

Angeli — whose “ScuttleBu(r)t” column was a must-read for athletes, coaches, fans and dog lovers — had battled cancer for the past year.

An Iron River native and St. Norbert (Wisconsin) College graduate, Angeli came to The Daily News in July 1976, serving as sports editor until 2011, when he took on a larger writing role.

He maintained an arduous work schedule during his 44 years at the newspaper, committed to giving attention to as many local young athletes as possible.

He won numerous awards over the decades from the Michigan Press Association and the state Associated Press, most recently earning first place for Best Sports Feature in the 2019 Michigan AP Media Editors contest. The story was a look back at Florence, Wisconsin, High School’s 1989 state championship boys basketball team.

When Angeli took the sports editor job at The Daily News, coverage of youth athletics mainly was limited to football, basketball, baseball and track. Under his guidance, and as federal Title IX came into play, the list expanded by a dozen more sports.

He kept close contact with coaches and athletic directors from 11 area school districts in both Michigan and Wisconsin, laying a foundation for prep coverage that would span generations. He emphasized stories that went beyond scorekeeping; promoting values of dedication, discipline, fairness and teamwork.

He was colorful, too, unafraid to gently jab Iron Mountain’s favorite sons Tom Izzo and Steve Mariucci, even as they rose to national fame in men’s college basketball and NFL football, respectively.

Angeli is survived by his family — wife Regina, siblings, nieces and nephews — along with his hurting colleagues and readers.

Jim Anderson is the news editor at the Iron Mountain Daily News.