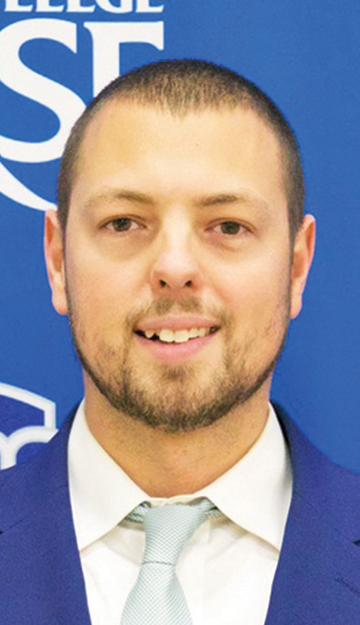 ESCANABA — Matt Johnson has been coaching alongside Matt Gregory for the last three seasons.

The Norse made it official last Friday as Gregory became the third coach in women’s program history.

“I was basically full of excitement and gratitude that Matt and (President) Dr. (Laura) Coleman, as well as Travis Blume — the vice president of student services — decided to go this route,” Gregory said in a phone interview Tuesday. “I’m very fortunate and lucky to step into a role like this.”

Gregory spent the past three seasons as an assistant for the men and just started in that same role for the women last season. When previous head coach Rob Robinson was let go in early February, Gregory finished the season as the interim coach with a 3-2 record.

“Being part of the men’s program was obviously a blessing, to see how coaching at the (junior college) level is,” said Gregory, who played college ball at Wisconsin-Marinette. “Seeing the ins and outs of how the recruiting goes, how you handle certain situations, how you’re dealing with student-athletes and making sure that everything is running smoothly on and off the floor, inside the classroom and in their personal lives, was very helpful.

“Being able to have that relationship with the guys and then the girls this season was definitely a blessing to be able to learn that type of situation.”

Gregory also noted he learned a lot in his five games as the head coach, which ended in a heartbreaking 60-57 home loss to Gogebic Community College in a National Junior College Athletic Association Region 13 tournament opener.

“I learned a lot on the fly when it comes to being that main person on the floor and the adjustments to make and how it can affect everybody on the team,” he said. “Now I have a lot of time to kind of plan and figure out what our identity is going to be.

“I was really pushing hard the culture and the ‘we’ before the ‘me,’ and that’s something I want to continue to keep growing with our team chemistry, and the people that we have coming back are buying into it already.”

The Norse had four area players on its women’s team this winter, sophomores Marissa Ackerman and Kelsea Ackerman of Munising and freshmen Trish McGuire and Brooke Mannor of Gwinn.

For Johnson, the decision to offer the position to Gregory was a no-brainer. It was just a matter of whether or not Gregory wanted the job.

“For us, it was a no-brainer because we had been able to see Matt in action the past three years. I worked with him on a day-to-day basis with the men’s basketball program, but I also watched him throughout this past year as an assistant with the women, and then obviously watching him take over at the end of the year with the women’s side,” Johnson said. “His dedication and commitment to our student-athletes on both teams, and his commitment and dedication to Bay College and our athletic department as a whole, made it a no-brainer.

“He’s been incredibly loyal to us and he’s done a tremendous job, and I think it was just a great opportunity for Matt to be able to walk into.”

The situation he’s walking into isn’t exactly ideal, however, due to the current coronavirus pandemic. There are many challenges in recruiting, along with not knowing when things will return to normal.

However, this hasn’t stopped Gregory on the recruiting trail, as he’s been forced to use new tactics.

“Players are interested in Bay … they’d love to come and see campus,” he said. “I’ve had a lot of people that were very excited to set up campus visits before all of this went down. We’re lucky enough that we’re actually having a virtual campus Bay College tour for the people who can log-in and look at the link and check out our campus and kind of do a walk-through with our admissions director, to kind of go through each area and see what they do and the personnel that’s around, and to really highlight some of the stuff that we have.

When things return to normal and play resumes, expectations will be high. The Norse went 35-17 in Robinson’s two-year tenure after going 14-11 under first-year coach Rae Drake Jr. in 2017-18.