Gwinn varsity football head coach Dion Brown, center, talks to his Modeltowners during a timeout on Aug. 29 in a game against Bark River-Harris at McCormick Field in Gwinn. (Journal file photo by Amy Grigas)

GWINN — The Gwinn Area Community Schools and the greater Forsyth Township community is in mourning after the death of Modeltowners varsity head football coach Dion Brown on Wednesday evening.

The GACS, through Superintendent Sandra Petrovich, released a short statement about the loss.

“He was big in heart, big in spirit and big on the field. Our condolences to his family and our entire community.”

The Forsyth Township Police Department and First Responders were called out to the school at about 9 p.m. Wednesday for a medical emergency after Brown had been found unresponsive by a colleague, according to a police news release. 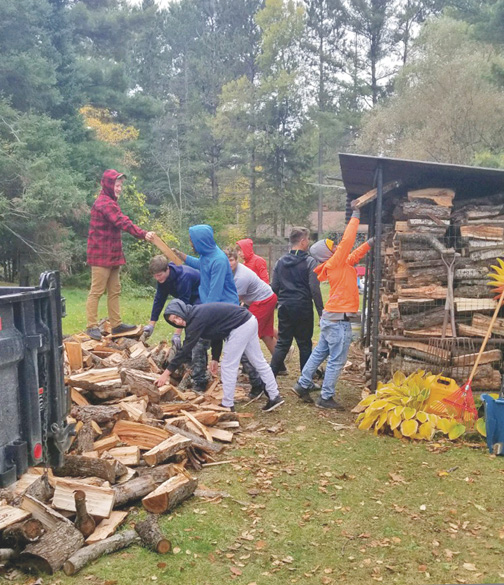 Members of the Gwinn High School football team stack firewood to help a local residents in 2018. The focus of the effort was to give back to their supportive community. (Photo courtesy of Anna Juidici)

In conjunction with Ishpeming Public Schools, the Gwinn at Ishpeming junior varsity and varsity boys basketball games were postponed on Thursday night.

Petrovich said decisions hadn’t been made as of Thursday morning on other Modeltowners varsity games this week, including tonight’s girls basketball games at Calumet and Gwinn’s entry into the Upper Peninsula Championships wrestling tournament scheduled for Marquette all day Saturday.

The next varsity event listed on the Gwinn schedule after that are boys basketball games hosted by the Modeltowners against Gladstone on Tuesday evening. 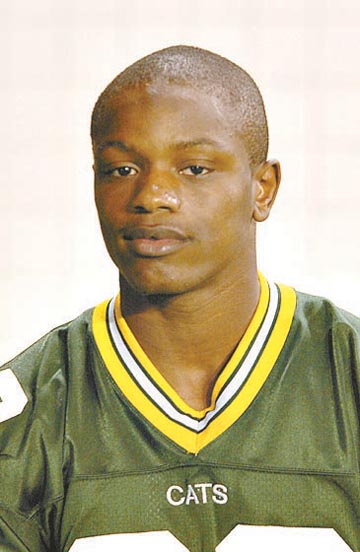 He took over a struggling Gwinn program that nearly had to fold operations during the 2013 due to injuries and a lack of available players.

He had coached the JV team in 2013 after coming from an assistant’s position at Ishpeming High School.

“My job is to change the whole culture around here,” Brown said at the time of his hiring in 2014, “but it’s all up to the kids. If they think they can compete, they will compete.”

“We’re not at that level,” Brown said about perennial contenders like Ishpeming and Negaunee before his first game coaching the Modeltowners. “We’ll try to get better one practice, one game at a time.

“Our goal is to compete every game.”

And while Gwinn only went 1-8 in his first year, losing by less than 20 points in only one game, the Modeltowners showed steady improvement until they made the MHSAA playoffs two years later.

In 2015, Gwinn finished 3-6, then in 2016 completed a 6-3 regular season before a loss at Iron Mountain in the opening round of the MHSAA Division 7 playoffs.

It was Gwinn’s first appearance in the postseason since 1999. And it was only the school’s third berth in the playoffs that began in the mid-1970s.

For that achievement, the Upper Peninsula Sportswriters and Sportscasters Association named Brown its Large Schools Coach of the Year for 2016, while four Gwinn players earned All-U.P. recognition, too.

“When I got to Gwinn, the kids around here didn’t believe,” Brown said at the time of the award. “So I told them that they needed to believe in each other and dedicate themselves to the weight room.

“Last year, when we were down 6-0 to Ishpeming, I told the guys that that team over there will probably win another state title this year, and if you can keep up with them, you can play with anyone.

“So we worked hard every single day and the kids started to believe again.

“I’m just so happy for the kids because they worked so hard and there’s just a positive vibe around us right now. Even when we lose, we bounce back.

“This is a great group of kids that started something here and ended that streak. They put Gwinn back on the map.”

Brown also led GHS to its fourth-ever playoff berth in 2018 after another 6-3 regular season.

Last fall, the Modeltowners ended on a high note with their only win, a 34-7 victory over Munising.

Brown was also known for leading his teams to make a difference in the community.

In one instance, Journal news writer Christie Bleck reported on his organizing members of the team for twice stacking firewood in the fall for area residents.

“We just love doing things for the community like that because they show our support, especially when you’re having a winning season and everything like that,” Brown said then.

“It teaches them life goals as well — do unto others as is done to you.

“Help out. Just appreciate things because these are the same people that come and watch you play football, basketball or track and field and everything else. It’s always good to give back.”

“Dion Brown shows these guys what it means and takes to be a team on and off the field,” said Anna Juidici, the mother of team member Reid Hill.

Gwinn varsity football head coach Dion Brown, center, talks to his Modeltowners during a timeout on Aug. 29 in a game against Bark River-Harris at McCormick Field in Gwinn. (Journal file photo by Amy Grigas)

Members of the Gwinn High School football team stack firewood to help a local residents in 2018. The focus of the effort was to give back to their supportive community. (Photo courtesy of Anna Juidici)

starred in football and track and field at Bloomington (Illinois) High School. He set a school record in 2000 by rushing for 1,992 yards in 11 games, averaging 8 yards per carry and scoring 23 touchdowns, according to an online report from The Pantagraph of Bloomington.

But he went to Harper Junior College and NMU as a standout defensive back before later playing for the Bloomington Extreme indoor football team.

He was the Wildcats’ Most Valuable Defensive Back following the 2003 and 2004 seasons. He also led Northern in kickoff returns those two years, returning a total of 45 kickoffs in that time and averaging just under 20 yards per return.

And he was an All-GLIAC Second Team selection for the ’04 season under head coach Doug Sams.

Honor Credit Union has set up an account to receive donations for Brown’s family. For more information, call 475-4149.