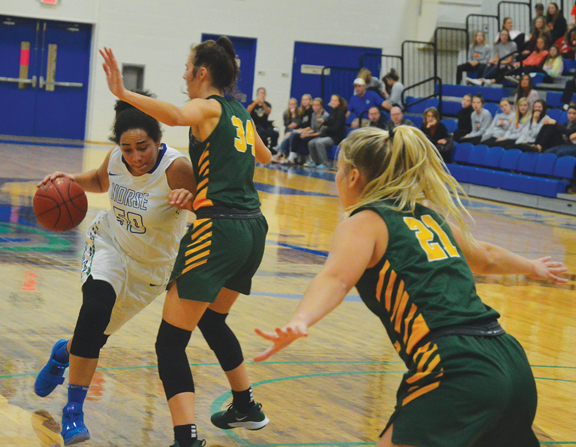 The Norse, a community college team playing against a strong NCAA Division II school, fell behind 28-5 before showing some serious growth the rest of the way in a 74-46 loss.

“I like what we did,” Robinson said. “Obviously, they’re a bigger, faster and pretty strong team. They shoot the ball well … but we were able to get out and see what we needed to see.

“Some people really surprised us, and we got some stuff to work on, but overall I was super happy with what the end result was.”

After being held to just five points in the first quarter, the Norse scored 13 in the second to cut their halftime deficit to 37-18 on a 3-pointer from the left corner by Munising product Marissa Ackerman just before the break.

Bay remained relatively competitive in the second half despite getting outrebounded 37-28 and shooting just 11 for 19 from the free throw line. NMU led 61-30 at the end of the third quarter.

“We didn’t shoot the ball well from the free throw line at all, and our press was nonexistent for most of the game. We settled for being too far back a lot,” Robinson said. “But outside of that, we saw a lot of who was able to step up and do some good stuff.”

The Norse got a strong performance from sophomore Keshia Davis of St. Ignace, who tallied 14 points and four boards.

“The thing with Northern is they’re all big and they all shoot it so well,” Robinson said. “They run their stuff very well, and against a switching team like us they really know how to exploit it. I know they’re going to be good this year, they were great last year and I’m sure they’re not going to have any sort of letdown.”