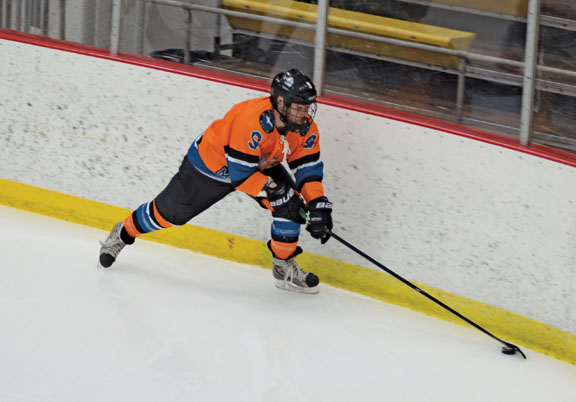 The Marquette Mutineers’ Brandon Smaby works the puck along the board in the Superior Cup consolation game against the Mosinee Papermakers on Saturday at Lakeview Arena in Marquette. (Journal photo by Amy Grigas)

MARQUETTE — The inaugural Superior Cup hockey tournament hosted by the Marquette Mutineers took place over the weekend, with the Mutineers picking up an 8-4 win over the Mosinee, Wisconsin, Papermakers in Saturday’s consolation game at Lakeview Arena.

The tournament, which featured four teams from the Great Lakes Hockey League, kicked off with semifinal contests on Friday night. In the first game, the Mutineers took on the Portage Lake Pioneers, falling in a tight 5-4 battle. The following semifinal featured the Papermakers playing the Calumet Wolverines, with Calumet claiming a 6-3 victory, setting up a date with the Pioneers in Saturday’s championship game.

Unfortunately for the tournament hosts, third place isn’t what the Mutineers envisioned going into the weekend, but team captain and player-coach Joey Enright said it was satisfying to pick up a win in front of the home crowd, as it was the only chance to cheer on the team at Lakeview until December.

“It was much needed,” he said. “Last night was a hard loss, so the only thing we could do was win today to try and make up for (Friday). We felt like we deserved to win on Friday, we just couldn’t get the breaks. It was nice to get a win.”

Marquette received two goals from Neeco Belanger in Friday’s contest, as well as a goal apiece from Ryan Schmeltzer and Ryan Sullivan, but the Mutineers were simply unable to crawl out of an early deficit with the Pioneers taking a 3-1 lead after one period.

The Mutineers pulled within one three times, but after Sullivan’s goal with 1:25 remaining in the third made it 5-4, they were unable to find the late equalizer.

Saturday’s consolation had many more bright spots for Maruqette, which held a 2-1 lead after one period on goals from Belanger and Bob Erspamer. Belanger’s strike was a tic-tac-toe play which came on the power play at the 10:20 mark, with assists coming from John Aho and Wolff Belanger.

The Papermakers tied the game less than three minutes later on a rebound shot from Jake Kadlecek which was assisted by Greg Hanson to make it 1-1.

Erspamer’s goal came with 3:03 remaining in the first on assists from Jordon Truxton and Cody Bourdeau. Shots were 12-8 in favor of the Mutineers after one.

A penalty-ridded second period also featured a big offensive showing, with eight goals scored in the frame, six coming from the Mutineers. Five of Marquette’s goals were consecutive, scored by Aho, Wolff Belanger, Schmeltzer, Mike Peterson and Rich Ledy to give the Mutineers an 8-2 lead.

Mosinee’s two goal scorers in the frame were Omar Mullan and Owen Ahlstrom. Marquette outshot the Papermakers 16-14 for a 28-22 edge through two periods. The score was 8-3 after two.

Mosinee added one more tally in the third, a goal from Mitch Dye which was assisted by Mitch Filipiak and Nick Bush, but the Mutineers cruised from there.

Wolff Belanger led the way on the stat sheet for the Mutineers with a four-point night, recording one goal and three assists. Aho and Ledy also had three-point evenings, each recording a goal and two assists.

Marquette had three power play goals to Mosinee’s one.

In the championship game, Portage Lake scored on the power play in overtime to defeat Calumet 6-5. Reid Pietila notched the game-winner with 58 seconds remaining to claim the first Superior Cup title. Shots were 44-25 in favor of Calumet in the title game.

The Mutineers resume Great Lakes Hockey League play this weekend, hitting the road in Wisconsin to take on the Fond du Lac Bears on Friday and the West Bend Bombers on Saturday.

The team’s next home game isn’t until Dec. 20 vs. Mosinee once again.

Although the team will be away from Lakeview for quite some time, Enright encourages fans to come out and support the program, which is in its third year of existence.