Get in the groove

Redettes finish with a flourish to win GNC?tourney in volleyball 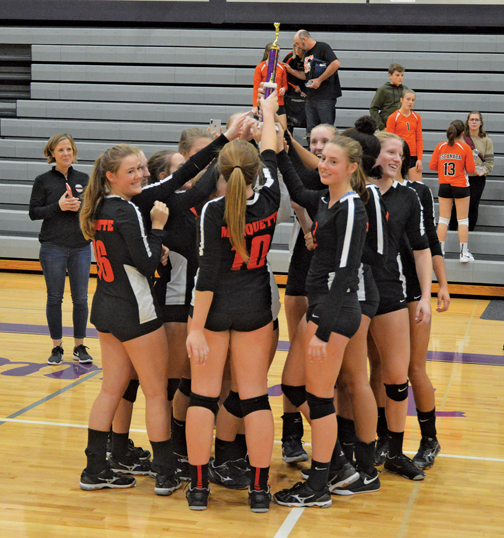 GLADSTONE — The Marquette Redettes volleyball team continued its stranglehold on the Great Northern Conference here Saturday, capturing the GNC tournament with a 25-18, 25-23 win over Escanaba in the championship match.

The Redettes (32-2-3), who have yet to drop a conference game this season, were tested early and often by Escanaba before taking the title.

The first set was tied 9-9 before the Redettes started to create a little separation. Tellena Nystrom served an ace and powerful outside hitter Seiler Hruska came up with a kill to make it 13-10. The Eskymos responded to pull within 16-14 on a block-kill by middle hitter Nicole Kamin, but Marquette pulled away for good after a three-point service run by Maria Millado stretched its advantage to 22-15.

“We have a lot of ‘pin’ hitters. We have one left position and right position, and we switch in and out a lot,” Redettes coach Ann Crandell-Williams said. “We just kind of went through the day and looked at who was performing the best.

“By the end of they day, we ended up settling on two players who were playing the strongest, which ended up being Tellena Nystrom on the left and Emily Gooch on the right. Those are the two positions that will probably end up being in the air every game until the end of the season, and they came in and did a really nice job.” 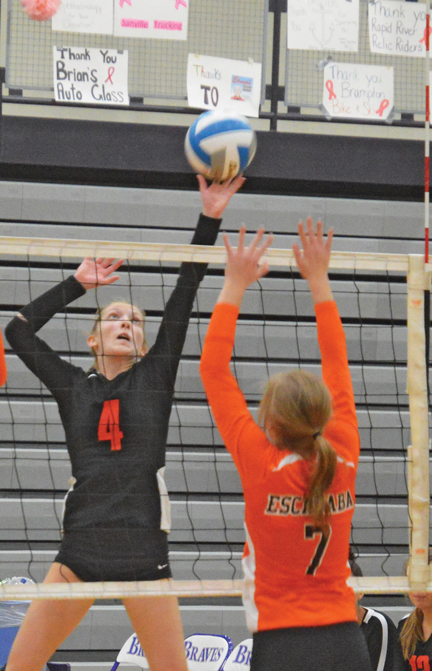 Escanaba was even more competitive in the second set, tying the score at 10 on a kill by Taylor Ray. After an ace by Maiya King put the Redettes up 14-13, Esky reeled off three straight points to force Marquette into a timeout.

“(Escanaba) is playing very, very well,” Crandell-Williams said. “They played amazing defense. Their libero (Jalin Olson) was phenomenal and digging everything we put down on them, so they had a great day. I give them a ton of credit.”

Escanaba temporarily held onto its lead before Marquette tied it at 19 on a kill by Hruska. Two points later, Aspen Michelin came up with a tip-kill to give the Redettes a 21-20 lead. Esky stayed within a point the rest of the way until Hruska finished the set at 25-23 with another powerful kill that just grazed the back boundary line.

“We just need a little more discipline,” Esky coach Adam Lambert said. “Some calls didn’t go our way that I thought should have. I’m not blaming the refs at all but there’s some momentum changes there … but we made some errors. If we’re going to beat a team like Marquette, we have to clean up the errors. We lost probably four points in that last set that were just our errors. We can’t do that against a team like Marquette.”

Esky topped Kingsford 2-0 in the semifinals and Marquette blanked Menominee 2-0. Gladstone was eliminated before bracket play after finishing last in pool play.

“At the beginning of the day we were a bit slow to get in the groove, and we weren’t covering the floor as well as we can, but that improved as the day went on,” Crandell-Williams said about her Redettes. “We served consistently, kept swinging and pushed through several tight games.”

She was also impressed with each of the other teams.

“Today made me feel good about the conference as a whole, just because I thought the quality of play today was really good,” she said. “I think sometimes with these long school days where we travel somewhere and they travel to us, the games don’t feel as intense and as close, but today everybody was here to play.

“They came out and they played hard, and the games were close. Everybody pushed each other, and it was just good volleyball. That’s what makes it an honor to win.”

The Eskymos opened the day with a 25-20 win over Marquette in pool play — the first time the Redettes lost a set in 41 tries.

“We came to the GNC tournament knowing that we still have Marquette and Kingsford left to play in the regular season, so we used this as a training opportunity and my girls came out ready to play,” Lambert said. “We split with Kingsford this morning and then we took them in the semifinals, and then we went toe-to-toe with Marquette. We were leading, trailing and then leading, and Marquette is the best team around.

“To keep up with them was amazing for us, and it was a good victory for us this morning. Our girls were excited and they played intense, and we’re ready for them when they come in Oct. 29. We look forward to that.”