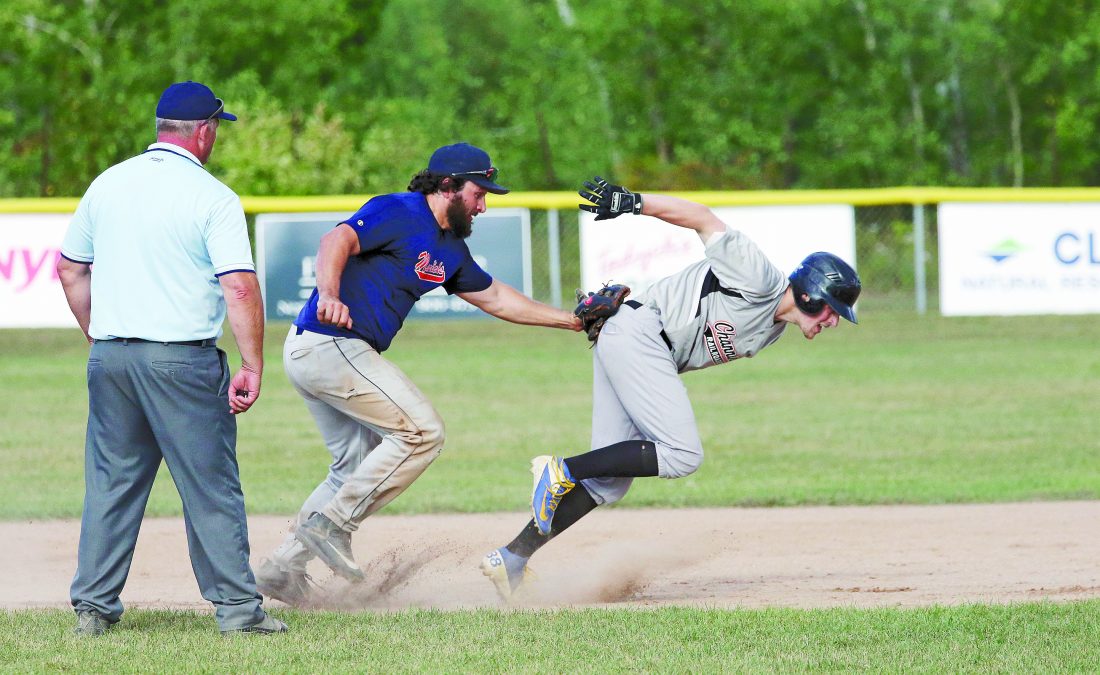 Channing's Connor Berndt, right, is tagged out by the Marquette County Mavericks' CJ Lepisto while getting caught off first base in the top of the sixth inning in the Superiorland Baseball League's playoff championship game at the Negaunee Irontown Field on Saturday, Aug. 17, 2019. (Photo courtesy Daryl T. Jarvinen)

MARQUETTE — For the third time the champions of two Upper Peninsula adult baseball leagues will meet for the U.P. Baseball Championship this weekend outside Houghton.

The Marquette County Mavericks of the Superiorland Baseball League square off against State Farm-Dean Kangas of the Copper Country-based Twilight League at 3 p.m. Saturday at the Stanton Ball Park in Liminga, above five to six miles west of Houghton. The game is scheduled for nine innings.

The Mavericks, 11-0 this season, have represented the Superiorland loop all three years in the U.P. finals after that team won the playoff championship each August. This will be State Farm’s first appearance in this game.

The Mavs have split in their two previous appearances, each played against Superior National Bank-Stanton, losing 3-2 in 2017 and winning 10-1 last year.

The Mavericks, a Marquette County-based team as its name suggests, have players ranging in age from 19 to 43 that include former American Legion players from the Marquette, Ishpeming and Negaunee teams; Finlandia University players; and ex-Tri-City Northstars players of the defunct Wishigan League.

“We are thrilled to be stepping out on the ballfield one final time this year with a bunch of guys who truly love the game on both sides of the diamond,” Mavericks player-manager James Larsen II said.

State Farm-Dean Kangas rode a late-season hot streak after knocking off SNB-Stanton in the opening round of their league playoffs and regular season champion REL Inc.-Mohawk Technology in the finals. Both were sweeps of best-of-three series.

The Superiorland Baseball League has featured teams based in Marquette and Dickinson counties in its three years of existence. It is actively seeking players for the 2020 season.

For more information or to indicate interest, email Zac Sorelle at sorelle33@hotmail.com or call him at 906-458-5579. The league also maintains an active Facebook page and can be contacted online there as well.