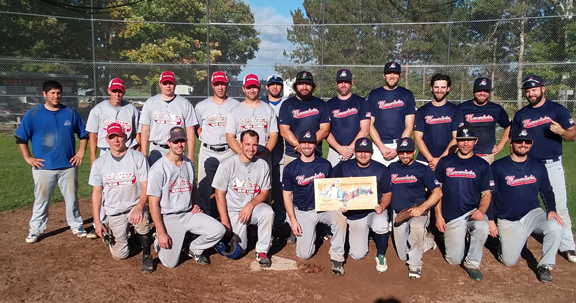 LIMINGA — Steve Hintsala and Riley Lynch combined on the mound to lead the Marquette County Mavericks to an 8-2 victory over State Farm-Dean Kangas and the Upper Peninsula Baseball Championship on Saturday afternoon.

In this matchup of the playoff champions from the Superiorland Baseball and Twilight leagues, the Mavericks defended their title in their third straight appearance in this game that was marking its third year.

“We are grateful to the pioneers who came ahead of us blazing a path to play baseball in the Upper Peninsula,” Mavericks player-manager James Larsen II said. “Playing at Stanton ballpark, we think about (the late) Leo Durocher and all he did for baseball in the Copper Country area.

“In our area (Marquette County), we fondly reflect on (the late) Dave Speaker Sr. starting adult hardball. We are thankful to follow in those steps, providing opportunity for people to continue to pursue the game they love.”

The Mavs won the Superiorland regular season and playoff championships and finished at 12-0 for the season. State Farm took the title in the Twilight League, based in the Copper Country, as its league hosts the U.P. Championship game at a field about five or six miles west of Houghton.

Hintsala started and went three innings for the Mavs, allowing a two-run homer to State Farm’s Luke Paul over the right-field fence in the third inning. Paul, his team’s starting pitcher, also sent home Brian Juopperi after he reached on an error.

The starters’ mound appearances included a rain delay of about 10 minutes in the second inning.

Lynch got the pitching victory, throwing for the final six innings of this nine-inning game, not allowing a run as he stranded baserunners in every inning he worked.

Jake Spear led Mavs’ hitters, going 3 for 4 with three RBIs, a run scored and a walk, while teammate Aaron “Goose” Adriano was 3 for 5 with two runs scored.

Paul was 1 for 2 with his two-run homer as he drew three walks.

“It was a great team effort,” Spear said. “We persevered through not having played a game in over a month, and then the short rain delay. Steve and Riley were excellent on the mound and we had contributions throughout the entire lineup after a slow start.”

Marquette County opened the scoring with two runs in the top of the second. Sam Prentice walked, moved to second on an Adriano singled, stole third and scored on a Brad Jalonen sacrifice fly. Adriano, who had moved up on a wild pitch, scored on Spear’s two-out single.

After State Farm tied it 2-2 in the bottom of third, the Mavs took the lead for good with a run in the fifth. With two out, Lynch singled and scored on a Hintsala double.

The visitors added insurance in the sixth and seventh. In the sixth, Jalonen doubled and scored on Spear’s triple to right center. Spear came home on a Ryan Hanson single to make it 5-2.

The Mavs added their final three runs in the seventh. The bases were loaded following walks to Lynch and Hintsala and a single by Adriano. Those three runners came home one at a time on a Jalonen sacrifice fly and two-out singles by pinch hitter Jeremy Rae and by Spear.

The Superiorland league, an adult wood-bat baseball league with teams based in Marquette and Dickinson counties, plays from June to August, usually one game a week. Those interested in joining for 2020 as an individual or team can email Zac Sorelle at sorelle33@hotmail.com or call him at 906-458-5579. The league also has an active Facebook page.