Homecoming of sorts for Redmen when they visit Escanaba 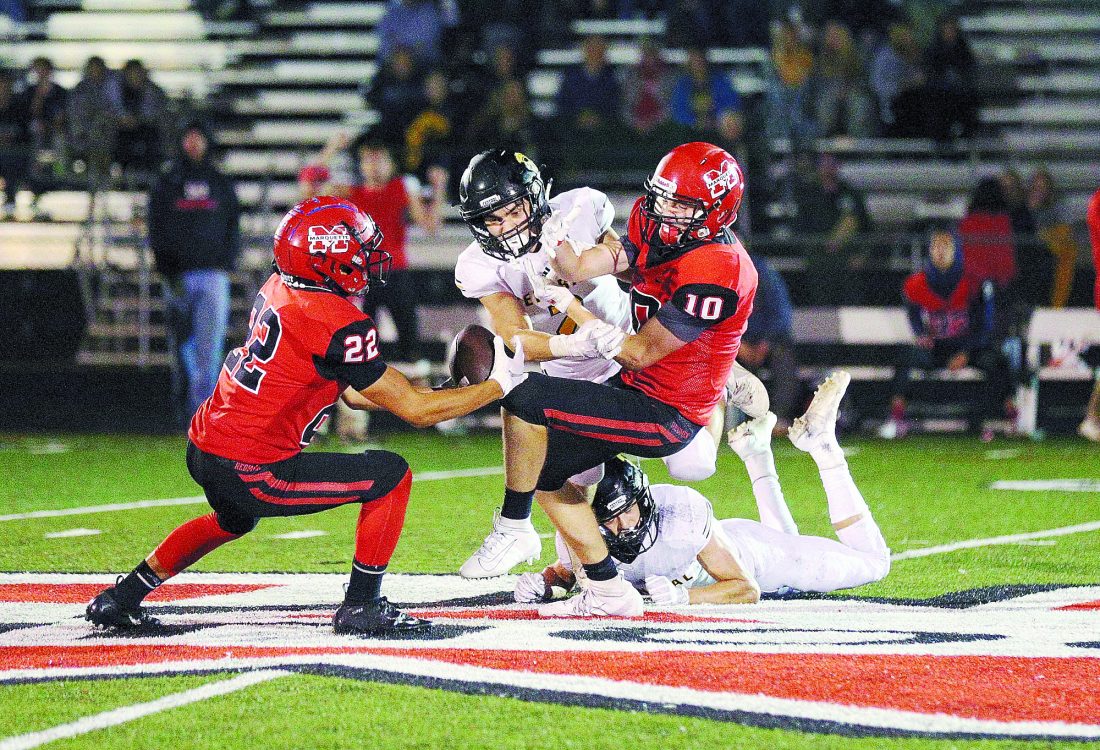 Marquette's Desmond Mullen, left, grabs the ball for an interception after the other three players pictured were first involved in the play during a high school football game against Traverse City Central played at Marquette Senior High School on Friday, Sept. 6, 2019. The pass was initially thrown to TCC's Trey Searles, bottom right, with the ball deflected by the Redmen's Ty Lotterman, top right, and hauled in. But Lotterman was hit by the Trojans' Mitchell Stachnik to dislodge the ball before it was caught by Mullen. (Photo courtesy Daryl T. Jarvinen)

That will be the story at 7 p.m. today when Escanaba welcomes Marquette for its Great Northern Conference opener and annual homecoming football game.

Eric Mason, a native of Escanaba and a former captain on the Escanaba football team, is in his first season as head coach for the Redmen. Mason picked up his first varsity win last week when the Redmen blanked Sault Ste. Marie 31-0.

Mason won’t be the only familiar face on the opposing sideline Friday night as former Esky head coach Dan Flynn is on Mason’s staff as an assistant.

The Redmen will provide an interesting challenge for the Eskymos, who are ranked No. 1 in the U.P. Large Schools division and No. 3 in the state in Division 4 after starting the season 3-0 with double-digit victories over Alpena, Petoskey and Sault Ste. Marie, Ontario, Korah.

The Redmen dropped their first two games to a couple of tough Traverse City schools, so Howes isn’t putting much stock into their 1-2 record.

“Watching them on film, it’s kind of like looking in the mirror,” Howes said. “They have a very fast quarterback (sophomore Austin Ridl) and they’re tough on defense. We know we have our hands full. Their record is deceiving — they have a very nice team there. They’re very scary on paper.”

Howes acknowledged there is a different vibe this week with homecoming week and getting ready to play a conference game against one of just two teams to beat Esky during the regular season last year.

“We go week by week and game by game, but playing our first U.P. team and Great Northern Conference opponent means a little bit more. We played the two downstate teams and the Canandian team, but we’re ready to play our first U.P. football,” Howes said. “There’s a different vibe. The kids are focused and they know the task at hand. When it comes time to play, they’re going to be mentally focused and ready to go.

“The energy is quite a bit higher. Playing at home on homecoming, we want to protect our home field. If we take care of our home field, everything else should work out just fine.”