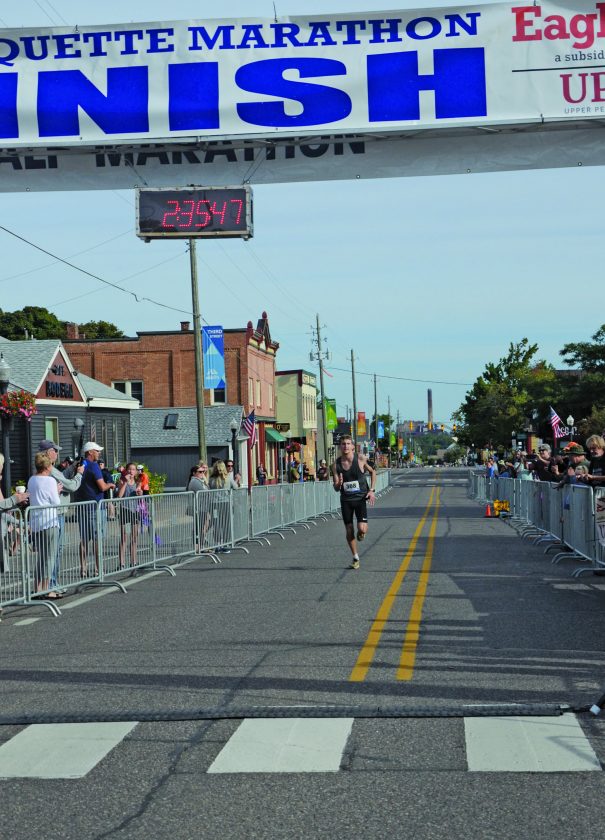 MARQUETTE — The men’s and women’s winners of the longest 26.2-mile event at the Marquette Marathon made sure no timing issues would keep them from the top spot on Saturday morning.

Samuel Parlette of downstate White Lake and Tiffany Kari of Duluth, Minnesota, each won their gender titles by close to 10 minutes in the full marathon when they came to the finish line along North Third Street in Marquette. They had started their runs in Ishpeming.

There were 139 entrants and 137 finishers in the men’s full marathon, with 101 entries and 96 finishers for the women. The half-marathon featured even more participants, 301 women and 173 men, while the Blackrocks 5-kilometer race had 108 women and 89 men.

Parlette finished the marathon in 2 hours, 35 minutes and 50.6 seconds, just over 13 minutes ahead of runner-up Mike Digirolamo of Knoxville, Tennessee, who clocked 2:48:59.3.

All times are listed as the “gun time” on the Superior Timing website at www.superiortiming.com.

In fact, the top four men came from four states, with third-place Kyle Brooks hailing from Kent, Ohio, and finishing just three seconds after Digirolamo, clocking 2:49:02.4. Fourth-place Zachary Carr of Milton, Wisconsin, was also right on their tails, coming in exactly two seconds after Brooks in 2:49:04.4.

In the women’s race, Kari crossed in 3:05:17.6, not quite nine minutes ahead of runner-up Andrea Herbert of Osseo, Minnesota, in 3:14:12.4. The women’s top 10 was spread out, with just two runners finishing within a minute of each other.

Here are some other U.P. finishers in the top 70 — in the men’s race, Kevin Nevorski of Houghton was 29th, John Bauman of Escanaba 30th, Bob Tervonen of Ironwood 51st, David Ward of Marquette 57th, Greg Kretovic of Skandia 61st, Tom Gillman of Marquette 64th, William Shapton of Hubbell 67th and Tony Jurecic of Marquette 70th.

Alexander Dennis of Marquette won the men’s title in the half-marathon in 1:17:26.4, just over two minutes ahead of runner-up Joey Heinrichs of New Berlin, Wisconsin, in 1:19:30.6. Chris Bryson of Knoxville, Tennessee, was third in 1:20:12.2 with Craig Stevenson of downstate Rockford fourth in 1:20:46.5.

This race began in Negaunee with a finish line also along North Third Street in Marquette.

Also cracking the top 10 was Alex Tiseo of Marquette, the Marquette Senior High School athletic director, who placed sixth overall and tops in the 30-39 age group, in 1:23:29.6. Andrew Kangas of Norway was right behind him in seventh in 1:24:16.3.

Amber Huebner beat out fellow Marquette resident Cheryne Clements by barely two seconds for the Blackrocks women’s title, 22:06.8 to 22:09.1. Anna Bauers of downstate Belmont was third in 22:23.2 on a course located entirely within Marquette.

Joseph Guenther of Shawano, Wisconsin, was third in 19:25.5 with Ahmed Elnoshokaty of Marquette fourth in 20:16.6.