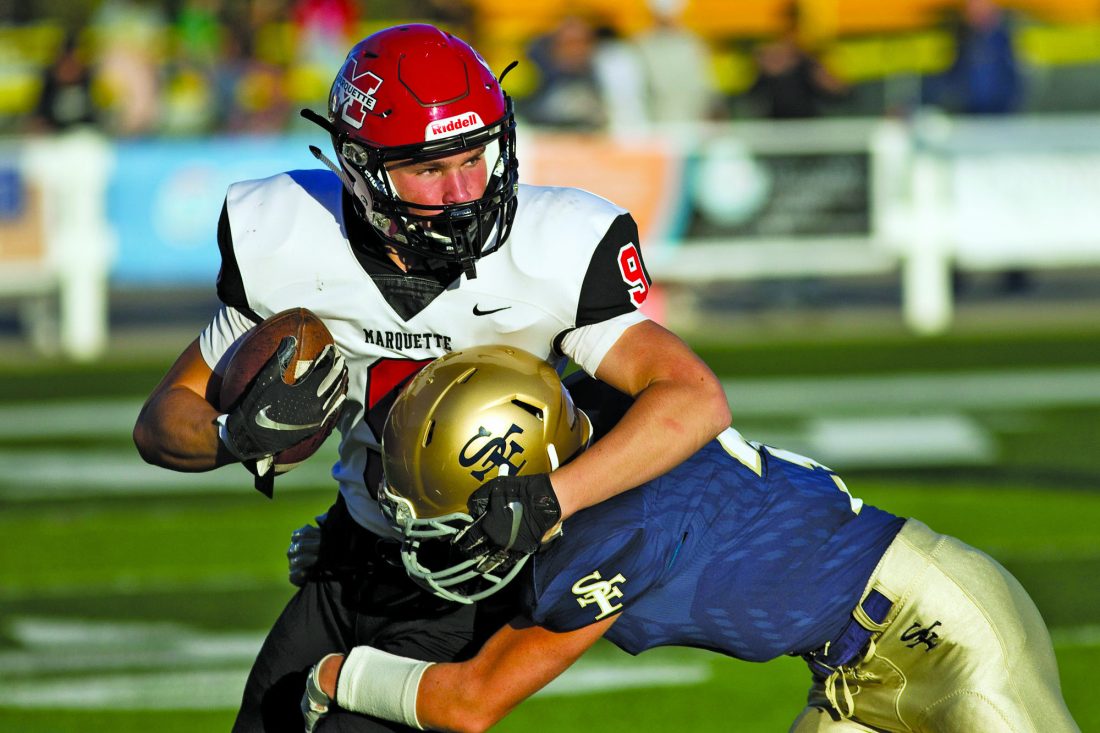 TRAVERSE CITY — Marquette may have lost a football game, but the Redmen found themselves a quarterback.

The Gladiators won 31-17 in Friday’s season opener for both team at Traverse City’s Thirlby Field.

“He grew up a lot today and I can’t be I can’t fault him at all,” first-year Redmen coach Eric Mason said. “He he did what he had to do and he grew up a ton. These reads his mental part of the game were the most impressive. I mean, he made some nice throws. He managed the game and his reads defensive reads where were great.”

Ridl completed 23 of 39 passes for 294 yards in the sophomore’s first varsity start.

So the Redmen did the only other thing they could: Start throwing.

“The word we kept using to describe them as they are accurate,” St. Francis head coach Josh Sellers said. “You know, they didn’t throw a deep, deep ball, but they threw a good deep ball. And with the receivers in the size and the height that they have, we’re not exactly huge in the defensive backfield. So we thought we brought a lot of heat without manufacturing a lot of heat. And that helped us in coverage a little bit.”

“I was really concerned watching that their scrimmage tape as far as their running game, because he that running back is big, strong, fast, tough,” Sellers said of Marquette’s Brady Wright. “And to shut that down early, I think was was really big for us, so we can kind of sit back on the pass a little bit more.”

The Gladiators (1-0) led 14-0 early in the second quarter and scored on their first three possessions.

“Our line played a disciplined and our (middle linebacker) Andy Simaz, he played really well,” St. Francis running back Aiden Schmuckal said. “He put his nose to the football and made a lot of good tackles.”

Owen Mueller ran one in from 9 yards out and Andrew Bliss added the extra point for an early TCSF 7-0 lead on an 11-play drive aided by four Marquette penalties, including three for being offsides.

“We just can’t continue to make these mental mistakes, penalties,” Mason said. “Just shooting ourselves in the foot half the time and against these good teams you’re just not going to overcome it. So, hopefully next week we get some of this stuff shored up. I was expecting the first game to be kind of hectic, and we told them that it’s going to be hectic, but they settled down and they came out they played hard and I cannot fault their effort.”

Schmuckal made it 14-0 with a 3-yard TD run, backing his way in on a second effort to break the plane to end another 11-play possession.

Marquette kicked up its pass game, completing a 48-yard pass to Wyble that ended with a 19-yard field goal by Wyble. St. Francis answered with a field goal of its own, a 24-yarder by Bliss for a 17-3 lead after Schmuckal’s great 45-yard run, stepping on a Marquette defender to stay in bounds as he tightroped the sideline.

The Redmen responded with an eight-play drive that featured six throws, including a TD pass from Ridl to Hicks, as Hicks did a tremendous job of keeping his toes in the endzone on a pass that otherwise would have gone out of bounds.

“He was putting the putting the ball right on the money almost every time,” Endres said. “I was like, ‘Well, that’s good coverage, but he made a good play.'”

TCSF had 4th-and-3 at its own 36 with under a minute left and Marquette didn’t call a timeout to force a punt, instead letting the clock run out.

St. Francis put together another long, grinding scoring drive in the third quarter, going 60 yards on 12 plays for Schmuckal’s second TD from 2 yards out.

Marquette, which has posted back-to-back 4-5 seasons after starting with a loss to St. Francis, went 70 yards on eight plays – all passes – in the fourth quarter, culminated by a 24-yard strike to Hicks.