Pitching in a new Frontier 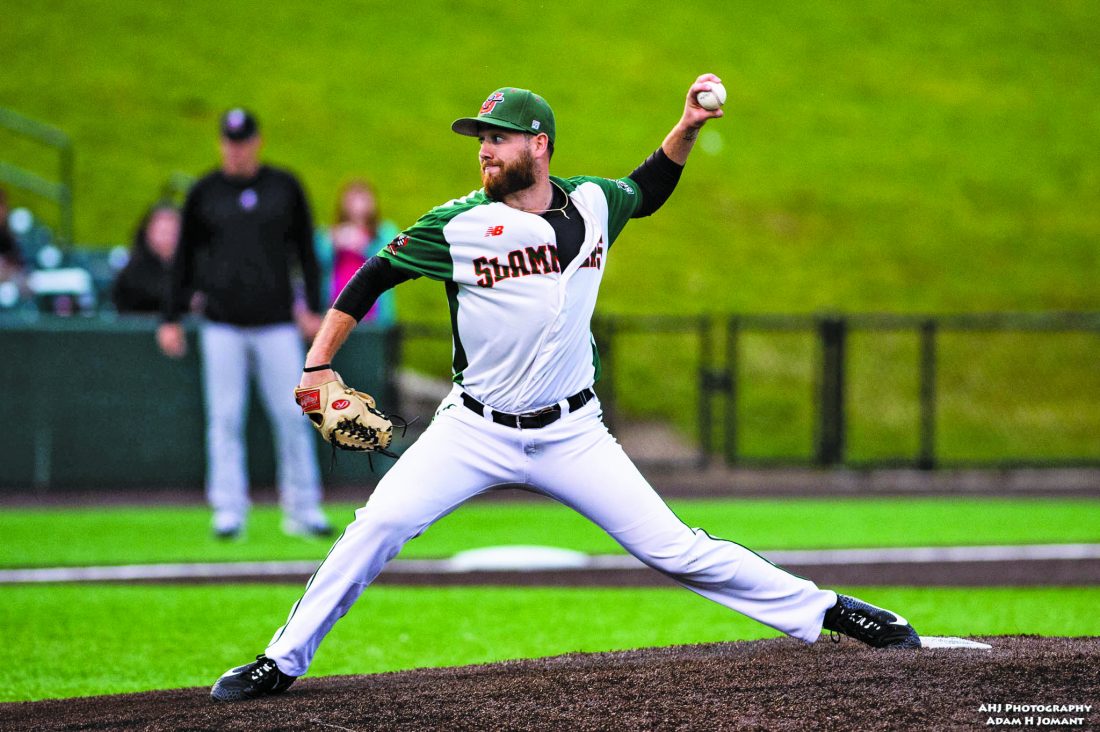 Negaunee High School alum Tyler Jandron pitches for the Joliet Slammers of the Frontier League in a game against the River City Rascals (Mo.) on June 21 in Joliet, Ill. (Photos courtesy of Adam Jomant and Joliet Slammers)

JOLIET, Ill. — Change can be a common thing for a minor league baseball player.

In a matter of hours, you can either be promoted to a higher level, released by your team or traded to another.

For Negaunee native Tyler Jandron, change came in more than one way. After a strong college career downstate at Northwood, Jandron signed a free agent contract with the Arizona Diamondbacks last summer. He spent some time with the Diamondbacks’ Rookie Advanced level team in Missoula, Montana and things started off even better earlier this year when he spent a couple weeks down at spring training, but changes had already started to happen in Missoula.

“In Missoula, they dropped me down to sidearm and they were working on me to try to be like a sidearm pitcher,” he said in a phone interview earlier this week. “So I struggled all Rookie ball season with the Osprey. Obviously, it was a big learning change and the Osprey took pride in having me try to master that and master what they wanted me to be. So I ended up going to spring training and I actually looked pretty good. My velocity went up, my pitches were a lot better and I had a lot more command. That was my biggest problem when I was in Missoula, but my command was much better. I ended up throwing about three bullpens and they were actually pretty impressed about how I looked and how far I came. I threw one outing and went one inning and pitched really well.

“Honestly, the next day, I walked in and it turned out all my stuff was gone (he was released on March 14). I was definitely pretty surprised, especially after having a good outing and I was kind of shook about it. I think they had their minds made up. I obviously struggled with Missoula and there’s a lot of people that are in the organization. They didn’t have money invested in me or any time invested in me, so it’s understandable. But right now, I’m taking it as a good route. Now I get to be a starter again and kind of just be who I am.”

Getting released by the Osprey might have been a blow, but Jandron bounced back quickly as he’s now pitching in the independent Frontier League with the Joliet (Illinois) Slammers.

“Literally that day I got released, I think I had about three or four independent ball teams that reached out to me and asked if I wanted to sign and all that,” he said. “Joliet just stood out to me with the location and it had a host family that I knew that was around the area. They were just coming off a winning season and a championship season. It just seemed right for me, signing with Joliet. It pretty much worked out like that.”

Switching leagues was also a change for Jandron. What some people might not know is that leagues like the Frontier aren’t affiliated with any Major League Baseball franchises. The teams are based in medium-sized cities or smaller-sized towns, but it’s full of quality players that are still trying to climb their way up to the majors.

“It’s still pro ball and that’s what people don’t quite understand,” he said. “You’re not affiliated and you’re still getting paid not much. but you’re getting a jersey on your back and you get to play a sport that you love. I can’t complain about it and I’m still going to work hard to make it up. You have guys in the league that made it up to Triple A or Double A or whatever it was. It’s a competitive league, you can’t say that it’s not.”

Jandron also has an advantage over other pitchers in the league after developing his game as a sidearm pitcher and he says he uses that often.

“I kind of utilize both,” he said. “Obviously, I’ve mastered it and I got pretty good at it and now, I utilize both. If I’m trying to throw a guy off of his toes, I might drop down to that sidearm slot and make some pitches from there. Especially after last season, it’s been a pretty big advantage to have with those guys.

“I’m 4-4 and our team is kind of struggling lately, but I’ve just been trying to really just keep our team in the loop and trying to make it so we still have a chance to win. I wish my ERA was a little bit down, but the strikeouts are there, which is a plus. There’s still a lot of things I’ve got to work on, but overall, it’s not horrible.”

One final thing that has changed is that Jandron is back to his old self and is enjoying his time back out on the mound again.

“I get to play baseball for a living and get to meet a lot of teammates and good people,” he said. “I’m having fun again. When I went out to Missoula, I just felt all season long the pressure to be something that I wasn’t. Trying to be perfect every game and trying to do things out of the ordinary. Here, playing in Joliet, I’m enjoying the game. That was the big thing. When I was coming off of spring training and in Missoula, I think I kind of lost that love for it and the enjoyment of the game. I was always putting pressure on myself because I had 100 guys underneath me trying to steal my spot. You don’t understand that as a rookie sometimes, but I’m getting older, I’m understanding the game a little bit more. You just can’t go out there and really just press. You’ve got to have fun with it and once that ball leaves your hand, it’s out of your control. You prepare the way you can prepare and if that week you pitch badly, well then, you’ve got next week to attack and have a better outing. There’s going to be ups and downs, but I’m absolutely enjoying myself.”

If there’s something that hasn’t changed, it’s that the Upper Peninsula still supports Jandron as he continues his quest to the majors. He even said the Negaunee Little League put up a poster on the fence supporting him and he says all of that encouragement means a lot to him.

When asked if there was anything that he wanted people to know about how he’s performing, Jandron kept his answer simple.

“Things are going good,” he said. “Hopefully, there’s a lot more work to be done and hopefully, I can continue to keep playing and keep this journey going.”

Changes are common with minor leaguers and that’s definitely been the case for Jandron, but after what he’s went through so far, he’s shown that he can handle it.