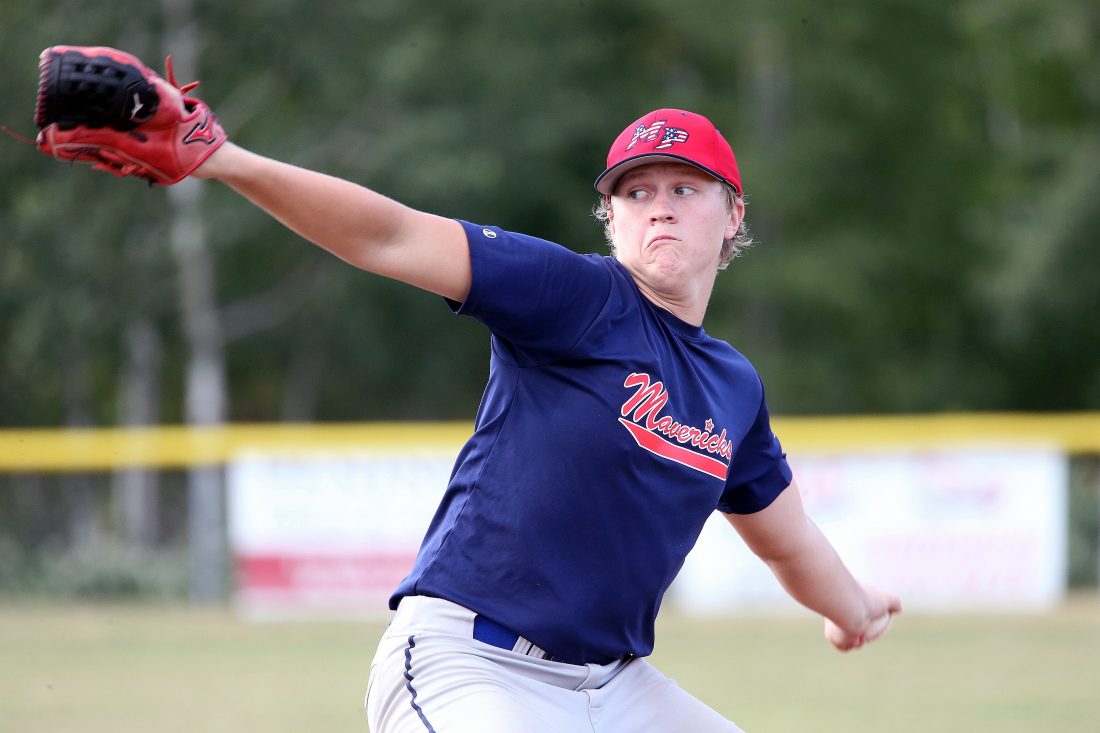 NEGAUNEE — Most sports are games of inches. And baseball is no exception.

One wrong move can cost a team a game, and a wrong move is what cost the Channing Railroaders on Saturday evening.

A fifth-inning error on an overthrow at third base allowed Jake Spear to score the go-ahead, and eventual game-winning run for the Marquette County Mavericks, who earned a 3-1 win over the Railroaders in the Superiorland Baseball League playoff championship game played at Irontown Field.

The Mavericks capped an undefeated season with an impressive 11-0 record, claiming their third title in the three seasons of the league’s existence, all three wins coming over Channing.

With the short history of the league and each of its three title games coming down to the Mavericks and Railroaders, you could say that the series has turned into a friendly rivalry, something Mavericks player Sam Prentice touched on in the post-game celebration.

A friendly rivalry at best. Mavericks player-manager James Larsen II made sure the Railroaders got their due diligence for a hard-fought championship bout.

“Hats off to Channing,” he said. “They’re great competitors and it was a solid, close championship game.”

Perhaps the highlight of the contest was on the mound, with the battle between starting pitchers Jacob Adriano and Kyle Sexton.

Both went the distance, and Adriano was impressive for the Mavericks, allowing just one run on five hits, striking out seven and walking one.

“It feels pretty good,” Adriano said. “I started off pretty well and just pushed through.”

Adriano’s performance was nearly matched by Sexton, who has been an ace for the Railroaders all season. Sexton allowed three runs on just four hits, walking three and fanning three.

Offense was scarce, and while the two teams have played some low-scoring games against each other during the season, perhaps the lack of runs was due to each team pounding out 13 runs in their semifinal games earlier in the day.

The No. 2-seeded Railroaders earned a 13-5 win over No. 3 Coldwell Banker-Craig Heinonen in the first semifinal before the No. 1 Mavericks topped the No. 4 Negaunee Blasters 13-2 in the other semi.

Channing didn’t waste any time getting on the scoreboard in the title game, with leadoff hitter Lane Holsworth scoring on a base knock to center from Wade Holsworth to make it 1-0 in the top of the first.

Despite two of the first three Railroaders hitters getting on base, Adriano rang up two Ks to get out of the inning without further damage.

Prentice tied things up in the third with a two-out double to left field, scoring Larsen to make it 1-1.

Then the Mavericks took the lead for good in the fifth.

After Spear got on via a walk, Sexton fanned Adriano before hitting the next batter, Larsen, with a pitch. Trouble began when the next batter, Spencer Larson, hit what appeared to be a routine ground ball to shortstop.

With Spear standing on second base after the Larsen hit-by-pitch, Railroaders shortstop Lane Holsworth opted to throw the ball to third to try and get Spear out as the lead runner.

Channing third baseman Wade Holsworth missed the throw, allowing Spear to sprint home to give the Mavericks a 2-1 lead.

After that, Prentice grounded out but scored Larsen, who had advanced to third on the previous error, to make it 3-1.

Adriano allowed two of his five hits in the seventh, with Barry Holsworth leading things off with an infield single. But Holsworth was forced out at second as Conor Berndt reached on a fielder’s choice.

Berndt was then caught in a pickle after Adriano threw to first on a pickoff attempt, and was tagged out between bases for the second out.

Adriano allowed one more hit before striking out Lane Holsworth to end the game and give the Mavericks the championship.

Prentice finished 1 for 3 with two RBIs to lead the Mavericks, while Wade Holsworth was 2 for 3 with the lone RBI for the Railroaders.

While the Superiorland Baseball League season may be in the books, there’s still one game left to play. The Mavericks will take on the winner of the Twilight League, an organization based in the Copper Country, in a battle of Upper Peninsula adult baseball supremacy.

The Twilight League’s Stanton Wildcats won the first contest between the leagues 3-2 in 2017, before the Mavericks won the rematch last year 10-1 to even the series.

The game will be played in September with a date and time to be announced.

It’s never to early to think about next summer either. This year’s edition of Superiorland Baseball was deemed a success, and league organizers always look for new players to join in on the fun.

“Get out and play,” Prentice said. “We’ve got a lot of love and a lot of teams around Marquette, but we can always have more teams and play on more fields.

“It’s awesome to keep playing baseball. I know there’s guys out there that are thinking they still want to play. They’re on the fence between baseball and softball.

“It’s a lot of fun, it’s one night a week, it gives you something to do in the summer and it’s a great group of guys.”