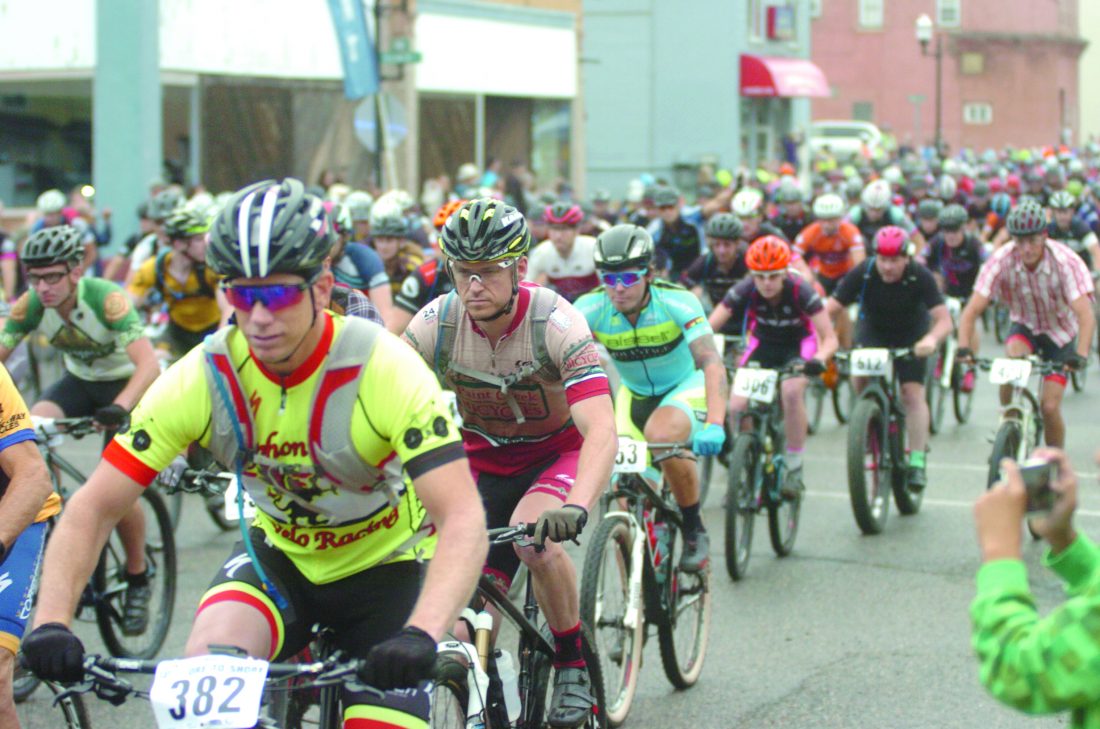 Matthew Lemorande, front left, of Suamico, Wisconsin, is among the pack of bikers at the start of the 48-mile Hard Rock race in the Ore to Shore Mountain Bike Epic in downtown Negaunee on Saturday morning, Aug. 13, 2016. (Journal photo by Ray Bressette)

MARQUETTE — Twenty years is a long time for anything.

If you can get something to last for 20 years, it’s a safe bet to call it a success.

The Ore to Shore Mountain Bike Epic has been nothing short of successful, and race organizers have several things planned to commemorate the 20th annual staging of the event on Saturday morning and afternoon.

Race director Scott Tuma, who’s been spearheading the Ore to Shore for all 20 of its years, said this year is already shaping up to have one of its largest turnouts, with an estimated 2,400 to 2,500 riders expected.

“This is a big year,” he said. “I think gas prices have held steady and the economy is good right now, which helps.”

The race surely helps Marquette County with an economic boost, with riders and their families coming from all over the Midwest and packing hotels, restaurants, gas stations, stores and more.

Just as it’s been for a long time, the Ore to Shore will feature the 48-mile Hard Rock, 28-mile Soft Rock, 10-mile Shore Rock in the morning, and kids’ races that include the 4-mile Junior Rock, 1-mile Little Rock and 1/2-mile Littlest Rock in the late afternoon.

The 48-mile Hard Rock event is touted as the Midwest’s largest mass start, point-to-point race, stretching from downtown Negaunee to a finish at Lakeview Arena in Marquette.

Tuma said race officials had to make some changes to this year’s course due to some minor wildlife interference, but overall the layout remains mostly the same.

“The course is in good shape again this year,” he said. “We’ve been working hard. The beaver ponds are active out there. The beavers have presented some issues, but it’s turned out really good.”

A lot of the course runs through private land, and Tuma said the race isn’t possible without the cooperation of those landowners.

“The landowners have been great and have cooperated,” he said. “They’re great people, we also have several volunteers coming forward again. It’s going to be a big milestone year.”

To mark the 20th year, Ore to Shore is raffling off a quilt that features all 20 official race T-shirts. The quilt was created by Pam Kauppila of Time Flies Quilt and Sew of Negaunee. Raffle tickets for the quilt can be purchased at Down Wind Sports on North Third Street in Marquette.

Ore to Shore has also teamed up with Upper Peninsula clothing manufacturer Stormy Kromer with hats brandishing the Ore to Shore logo on them to be available for purchase.

The race has also invited all its past winners, and there will be prize incentives for the first to reach certain points on the course.

The first riders to reach Lucy Hill, Misery Hill and then Kirby’s Hill will each receive $100.

“Those are kind of the big things we have lined up,” Tuma said.

This year’s prize for both the top male and female Hard Rock finishers is $1,600. The Soft Rock will pay $250 to both first-place finishers, while returning will be the Fastest Family Challenge, paying out $200 to the family with the fastest average speed. At least three family members must be registered and it can be in any combination of the Hard Rock, Soft Rock, Shore Rock or Junior Rock races.

No event is possible without volunteers, and Tuma said roughly 400 have turned out to help so far, but there’s always room for more.

“We’re always looking for a few more volunteers,” he said. “People can go onto our website and ask where they’re needed.”

Registration for the Hard Rock, Soft Rock and Shore Rock races are open through tonight. For kids events, registration is available until 3:30 p.m. Saturday.

The first event, the Shore Rock, kicks off at 8 a.m. Saturday from Marquette’s Lakeview Arena. The Soft Rock starts at 9 a.m. at Lakeview Elementary School in Negaunee, followed by the Hard Rock at 10 a.m. in downtown Negaunee at the Silver and Iron streets intersection.

Kids events start at Lakeview Arena in Marquette, beginning with the Junior Rock at 4 p.m., Littlest Rock at 5 p.m. and Little Rock at 5:15 p.m.

All races end at Lakeview Arena, and the day concludes with an awards ceremony inside Lakeview at 6:30 p.m.

For spectators wanting to view the starts of the 48- or 28-mile races, park legally in city lots or on the streets in downtown Negaunee for the Hard Rock or at Lakeview Elementary School or nearby streets for the Soft Rock.

For spectators wanting to view the finish, people are asked to park in the east parking lot of the Berry Events Center, as there will be limited parking at Lakeview Arena.