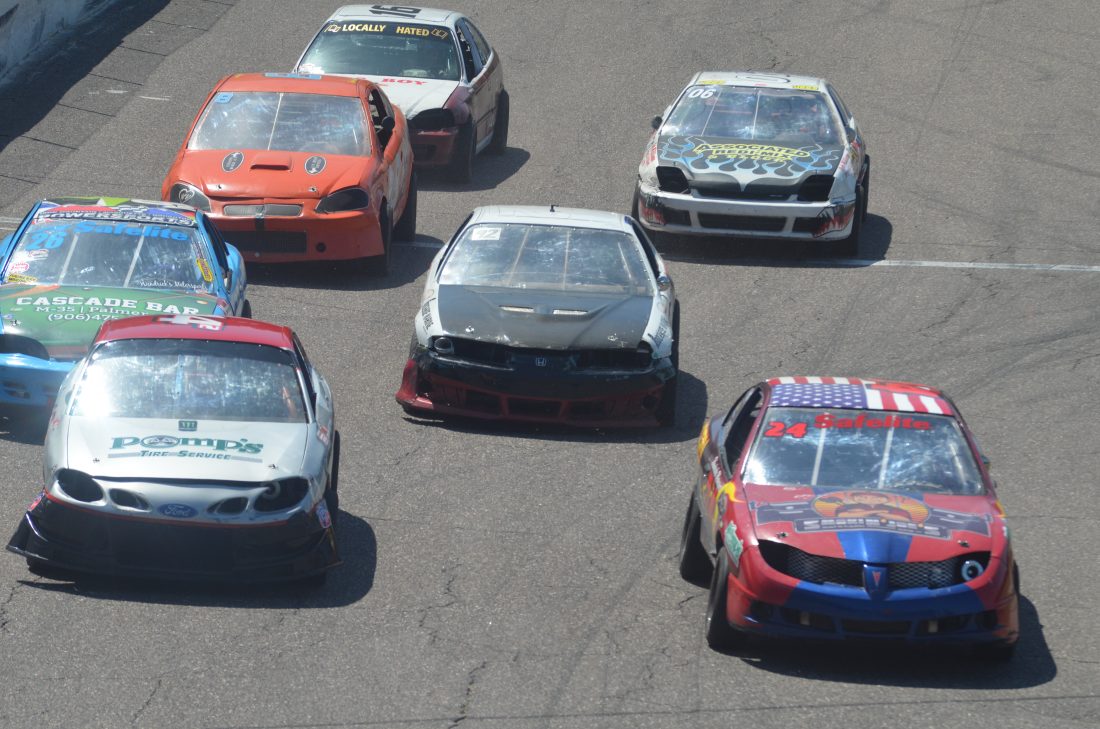 SANDS TOWNSHIP– Race fans who made their way out to Sands Speedway on Sunday afternoon weren’t just there for great racing, they were there for a great cause.

Clear skies and 80 degree temperatures made for a perfect day at the track for the sixth annual Jim Meske Memorial Race supporting Cancer Care of Marquette County. It was Week 8 of action at the track, and action might be considered an understatement.

However, the most dramatic race of the day came in the Super Stock and Fuel-Injected Experimental combined feature, which saw the largest field of the season. There were 14 cars, and Ray Keskimaki held off Ross Olsen Jr. in an eventful 30-lap race.

Keskimaki, second in the Super Stock standings behind Ross Olsen Sr., was forced to hold off a hard-charging Olsen Jr. in the final half of the race. Olsen Jr. took his father’s place in the No. 29 car this week for the Jim Meske Memorial. Olsen Jr., who used to race regularly at Sands, now lives in the Chicagoland area and comes up to compete in the Meske Memorial every year.

Olsen Jr. was forced to work for that second place finish after starting 11th out of the 14 cars. For the first half of the race, Olsen Jr. was stuck behind Keskimaki and Gary Stanaway, who were both battling side-by-side in the middle of the pack. Olsen Jr.’s patience eventually ran out, spinning Stanaway in turn three on an inside pass attempt, bringing out the caution with 17 laps to go.

Olsen Jr. was immediately seen tapping the roof of his car, indicating he took fault for the accident.

“I felt like I was most of the way up his door, but I just think it was a little bit too soon in the race to make an inside dive like that,” Olsen Jr. said. “I don’t think he was 100 percent clear on the outside either. It was just a racing deal. We talked right after and things are good.”

Out of the fray, Keskimaki restarted on the front outside row with Parker Cain, a regular at Norway Speedway, on the inside.

A lap couldn’t be completed without another spin, this time Cain getting into Keskimaki toward the end of the backstretch, which brought out some displeasure among the drivers.

After the incident, the two rubbed a bit of paint on the caution laps and traded words as well. Cain was eventually sent to the pits for causing the spin, shortening his day in the feature.

Keskimaki said he and Cain had a lane dispute, which led to the incident.

“He evidently thought that he was in the lane that I was,” he said. “I’m not completely sure. I haven’t seen videos, so I hate to speculate, but I felt like I got hit.”

Asked what was said between the two under caution, Keskimaki said it’s likely not suitable for print.

“I don’t know if that can be repeated,” he said. “I let him know I was a little displeased.”

Nonetheless, Keskimaki was visually pleased post-race after winning the next chapter of what’s been a season long battle among him and the No. 29 car.

Olsen Jr. appeared to have the faster car, riding the bumper of Keskimaki for the entire second half of the race, but Keskimaki used lap traffic to his advantage to hold off Olsen Jr. all the way to the checkered flag.

The No. 25 car of Darryl Britton finished fifth overall in the feature, and was the first of the Fuel-Injected Experimental cars.

With two weeks remaining in the season, the standings are tight in all five classes as of last week. Maki leads the Four-Cylinder Modifieds standings with 627 points over Reece Cavin who had 578 going into this week. Bill Hammond leads Anthony Karnack by 10 points in the Four-Cylinder Stock standings.

The Olsen No. 29 car had 740 points going in to Keskimaki’s 650, while Victoria Hawley leads the Fuel-Injected Experimental class with 673 points over Elliot Samppala’s 617.

The Late Model division is tight as well, with Goodwin accumulating 722 points going in to Charlie Bell’s 707.

Racing, controversy and drama aside, there was something much more important to be done off the track, and that was honor Jim Meske.

Meske passed away from cancer in June 2014, and is a relative of the Olsen family. He played a major role in reviving Sands Speedway, and the track has honored him with a race in his name since his passing.

“When the track started getting going again, he was a big part of it,” Ross Sr.’s wife Joelle Olsen said. “He loved this track, and he loved every driver, and every driver loved him.”

Trophies for the race were donated to be presented to the feature winners, and bucket raffles with hundreds of door prizes ranging from gift baskets to various racing memorabilia and other miscellaneous items were held. All the proceeds from the event, including the 50/50 drawing, went to Cancer Care of Marquette County.

“Everybody loved him, so when he passed away, we were like ‘this is what we’ve got to do,'” Joelle Olsen added. “Cancer Care of Marquette County was very good to Jim (Joelle’s father-in-law, Ross Sr.’s stepfather). He had prostate cancer for a long time and they were so good to him. They paid for medical expenses and travel expenses, so we thought what better way to give back.”

Over $1,000 in cash was the estimated total raised for Cancer Care of Marquette County.

Meske was Olsen Jr.’s grandfather, and Olsen Jr. sees it as an honor to make it up for this one race every season.

“Back when we all started doing this in the first 10 years of the 2000s, my grandpa had a huge influence on this place,” he said. “If it weren’t for him, we would’ve never done it. He forked over cash, he was always here and he always wanted to see us do good.

“When he got sick, it was really hard to come here without him for a while. So when this happens, regardless of where the money goes, as long as it’s going to help somebody who’s fighting with that, we’ve been through it and we know what it’s like.

“To have everybody out here, just to come together as a community and do all this for cancer care, it’s pretty awesome.”

After seven consecutive weeks of racing, Sands takes an off-week this coming Sunday before returning to action on Aug. 18 for segment two of the first ever Central Upper Peninsula Racing Series. Norway hosts segment one two days prior.

Each track will operate the under the same tire and other rules for the CUP Series, and drivers will be able to compete in lower classes over the weekend event as well.

The season championship at Sands will be held one week later on Aug. 25.