Clements in middle of contenders for UPGA title 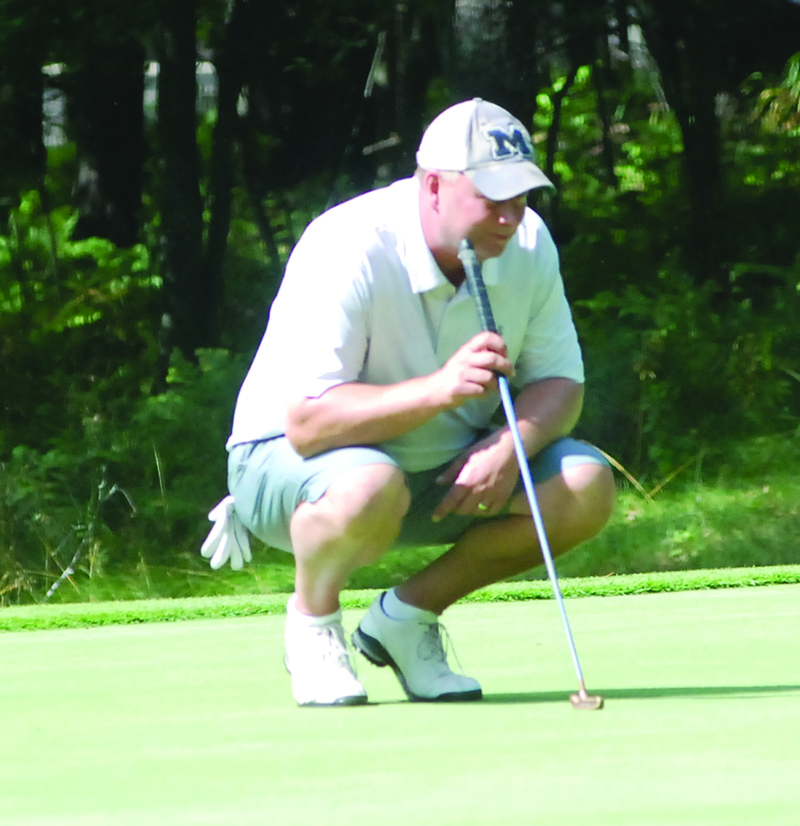 Mark Clements of Ishpeming and the Wawonowin Country Club eyes up a putt on the 16th green during the third round of the Upper Peninsula Golf Association men’s championship tournament at Terrace Bluff Golf and Country Club in Gladstone on Friday, Aug. 9, 2019. (Escanaba Daily Press photo by Justin St. Ours)

The University of Detroit golfer, who’s three-day total stands at 4-under 212, holds a one-stroke lead over Mark Clements of Ishpeming and the Wawonowin Country Club going into today’s final round of the four-day event.

“We had an enjoyable day,” said Brian Robinette of Escanaba, who’s third at 214 after shooting 73 on this sunny, mild and breezy day. “Bryce played a wonderful round today. The top six to eight guys have a shot at the title. It’s going to be fun. I think Day 4 is going to be very interesting.”

Clements, who was two strokes back after Day 2, moved into second by recording a 70 on Day 3.

“I got a little defensive today with my putter. My ball striking was fine. I hit the ball well enough to shoot a decent score and played myself into the final group. A lot of real good players are working their way into the mix.”

It marked the second straight 70 for Douglas, who was a stroke behind Robinette and recent Gladstone High School graduate and this year’s U.P. Division 1 prep champion Rudy Peterson after Thursday’s round.

Fellow Terrace Bluff members Peterson and Matt Argall are tied for fourth at 216.

“I didn’t hit my drives very good and struggled with my putts today,” Peterson said after shooting 75 Friday. “The breeze affected my shots on some holes, although I just wasn’t hitting good shots. I thought I played relatively smart. I didn’t try to force things. I just have to forget about today and try to play better tomorrow. I need to shore up my short game.”

Argall, who was born and spent his early years living in Ishpeming, remained consistent with a third consecutive 72.

“I had one bad hole, the same as the last two days,” he said. “I missed a couple putts on the first four holes, although there’s a lot of chances out there. Every hole is a birdie hole.

“I think I missed three greens, which isn’t bad, but everything was 12-15 feet from the pin. Those aren’t easy shots by any means. Yet, you expect to make a few. I struggled with my short game on all three days.

“For some, I’m sure the breeze is a factor, but we’re in the woods. I don’t think it’s that much of a factor.”

A second straight 73 posted by Escanaba’s Mark Gauthier left him in sixth at 218.

“I’m right there,” he said. “Overall, I played a solid round. I thought I hit the ball off the tee real well. Only, I need to hit a few more putts. I probably missed a few 8-12 footers, but I also hit a few. It all evens out.

“On (par 4) No. 13 I was thinking birdie all the way. Then, the ball sailed over the green and I hit a chip shot for par. I’ll take that.

“Playing your own ball for four days is a grind, but it’s all part of golf.”

Tom LaVigne of Pine Grove in Iron Mountain and Chad Tirschel of Oak Crest in Norway are tied for seventh with 220, followed by Negaunee native and Northern Michigan University golfer Carter Mason and Pine Grove’s Jim Markell at 221.

Play was to resume this morning at 8:30, with the first foursome of the championship flight taking off at 10:45.