Blast off for Negaunee Blasters: Blasters use pair of big innings for 22-2 win in Superiorland Baseball playoffs 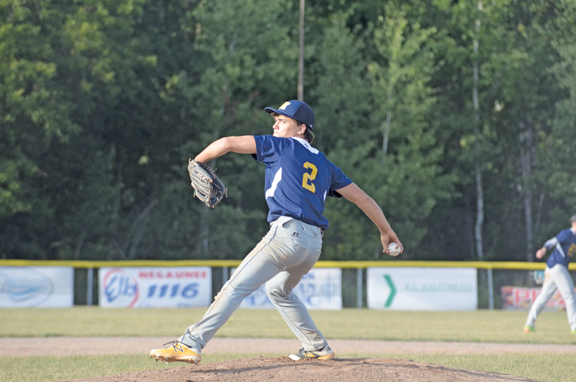 NEGAUNEE — You could say that the Negaunee Blasters offense is definitely lifting off as it gets ready for Saturday’s Superiorland Baseball League semifinals and finals.

That’s because the Blasters used 21 hits to top Jill Leonard State Farm 22-2 in six innings at Irontown Field on Monday night in order to advance to Saturday’s final four.

Monday’s tilt between the Blasters and JLSF served as the league’s play-in game, with Negaunee advancing to take on the No. 1 seed Marquette County Mavericks. The other semifinal will feature the No. 2 seed Channing Railroaders versus No. 3 seed Coldwell Banker-Craig Heinonen.

The Blasters produced a 10-run first inning and never looked back as starter Taylor Laurin made his season debut on the mound. He went all six innings, striking out three and walking two while allowing just four hits.

Negaunee sent 14 batters to the plate in the first inning alone, with a bases-unloading single to right field from Julian Hornback quickly making it 3-0. Hornback had five RBIs in the inning, with another single good for two runs in his second go-around.

Jaren Kipling drove in two runs in the inning, while Brian Esqueda, Jayce Kipling and Carter Richardson each knocked home one.

After going scoreless in the second, the Blasters added 12 more runs over the final four innings to cruise.

Jill Leonard-State Farm’s two runs came in the first two innings. Ben Murphy came home to score in the first after a triple to center field, while the second-inning run was an RBI double by Curt Kowalski, which brought home Eli Debelak.

Shane Johnston started on the mound for JLSF, going 2 2/3 innings before leaving in favor of Kowalski.

Johnston allowed 14 runs on 14 hits, striking out three and walking one.

Kowalski went the next 2 1/3 innings, allowing seven runs on six hits, striking out one and walking four.

Murphy went the final inning, fanning two and allowing one run on one hit.

Hornback led the Blasters with his five RBIs and four runs scored, going 3 for 5 at the plate. Jaren Kipling and Argall each finished with three-RBI nights as well.

The Mavericks played at Channing Monday night to decide the No. 1 overall seed on Saturday. The incentive for earning the 1-seed is being the home team for the semifinal round and championship, if they get that far, and the ability to choose what time they want to play the semifinal.

The Mavericks earned that right by topping Channing 5-3, going up 4-0 after two innings before the Railroaders made it a one-run game after five.

Hunter Larson came around to score an insurance run in the sixth as Steve Hintsala earned the save on the mound.

The Mavericks face Negaunee, which is the No. 4 seed, and have opted to play in the second semifinal. The first semifinal between Channing and Coldwell Banker-Craig Heinonen begins at noon, with the second game starting approximately a half hour after the first, tentatively scheduled for 2:30 p.m.

The championship game time is also a tentative 5 p.m., with all games held at the Irontown Field.