UPLGA whittles field down to eight 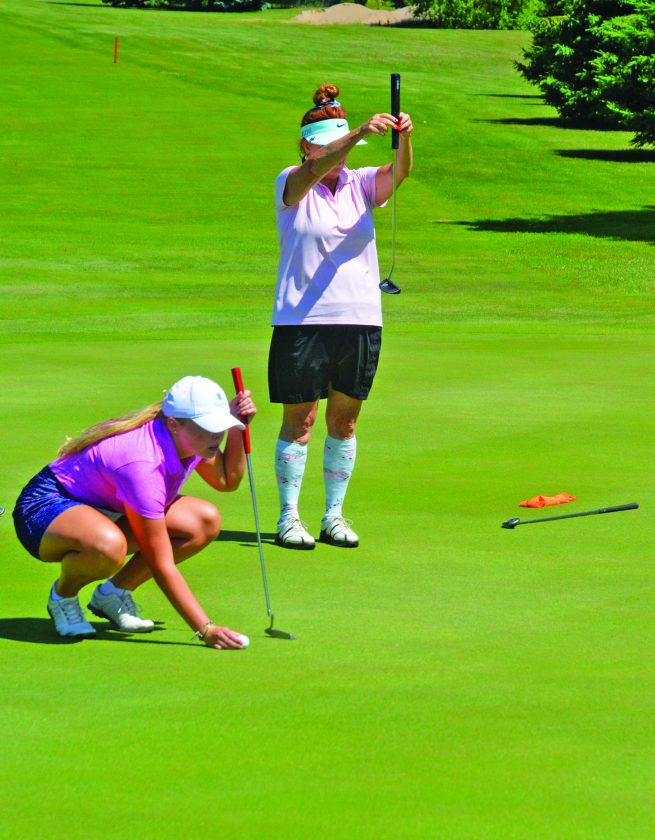 ESCANABA — The field of 40 women playing for the Upper Peninsula Ladies Golf Association (UPLGA) championship at Escanaba Country Club has been cut to eight.

16 women advanced from Saturday’s qualifying round to Sunday’s match play championship flight, where that number was cut in half, setting up today’s quarterfinal round beginning at 9:30 a.m. EST.

Among many close finishes, Sunday’s best match may have been Wakefield’s Nancy Osier against Iron Mountain’s JoAnn Poncino. Osier led Poncino by two holes with two holes to go, but Poncino rallied to win the last two holes and force a sudden death tiebreaker on hole 1.

Poncino’s drive hit a tree and came back into the fairway, but she recovered nicely with a chip that set her up to finish the hole at an even par 4. Osier’s first two shots put her in a much more favorable position, allowing her to birdie on an eight-foot putt to seal the victory.

“JoAnn’s drive actually hit a tree and then came back into the middle of the fairway, and we both hit good second shots,” Osier said. “JoAnn just had a miss-hit on the third shot. She shot it a little short of the green and I had a real nice shot, but JoAnn does what she does so well — chip and putt. Even though her chip went a little long, it was on the back fringe so she made her putt for a par. I’m not the best putter, but for once I made my putt.”

Another exciting match took place between a pair of locals — Escanaba’s Barb Scott and Gladstone’s Lori Shea. After Scott tied up their match with a birdie on hole 13, Shea finished strong to win the match by two. Scott — the defending Senior UPLGA champion and a 14-time ECC club champ — conceded on hole 18 when Shea had three putts left to seal the win from five feet.

“That was a very classy move,” Shea said. “First of all, it was a real good match. She birdied on hole 10 and 13. You can’t do anything about that, so I just plugged along. Unfortunately, she had some tough holes and I just capitalized on it. I played much better than I did yesterday, and I just got in my zone and that’s what I needed to do to come out on top.”

Shea admitted she initially wasn’t thrilled about playing Scott on her home course.

“When I saw I was playing Barb, I was like ‘darn.’ It’s her home course,” Shea said. “She played good yesterday, she has been playing good and so I knew I had a tough match and didn’t take it for granted by any means. I’m just glad I stuck with her and was able to capitalize.”

Escanaba’s Paxton Johnson — the defending champ and the tournament’s No. 1 seed after shooting an 80 Saturday to win medalist honors — defeated Vulcan’s Tammy DeBakker on 15 holes. Johnson felt she wasn’t playing her best early, but picked it up as the match went along.

“My short game definitely heated up,” she acknowledged. “I got more comfortable with my putts and my chips onto the green because I only hit four greens today, so I really needed to scramble.”

Johnson will play Vulcan’s Kathy Gagnon today in the quarterfinals.

“I just need to stay level-headed because I did get a little frustrated at myself today, which didn’t help,” she said. “I just need more control with my approach shots. I need to hit greens in order to make birdies and my putts.”

Tomorrow’s quarterfinal match-ups include Johnson vs. Gagnon, Shamion vs. Bergman, Osier vs. Constantini and Dube vs. Shea.

“There were some big upsets in the first round of match play,” ECC golf pro Jeff Rae said. “It’s going to get very interesting from this point on. Weather could also play a major factor the next two days. The championship match is set for Tuesday at 1:00.”

The losers of the championship flight now enter a president’s flight beginning this morning at 9:50. The rest of the field has been divided up into three flights of eight.