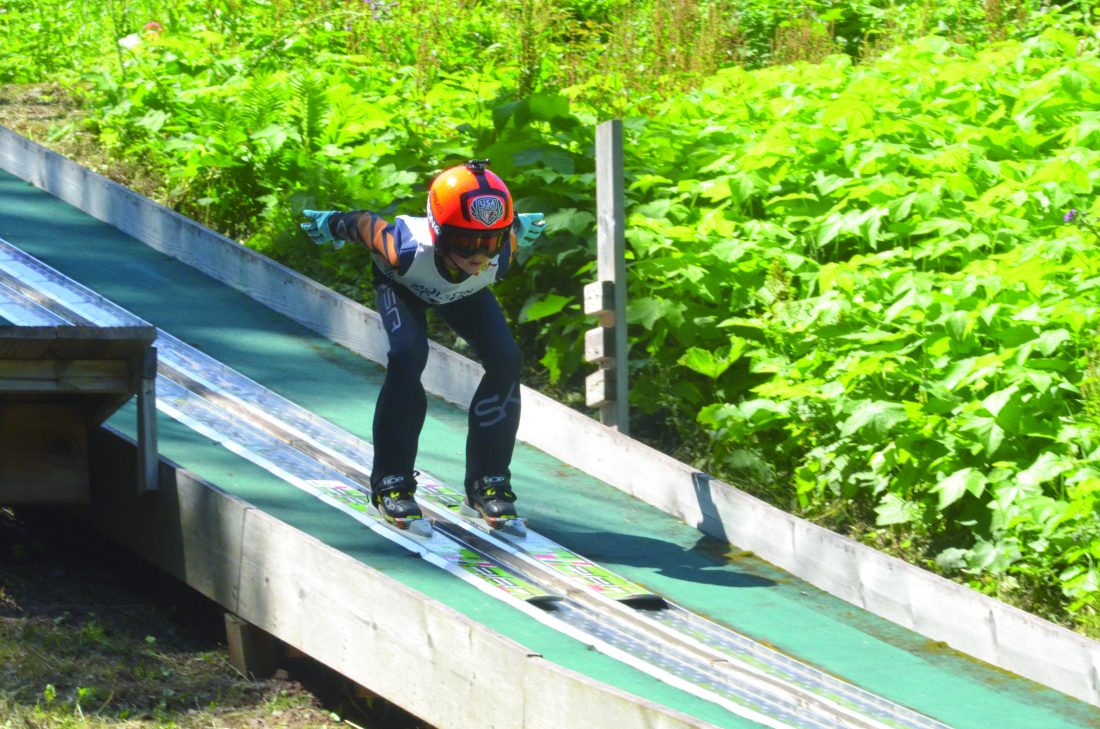 ISHPEMING — The Upper Peninsula was hit with some beautiful sunny weather this weekend, making for a perfect weekend of summertime ski jumping.

The Ishpeming Ski Club hosted an estimated 25 kids over the weekend, ages ranging from 5 to 17, in the club’s third annual Ski Jumping and Nordic Combined Training Weekend at the Suicide Ski Bowl.

Participants included those who ski regularly with the Ishpeming Ski Club, along with kids who traveled from other parts of Michigan as well as Wisconsin, Minnesota and Illinois.

Gary Rasmussen, head ski jumping coach at the Ishpeming Ski Club, said this year’s summer training session was just as big of a success as the previous two years they’ve hosted the event.

“Every year we’ve had between 20 and 40 kids and this year is no different,” he said. “Kids from Wisconsin, Minnesota, Michigan and Illinois, which is the United States Ski Association’s Central Division. We’ve had two hard days of training, a lot of kids made great improvements and we’re going to finish up with a tournament.”

The tournament served as a friendly competition between the athletes to wrap up and celebrate a great weekend of summer training.

Emerson McNeally of the Ishpeming Ski Club claimed first place on the 13-meter hill. He was followed by fellow Ishpeming Ski Club athlete Isaac Larson in second. Third-place was a tie between Simon Langer of Cloquet, Minnesota and Isaac Danielson of Colerain, Minnesota.

A $50 registration fee covered food, coaching fees and a full weekend of dry land training for each athlete. Part of the registration fee was also used as a head tax for the U.S. Ski Association to support their efforts. Athletes were able to train and gain experience using the 13, 25 and 40-meter jumping hills at Suicide Bowl.

Amara Rasmussen, age 13, said the summer training session is always a fun event that allows the athletes to get out and loosen their muscles.

“It’s been really fun,” she said. “We also had roller skiing (this morning). We just got new plastic on the 40-meter hill. It’s just a great time to get out here and jump.”

Asked why athletes from four different states flocked to Suicide Bowl for the event, Coach Rasmussen said options are limited within the Midwest for dry land ski jumping in the summer months.

“To be honest with you, the community here is really great at supporting this club and supporting ski jumping,” he said. “Our ski club has a fantastic facility. We have five hills in the winter and three in the summer. (Today) we had our 13-meter, 25-meter and 40-meter jumps that the kids are training on.

“There’s very limited selection in the region to ski in the summer.”

Never put on a pair of skis before? Have no fear, all experience levels were welcome to participate and give the sport a go.

“We’ve got kids here five years old and up this weekend,” Rasmussen said. “Kids that have never jumped in their lives. They put skis on and they’re jumping this weekend. We had kids who put skis on for the first time (yesterday) and already jumped a little hill.

“Anybody who’s curious about ski jumping, come on out, check it out, just watch if you want. You want to give it a whirl? We’ll help you get started. We’ve got all the equipment you need, great coaches and a great facility.”

The Ishpeming Ski Club has weekly jump sessions Tuesday nights beginning at 6 p.m. and Saturday mornings beginning at 10 a.m. through the summer. The public is welcome to attend for those interested in learning more about the sport, or those who want to give it a try. Equipment and coaching are provided.

IRONWOOD — The 11th annual SISU Ski Fest will be held this weekend in and around downtown Ironwood. The two ...