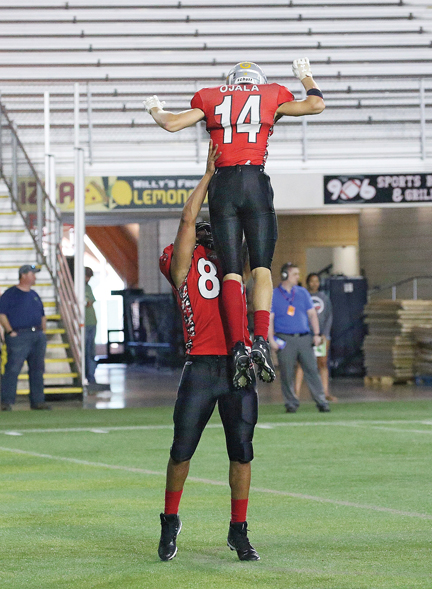 Red team’s Matt Ojala of Calumet is hoisted high into the air by teammate Tucker Taylor of Gwinn after Ojala scored a touchdown in the third quarter of the 12th annual Upper Peninsula Football All-Star Game played at the Superior Dome in Marquette on June 29. (Photo courtesy Daryl T. Jarvinen)

Red team’s Matt Ojala of Calumet is hoisted high into the air by teammate Tucker Taylor of Gwinn after Ojala scored a touchdown in the third quarter of the 12th annual Upper Peninsula Football All-Star Game played at the Superior Dome in Marquette on June 29. (Photo courtesy Daryl T. Jarvinen)

MARQUETTE — Negaunee was among three Upper Peninsula schools receiving donations from the 12th annual U.P. Football All-Star Game that was played in Marquette on June 29.

The Miners, along with Brimley and North Dickinson will each receive $1,000 that can be used for anything related to their school football programs, such as for equipment, weight rooms or uniforms.

Other schools received donations of equipment used in practices and the game. 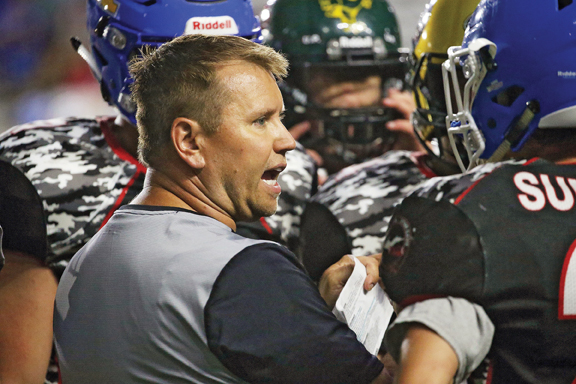 “When this game was started, it was always a goal that we would eventually be able to donate directly to all of the high school football programs throughout the U.P.,” said the game’s director, Todd Goldbeck.

Schools to receive donations are picked at random each year. Once a school has been selected, that school will be removed from the lottery list until all other schools have been chosen once, then the selection process will begin again.

“The lottery is a very fun way to select the schools,” Goldbeck said, adding that programs each year receive the same $1,000. “Every program is eligible, and it does not matter how successful the team is; everyone has a chance and gets a turn.

“It is very important that all U.P. programs are supported, so that each school can maintain a competitive team. I was very pleased to hear that all three schools that were chosen have specific plans for the donations and they will help their football programs in a positive way. That is what the U.P. Football All-Star Game is all about.

“This game would not be possible without the schools providing a positive environment for all of these student-athletes to succeed. Giving back to their football programs will hopefully help each school continue their individual football tradition.”

In addition to the three schools selected, the Black and Red team head coaches receive half of the footballs used during the week leading up to the game. There are 24 new footballs each year, so both each coach — Scott Syrjala of Westwood and Cody Kangas of Manistique — gets to take home 12 footballs that have only been used for one week.

And the game’s practice jerseys are donated to U.P. programs, too. There were a full set of navy blue jerseys to go to Sault Ste. Marie, with the royal blue jerseys given to Brimley. Practice jerseys have the school name printed on them and are their school colors, so they can be used by the schools right away without any further alterations.

Other notable donations included more than 1,500 pounds of food donated through a food drive to the St. Vincent de Paul food pantry, as well as cash donations to the U.P. Sports Hall of Fame to sponsor an annual scholarship, and to Bay Cliff Health Camp, all organizations that rely on contributions from the community.

The 50/50 raffle held during the game sold $1,240 worth of tickets, with the individual winner and the all-star game each receiving $620. The all-star game proceeds were donated to the West Iron County for their assistance in selling tickets.

“When the game is over, I always want to be in a position to say, ‘The All-Star Game did very well again this year. That means we gave back to many different groups/schools and the players had fun throughout the week, while also reinforcing some important life lessons they can take moving forward in their lives,'” Goldbeck said. “That is what All-Star Week is all about. I think we accomplished that again this year.”

Goldbeck also noted these accomplished over the game’s dozen years:

• This year’s players were in first grade during the inaugural game in 2008;

• Every U.P. program has been represented by at least one player;

• Ishpeming, Negaunee and Menominee each have had the most players participate with 51;

• $1,000 donations have been made to 23 programs, practice jerseys to 20 schools and 384 footballs have been donated to an undetermined number of schools;

• 11,500 pounds of food have been collected and donated to the Beacon House and St. Vincent de Paul food pantries;